On Tuesday, July 23rd, we headed south from Cadillac to the misleadingly named Canadian Lakes. Along the way, we saw a sign for an overlook off the highway, and we were immediately intrigued. Michigan has many impressive overlooks, but nearly all of them are on the coasts of lakes. What could this overlook be in the middle of a state that’s pretty much one big plain? 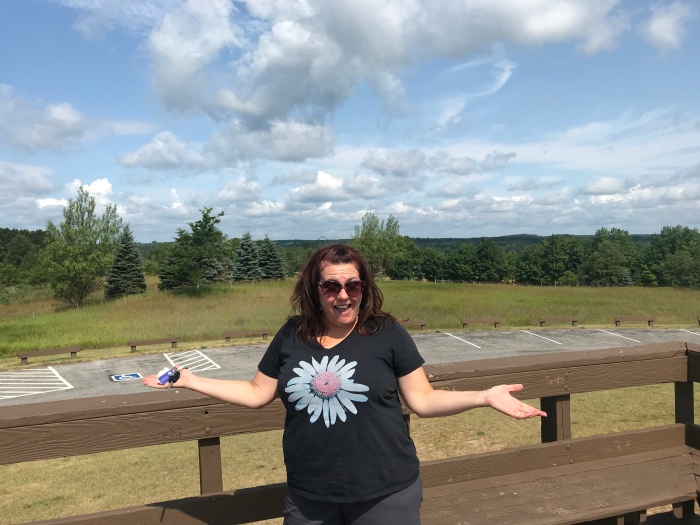 That’s pretty much what we expected.

A bit later, we reached the Brogowicz Lake House and met up with John and Diane, Laura’s Dad and Stepmom, as well as the family of her brother Mark. There we found out a bit of bad news – John’s pontoon boat was in the shop for repairs. To fill the void, Diane devised an activity where the kids would play with concrete. 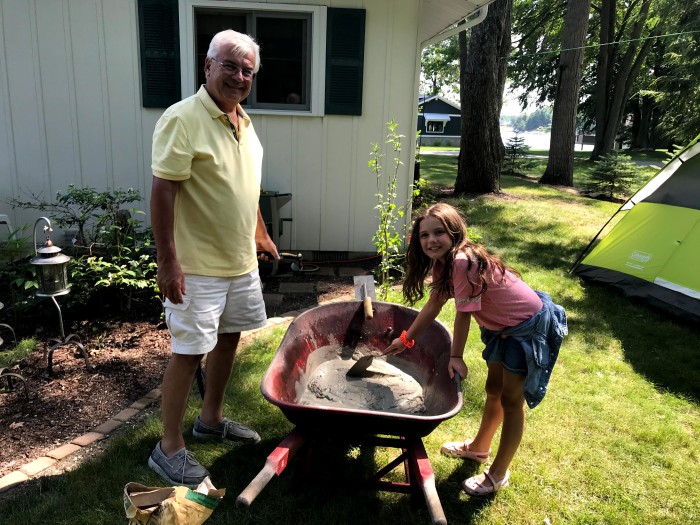 What could go wrong?

Against all of the odds, there was no concrete disaster, no concrete handprints on the house, or clothing, or on furniture. It was a midsummer miracle. 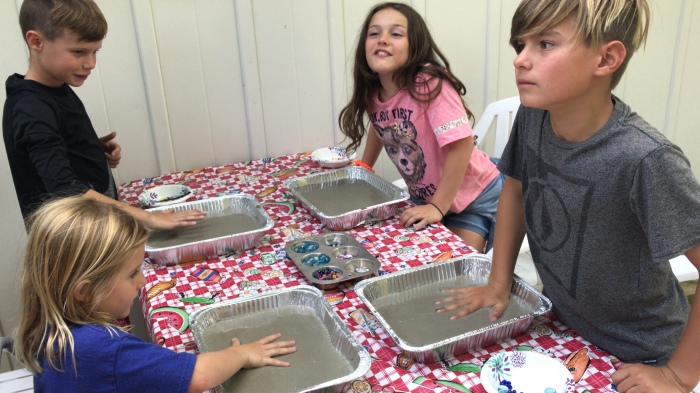 And three out of four people prefer if concrete use is unaccompanied by a disaster.

Plus, as an added benefit to this activity, while we were in the backyard, the children could be misled into thinking that yard work was a “game.”

Whoever collects the most acorns with this acorn vacuum wins!

The next day, building on the miraculously unmessy concrete crafting, John was able to borrow a boat from his friend Frank, eliminating the need for further concrete escapades.

Three out of four people approved of the transition away from concrete-based activities.

We took the boat out to a sandbar on one of the lakes where the kids could play on a giant floating mat.

Very quickly, the novelty of walking on top of water wore off for the children, leading to the jumping and tumbling phase.

Once the kids had exhausted their repertoire of floating mat gymnastic routines, they moved on to catching the many small fish swimming nearby with nets, using bits of pretzel as bait.

Or they could dredge the bottom of the lake, Julia style.

The water around the mat was deep enough and warm enough that parents who had been consuming adult beverages could take care of some basic needs as well. 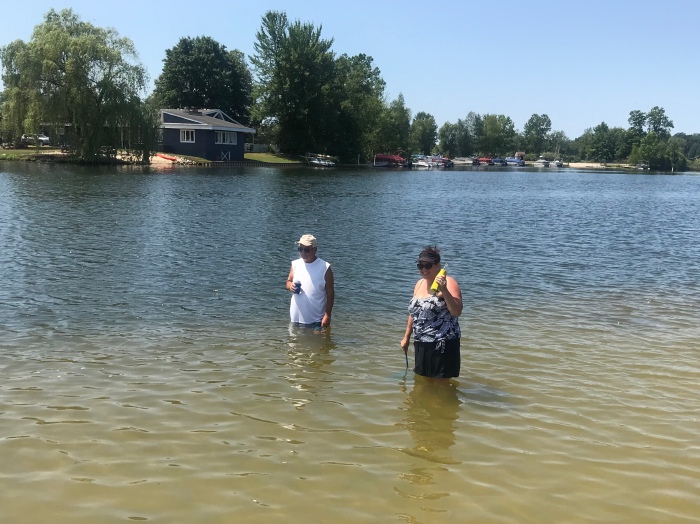 Nothing to see here. Go about your business.

After boating, we visited one of the best places in the Canadian Lakes area, King’s Trading Post, which has delicious ice cream that they serve in mass quantities. 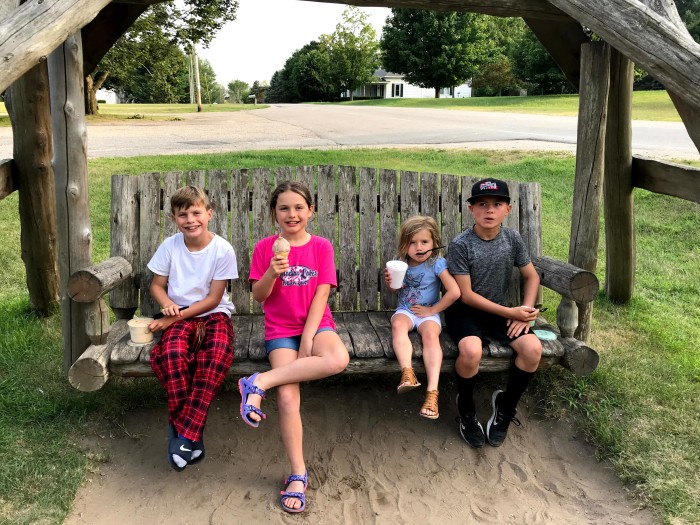 Three out of four people found it acceptable to have their ice cream consumption interrupted by me taking this picture.

The following day, Thursday, was “no wake” day at Canadian Lakes, a day that seems to have been designed by people who hate fun in order to ruin the vacations of people who have four children that need water related entertainment. If the no-wake people thought that the wake restriction would lead to a quiet and peaceful day on the lake, they were sorely mistaken, as our crew was just as capable of shattering the peace and tranquility of Canadian Lakes from the beach. 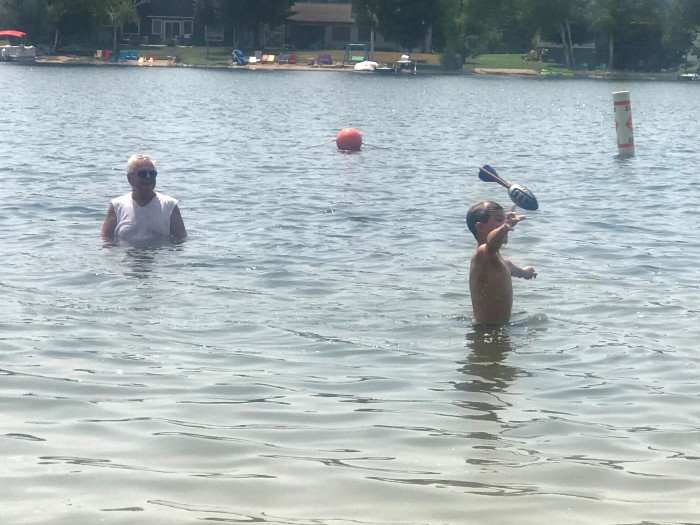 Suck it, peace and quiet!

Once the beach day had reduced the energy levels of the children to a more manageable level, we could take a relaxing evening cruise to see the sun set. 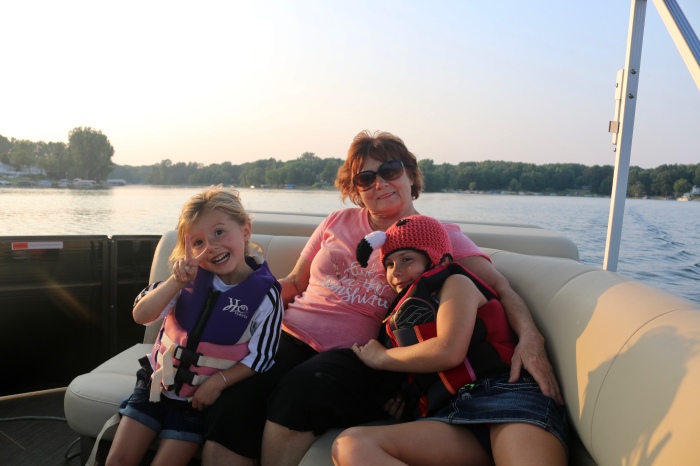 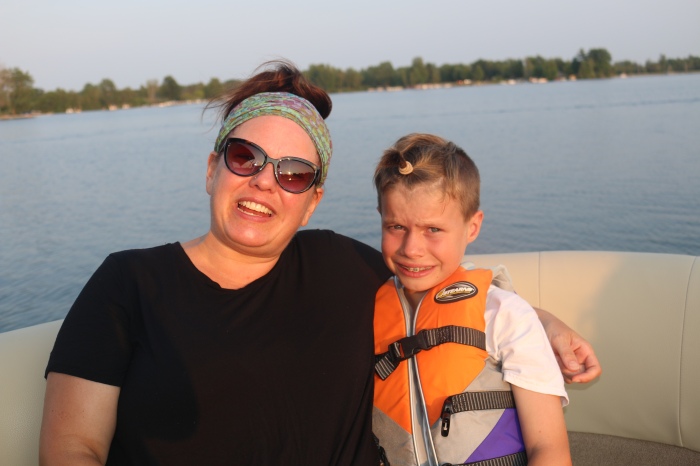 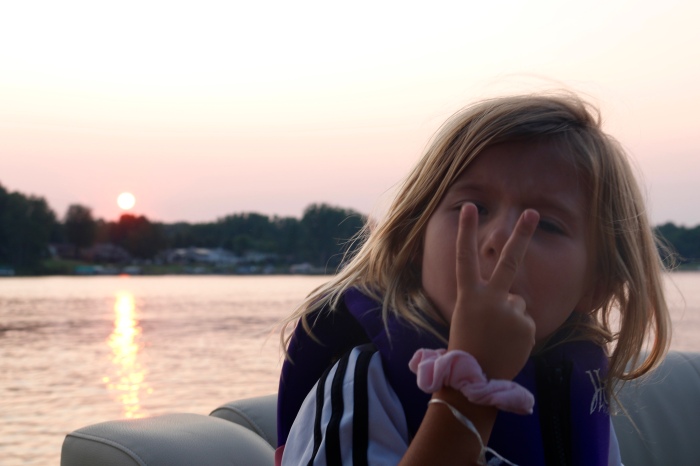 On Friday morning, John, Mark, and I took three of the kids fishing on the boat.

As everyone who has taken kids fishing knows, when children say they like “fishing,” they actually mean they like “catching fish at a rate that must exceed one per minute.” Any lull in the actual catching of fish results in kids reeling in the line and casting it back out constantly, putting everyone in the boat in danger of being hooked or flogged by the rod. Most kids would rather reel in 100 tiny fish than patiently wait for the big one.

Here is a rare look at McKenna between the repeated reeling in and casting.

Realizing the peril we were in with three kids casting at a rate of 1,000 times per minute, we bailed on the boat fishing to fish off of the dock, an area where there are so many fish that I accidentally caught one when the hook slid off the pier and into the water. The cost of this high fish-catching frequency, we thought, was that no one would catch a big fish. This was incorrect.

As is tradition in the United States, morning fishing was followed by an afternoon photo shoot.

Since the fun-killing wake restriction of Thursday had expired, we could return to producing all of the wakes we desired on Friday, and we took the kids tubing using Frank’s pontoon boat. Pontoon boats aren’t made for the speed necessary for a thrill-inducing tubing experience, so the kids took matters into their own hands.

And that’s how McKenna fell forward off the float, onto the rope, and went under the tube.

Some people were undeterred by McKenna’s mishap.

This photo captures the happier times before Mark threw Julia off the tube. FATHER OF THE YEAR!!!

Ten of us were staying at the Canadian Lakes house, so Laura and I brought a tent to sleep in. This mostly worked great, since the tent easily fit our air mattress topped with memory foam topped with Laura’s high thread-count sheets. The system failed on Friday night, when the air mattress developed a leak. 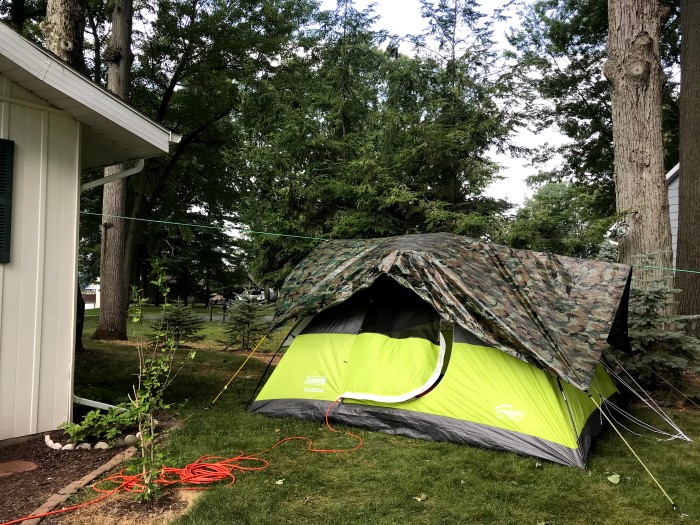 Forcing us to sleep ONLY on memory foam topped with high thread count sheets like savages.

On Saturday, we were leaving for our next lake experience in Caseville. While we dismantled the tent and packed up, McKenna had one more opportunity to fish. 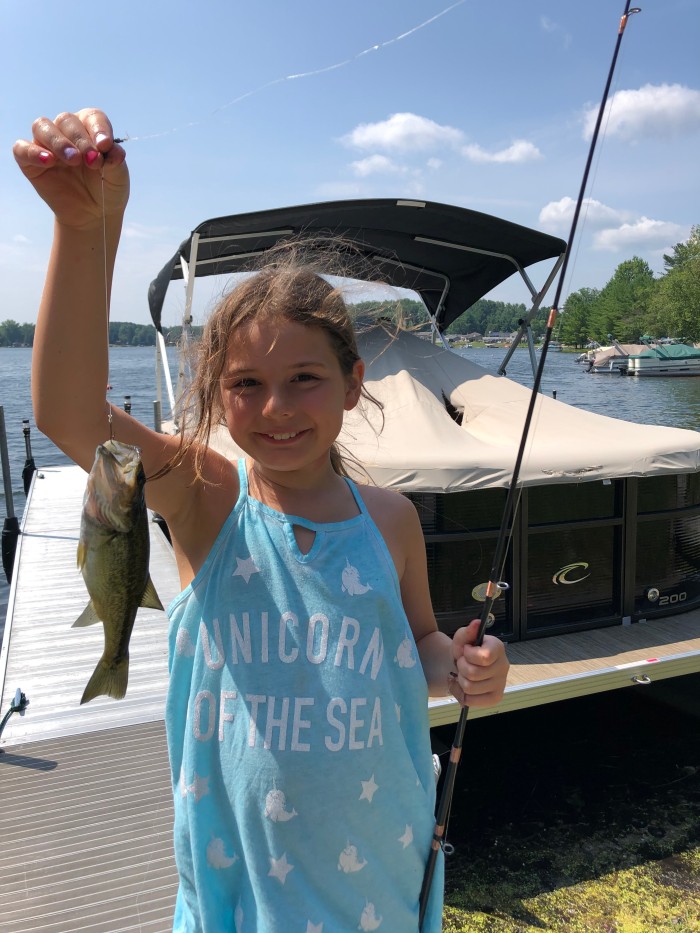 Dock fishing for the win!