On June 29th, our Euro travel group started the next portion of the Italian tour, to Sorrento and Capri. The combination of our early tour of the Academia and highway traffic caused us to miss the stop at Orvieto on the long journey south from Florence.

On the lengthy drive, the travelers found a variety of ways to entertain themselves. 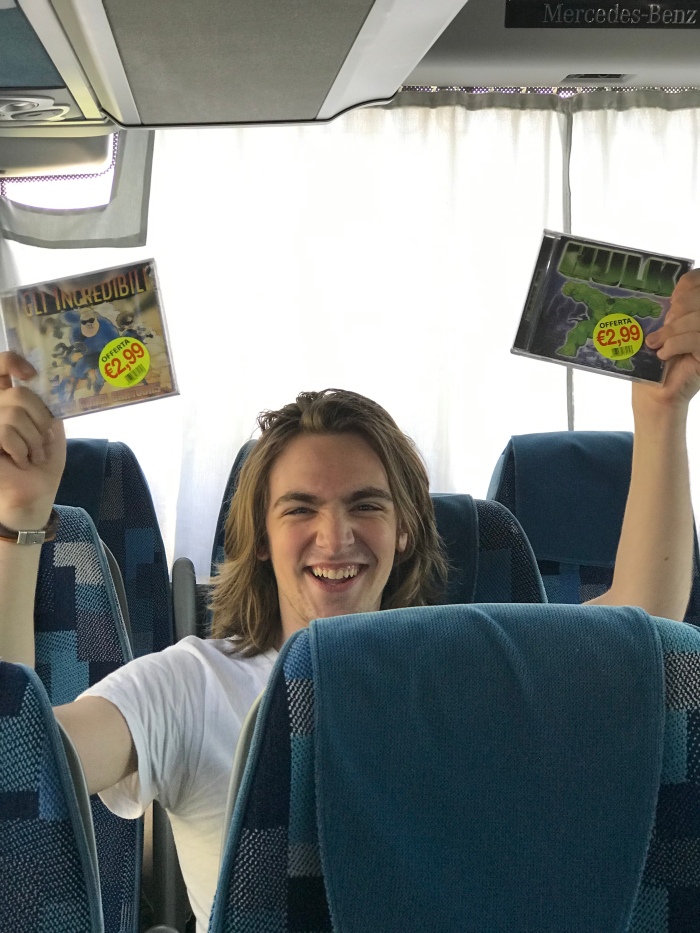 Is that the soundtrack to the Italian knockoff of The Incredibles? Yes, please.

Swinging around Rome and Naples, we finally made it to the windy coastal road that leads to Sorrento.

The views at this point of the drive were spectacular.

At times, there were sheer drops to the side of the road.

To capture the views, the paparazzi was in full effect.

In order to stem the tide of paparazzi mania before someone suffocated a fellow traveler trying to achieve the perfect angle for picture number 5,291of the coastline, our tour manager, Ian, had the bus pull over at an overlook. 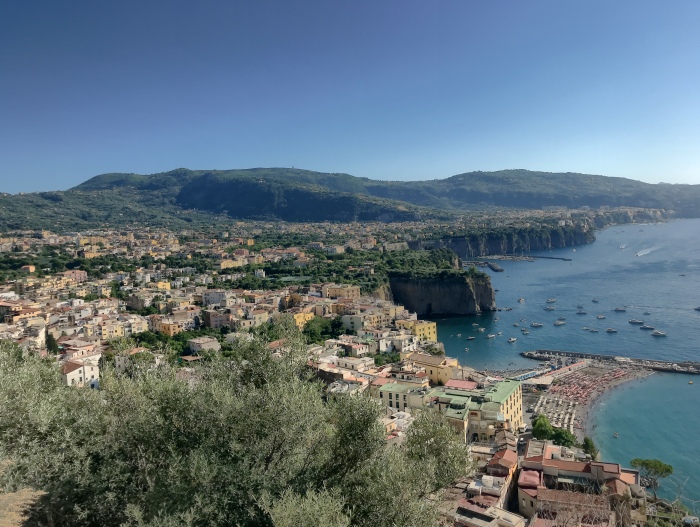 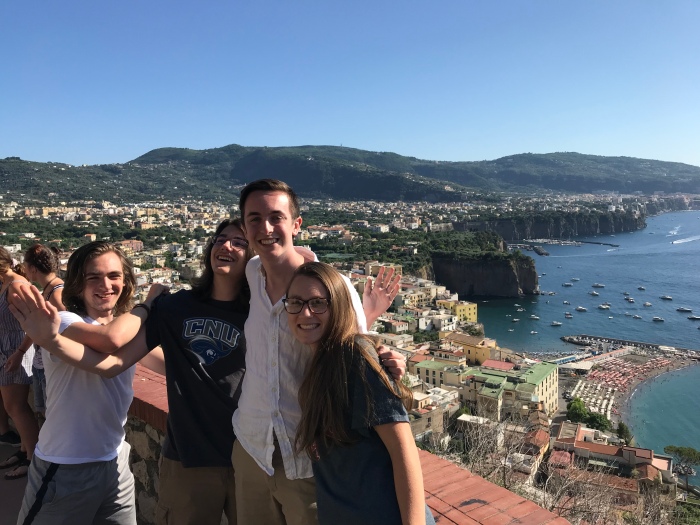 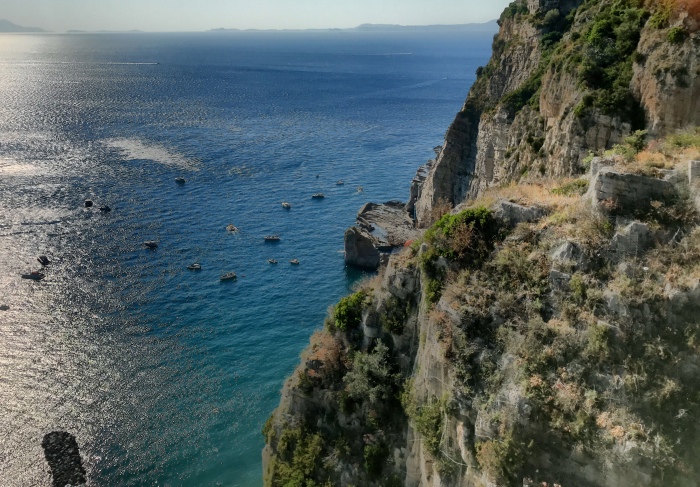 Just as in Florence, the amazing overlook left us duty-bound to take profile pictures. 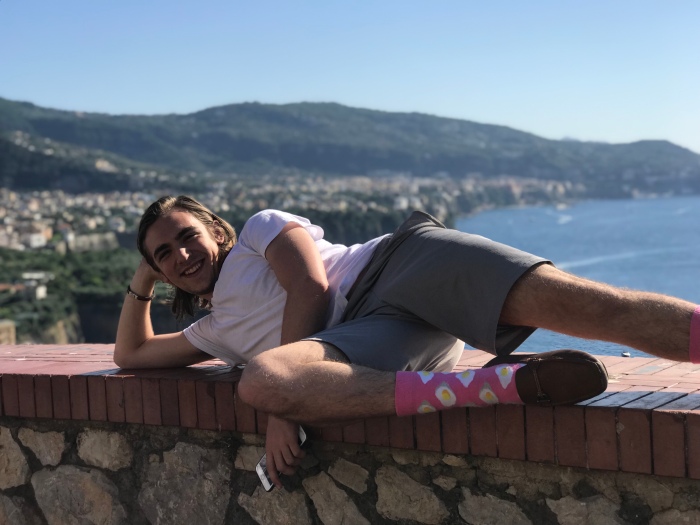 I don’t WANT to do this, I MUST do this.

Shortly after this stop, we made it to our hotel in Sorrento, which was basically a full-on resort.

The proximity of the water brought breezes and cooler temperatures to Sorrento than in Florence. It felt odd to go outside and not spontaneously dehydrate. 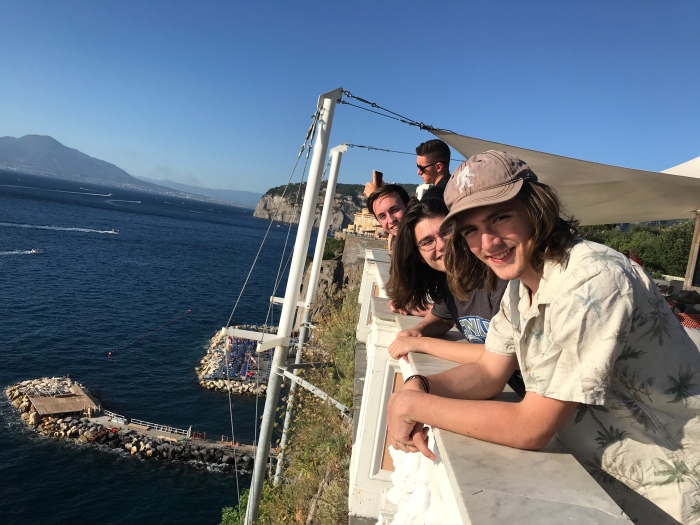 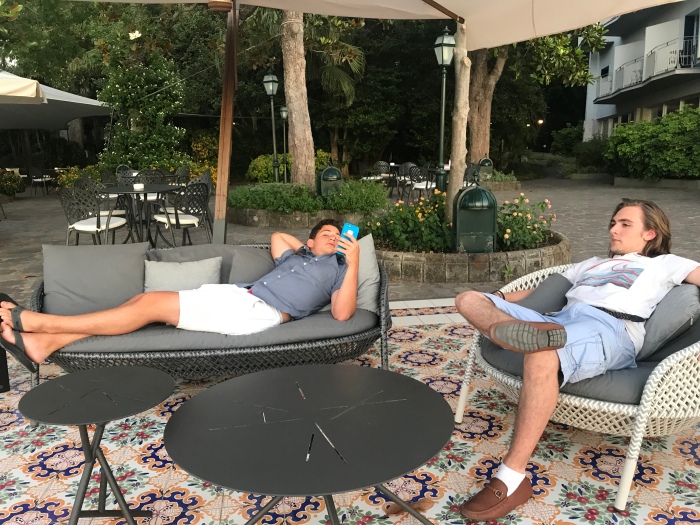 We did our best to class it up. 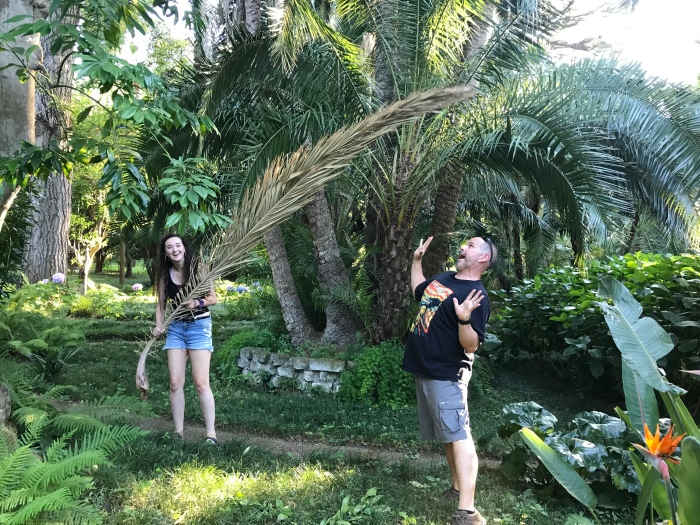 Then we went to dinner at the restaurant in the hotel. They provided a menu to let us know what to expect.

Interesting. It says here that the dessert is “Dessert.” Must be French – Day-Zair.

Dinner ended just in time for sunset. Sunset AND an overlook? That can only mean one thing… 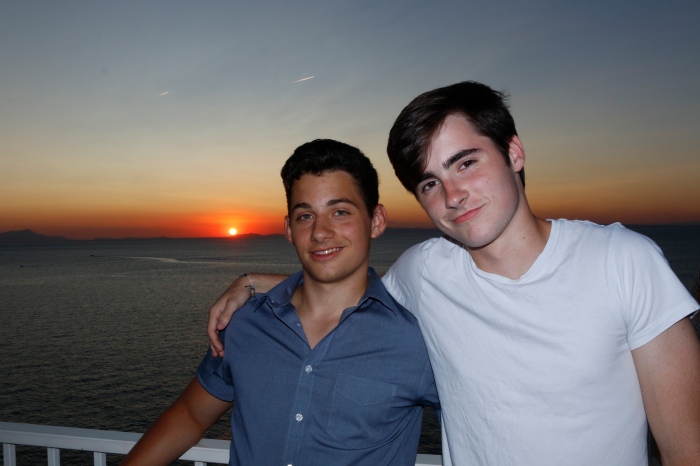 At around nine, we walked the mile or so to the Sorrento city center. On the kind of travel tour we were on, it’s easy to lose track of which day of the week it was. The crowds in the city alerted us to the fact that it was Saturday. 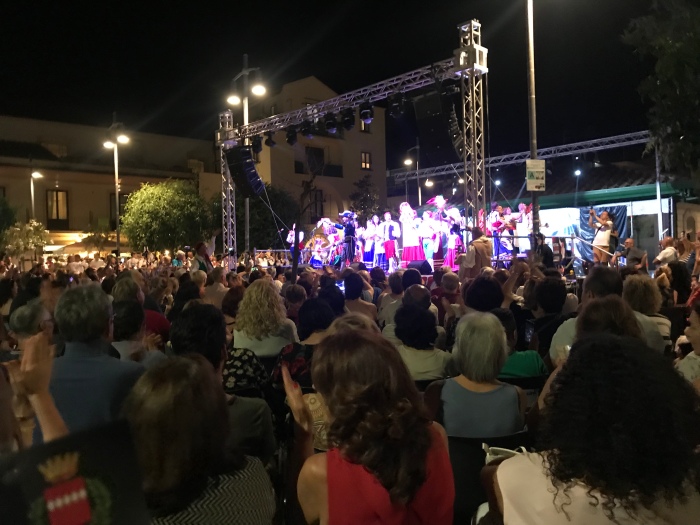 On the way back, one of our travelers, Reece asked if we had ever had a traveler do something really stupid on our previous trips. I said that I couldn’t recall anything that was seriously stupid, which apparently created bad karma, leading to the following door-opening mishaps.

It’s possible that similar things have happened on earlier trips, but my brain, as a kind of survival mechanism, killed those memories. For this reason, I’ve chosen to record these moments here for posterity. You’re welcome, Evan and Kyle.

The next morning, we headed down to the Sorrento harbor for our boat trip to The island of Capri, leaving Sorrento on the 9am boat. 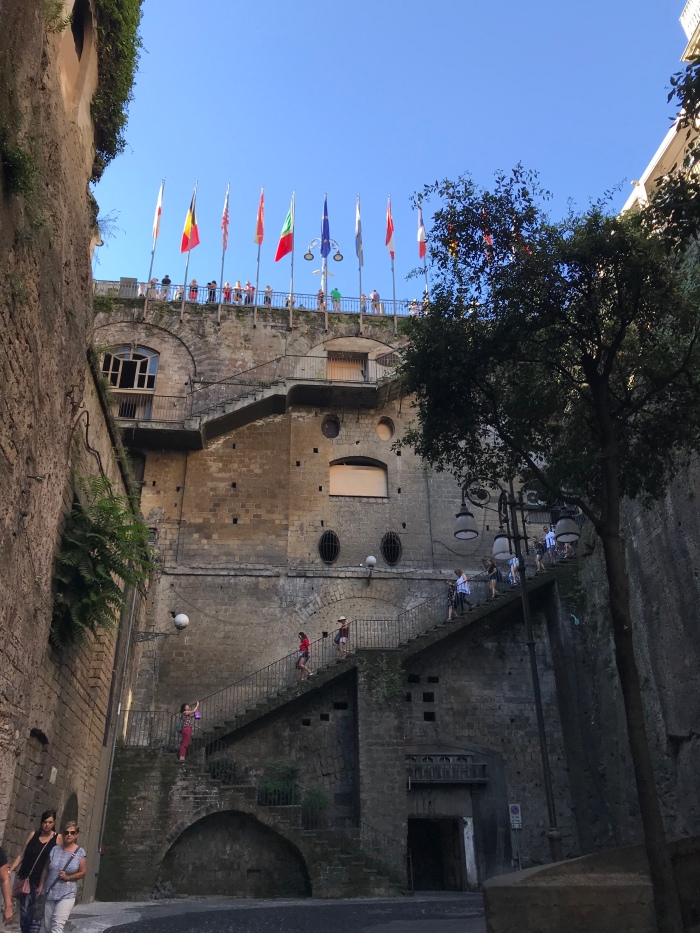 With Sorrento behind us, we made it to Capri around 9:30am and took the funicular up to the shops and restaurants at the top of the island. 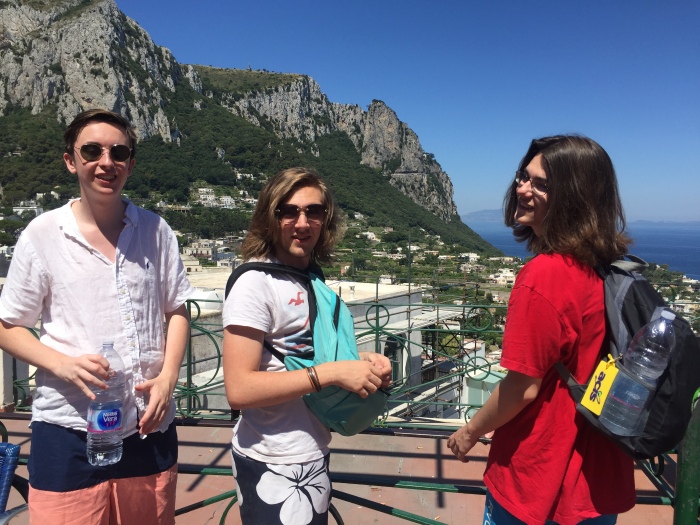 The landings at the top provide great views of the town and water below.

in addition to these overlooks, Capri, as a resort island, has plenty of high-end shops.

At noon, we had scheduled a boat tour around the island. We were almost late to the boat due to a combination of our difficulty in finding the boat check in and Kyle’s bathroom door fiasco, but we got there just in time.

A special thanks to the boat company for not putting a door at the end of this gangplank. 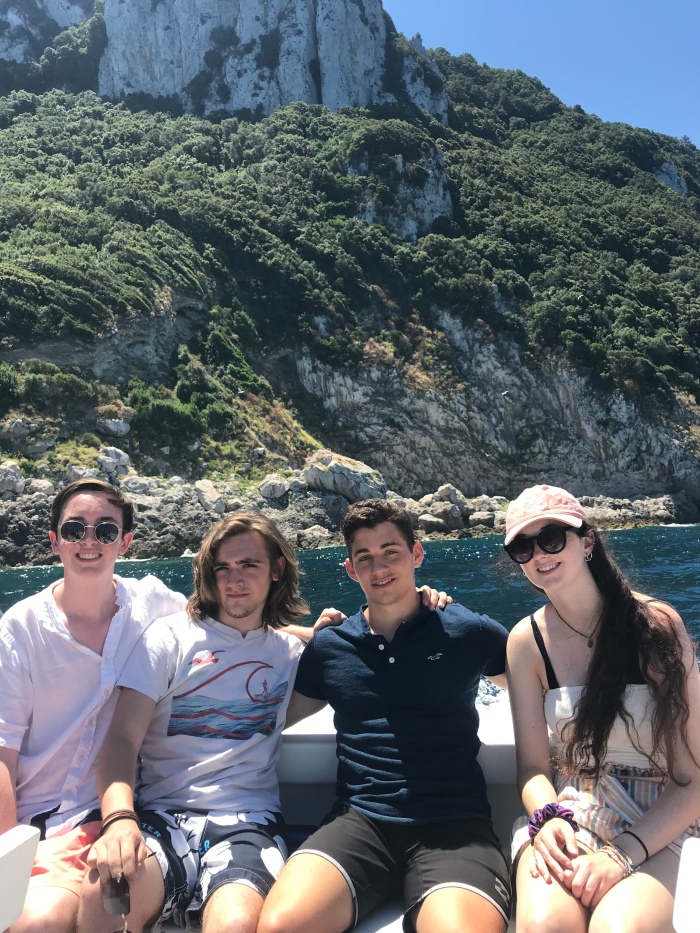 Capri is known for several grottos where the water seems to glow because of the way that the sun reflects off of the sea floor. This is one of the less famous grottos, the Green Grotto.

Apparently, the rich people who shop at the stores at the top of Capri also come to the Green Grotto to hang out at the grotto and sunbathe.

‘Who brought these peasants here?!’

As had been the case on the bus, the paparazzi on the boat was in full effect. 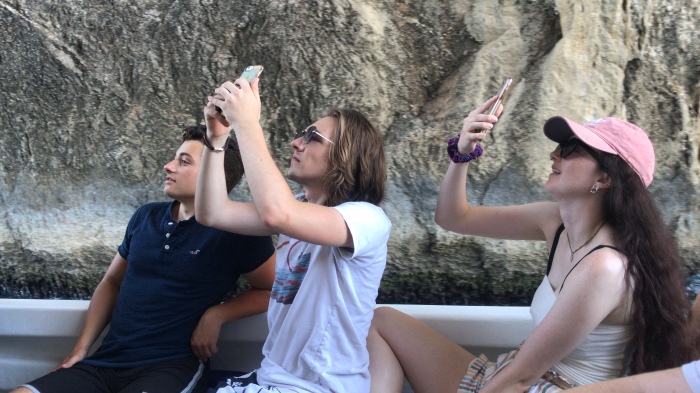 While Capri, like Sorrento, was much cooler than Florence, the intensity of the sun could still have an impact. 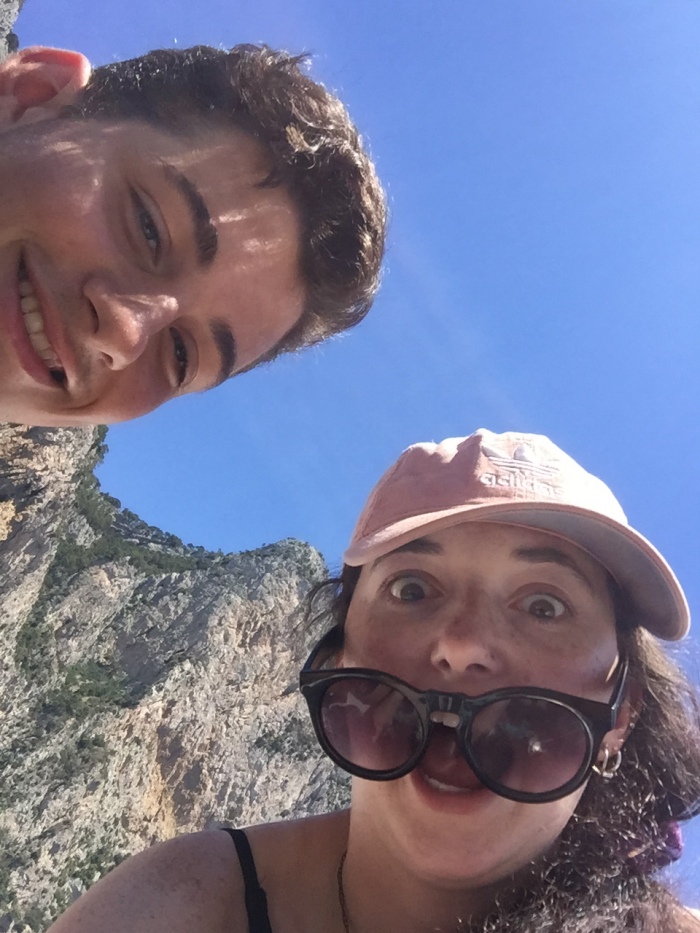 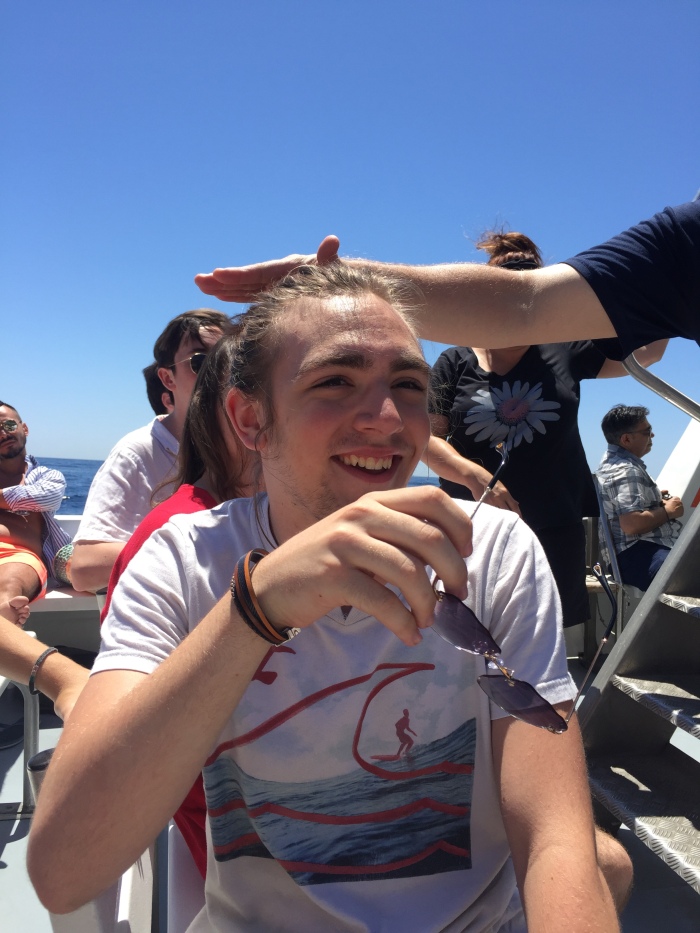 For some, the sun had a more transformative than on others. 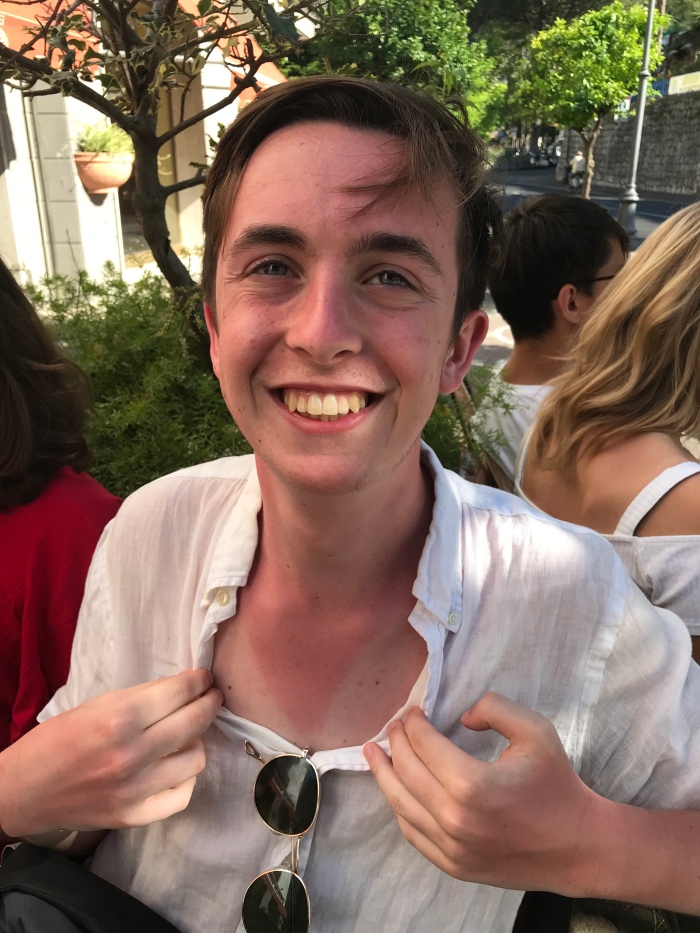 The sea breezes kept us cool enough to appreciate the impressive rock formations of Capri.

One of the main attractions of Capri is the Blue Grotto, but getting in can be a challenge. There is a small, cave-like entrance to the grotto, and the winds and tides have to be right to enter the grotto. Since there was only a slight breeze, boats could go into the grotto…

Which meant 2/3 of the island’s population was trying to get into the Grotto.

Bypassing the two-hour+ wait for the Blue Grotto, we finished our boat tour and headed to the public beach on Capri.

Give that Italy was experiencing a heat wave, the water was actually a bit chilly.

Needless to say, that didn’t stop anyone from swimming for long. 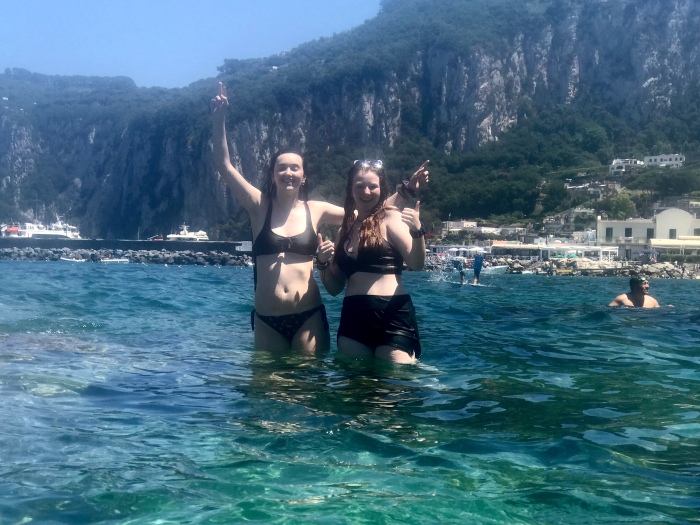 There was even a baby pool.

Which Kyle found easier to use than the restrooms on Capri.

We had to catch the 4:05 boat back to Sorrento, so everyone wrapped up the swimming by 3:30.

All of that sun and swimming was exhausting. 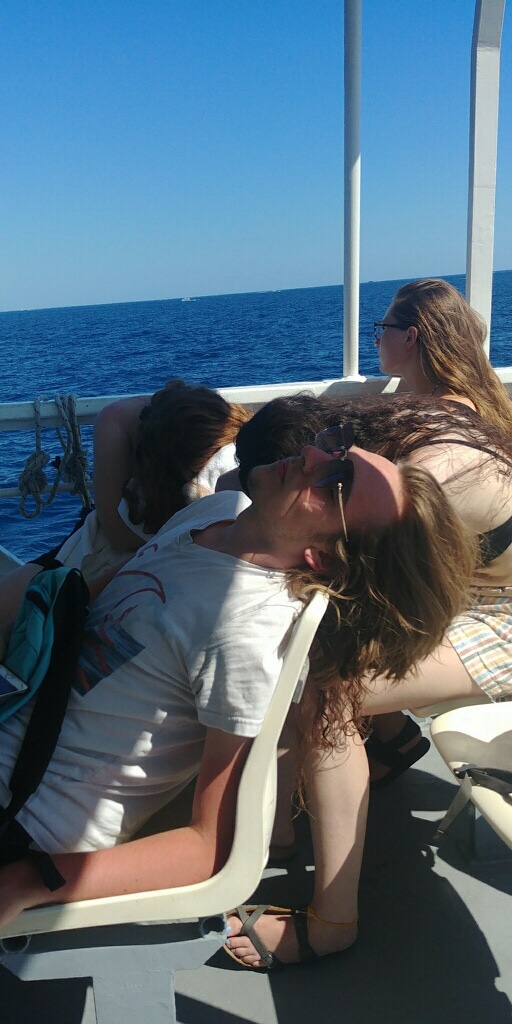 Fortunately, the rest on the boat back to Sorrento reenergized our travelers for their lesson on how to dance the Tarantella, which was created in the Sorrento area. The lesson started off with a demonstration by two local dancers.

Next, they taught our travelers the dance bit by bit.

Then it was time for the magic to happen. The Tarantella was developed as a male-female courtship dance, but our travelers refused to be defined by binary roles. 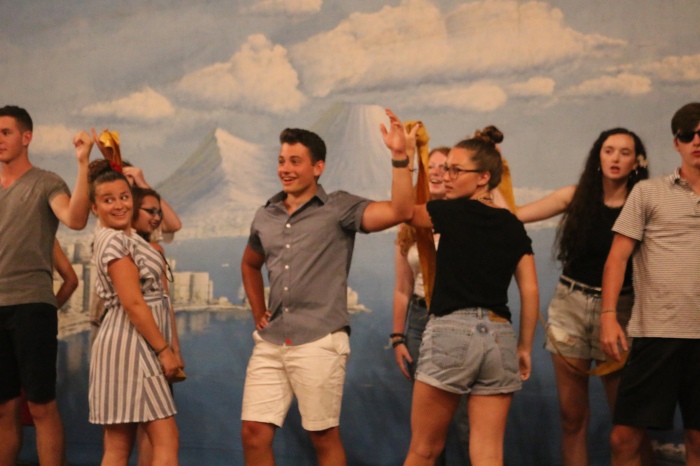 Finally, they put the whole dance together. 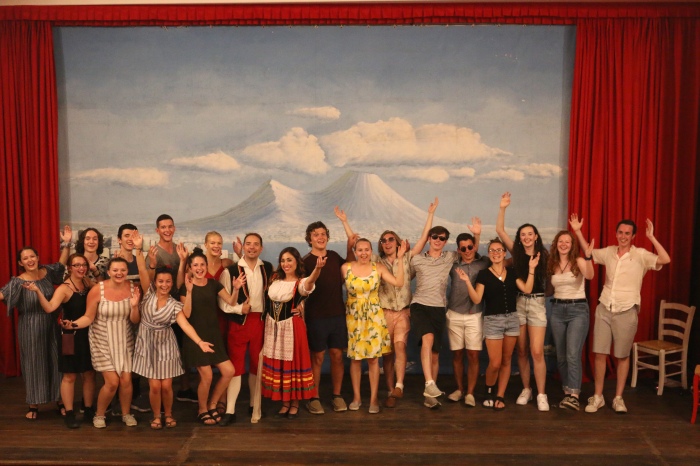 Goodbye to Sorrento and Capri – next up: Pompeii and Rome!

One thought on “Living the Life on the Italian Coast”