In Virginia, the end of summer is signaled by an abrupt 30 degree drop in daytime temperatures over a 24 hour period. That seasonal change used to be predictably in mid-October, but global climate change has pushed it later and later. While this is obviously bad for the planet, it meant that our semi-annual excursion to the mountains to see the peak fall foliage would be conveniently over our four-day Election Day weekend.

And really,  it’s all about what’s convenient for us. Sorry, planet earth.

It turned out that the weekend was just as convenient for many other people, and these people were also eager to take advantage of the confluence of apocalyptic global warming and a long election day weekend. We entered the park through the entrance by Sperryville, which involved about a 45 minute wait. Predictably, McKenna chose the moment of peak gridlock to announce that she had to pee.

And keep in mind that McKenna was traveling with two adults whose coffee consumption caused them to make pee stops at every town on this map.

Finally, we broke through the gridlock, entered Shenandoah, and found a bathroom at the Panorama turnoff. Panorama is located at a wide open space at one of the highest parts of Shenandoah National Park, and, on this day, that meant strong enough winds that the 50 degree day felt more like 40 to 45. The chill in the air was significant, causing Laura to panic that the three shirts and vest that she had brought would be insufficient to ward off the cold. Fortunately, the trip was salvaged when our next stop at the Hazel Mountain overlook proved to be bit more sheltered from the wind.

Here you can see how happy McKenna and her cousin Tabby are to feel the warm air. Or they could be this happy because the warmth had granted them a temporary respite from Laura’s prophecies of doom by freezing wind.

The main stop of the day was the two-mile “hike” to Hawksbill Summit, one of the most popular hikes in the park. In a tactical error, we parked at the lower Hawksbill lot, only finding out later that the hike labeled on the Shenandoah as “easiest” actually began at the “upper” Hawksbill lot. The hike up the mountain from the lower lot was, shall we say, poorly received. 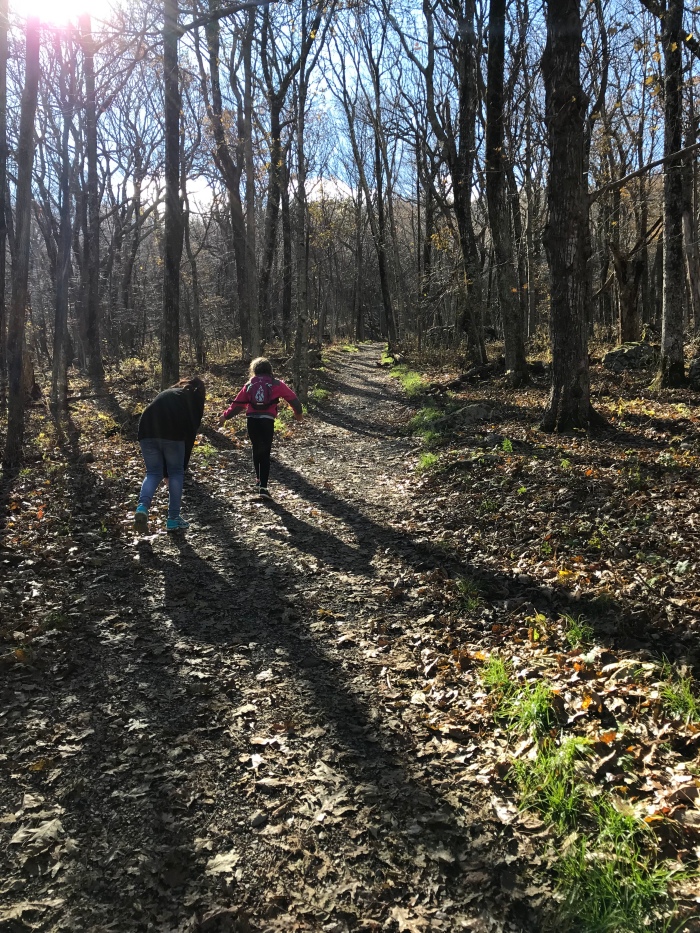 With the support of the saintly hikers coming back down the trail who helped us mislead the children into believing they were closer to the summit than they actually were, we finally did reach the top. The good news is that the views were spectacular, even if the leaves at this elevation were past peak.

The bad news was that we had found the freezing wind again. 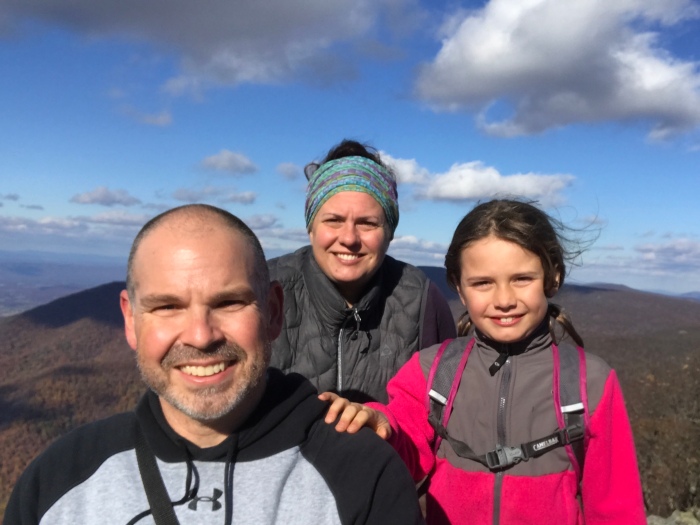 “I ONLY HAVE THREE SHIRTS AND A VEST!!!”

After enduring the icy chill for as long as could be expected given the fact that Laura’s “forty-degree coat” had been left back in Midlothian, we returned to the shelter and warmth of the woods and made our way back to the lower parking lot.

Heading south through the park, we stopped one last time at the Point Overlook, which had an impressive view from a rocky outcropping.

Not wanting the kids to miss the awesomeness of the view, Laura brought McKenna and Tabby to the rocky point.

They were super impressed. It’s like they are already teenagers.

As we made our way through the park, we made several critical discoveries. First, on the drive McKenna announced that she was drawing a “high school girl after prom night.” As teachers of high school students, Laura and I were dismayed to hear this, and we immediately began probing for more information:

Just as importantly, my research into nearby breweries identified one that not only had a kitchen where they produced the fries necessary to overcome McKenna’s dislike for breweries, they also had games with which to entertain children while adults drank beer. 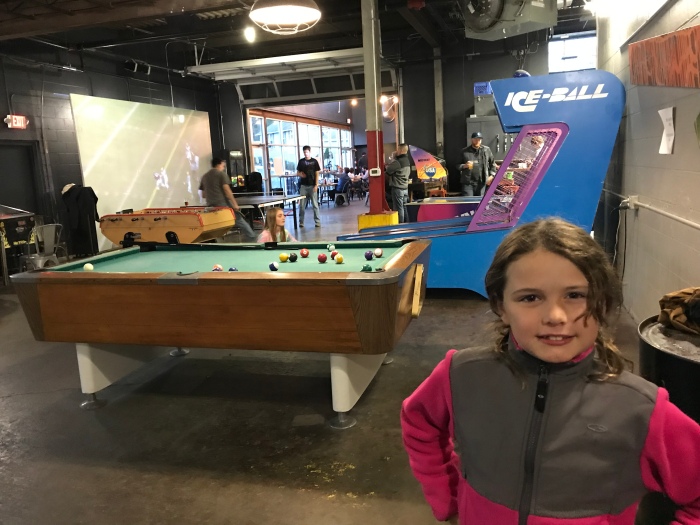 Waynesboro’s Basic City: the best brewery for parents in the Commonwealth.

We spent the night in nearby Staunton, and the next day, we planned to go to an orchard to pick apples. There are two big orchards in the region around Charlottesville. One is the Carter Mountain Orchard, a location so touristy that it’s website contains a FAQ for how to handle the large crowds. The other is the less picturesque but infinitely less crowded and misleadingly named Chiles Peach Orchard in Crozet.

Using advanced framing techniques, we ensured that the children would make the right selection.

The location with fewer people is always the right choice because, once again, we hate people.

The plan worked perfectly. When we arrived around 10am, we more or less had the orchard to ourselves. 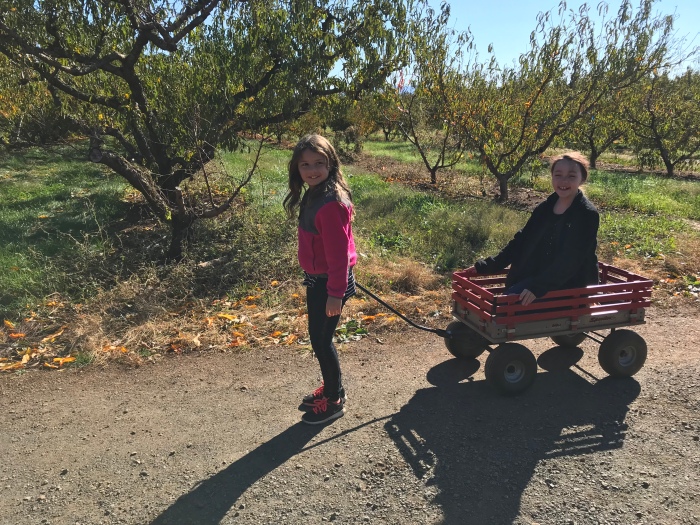 So much space! For activities!

I’m pretty sure that Carter Mountain would have converted this field into a parking lot.

The people at Chiles warned us that some of the orchard had been picked over, but they also let us in on the secret of how to find the trees that still had apples: walk more than 20 feet away from the road. 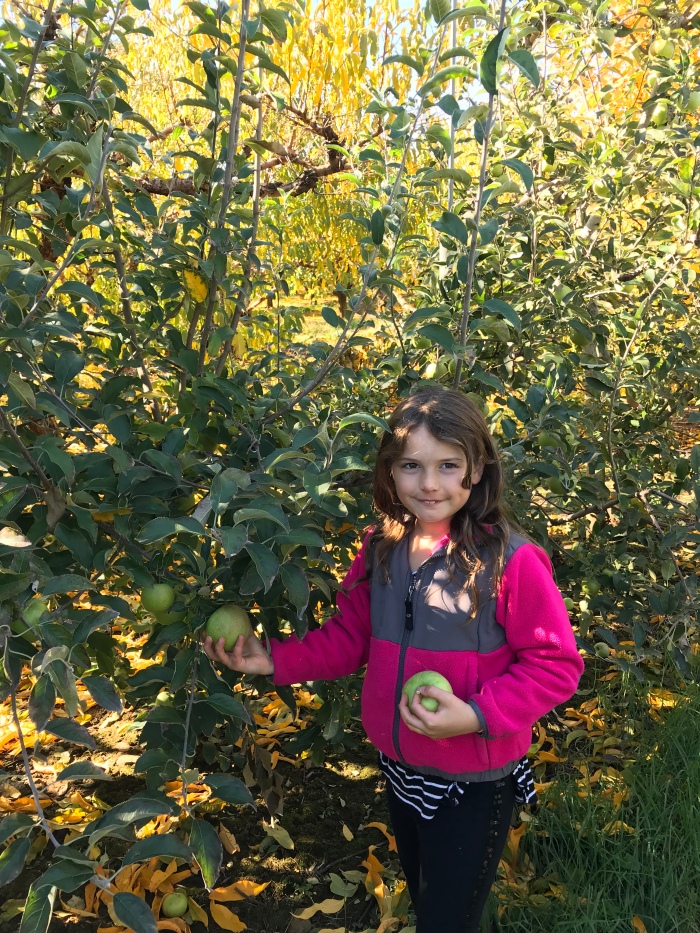 Loading up on Fuji and Granny Smith apples, we then employed more framing techniques to convince the children that hauling the apples down a muddy track using a wagon was fun. 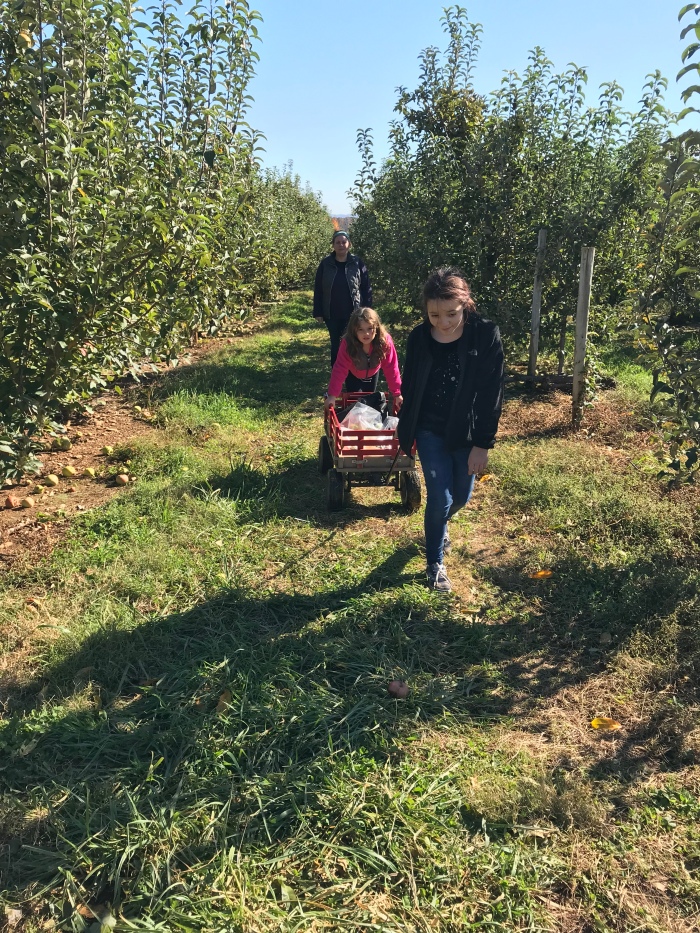 We finished up with the apple picking a little after 11am, or, as it is known to Laura on weekends, breakfast time.