Over the summer, we had gone to or through almost half of the states in the Union, but our next stop would be closer to home in Virginia – Grey’s Point. This is a campsite/resort of sorts on the Rappahannok River near the Chesapeake Bay, where my parents have a place.

In addition to the campground at Gray’s Point, the area also features “homes” made of converted RV’s. The homes at Grey’s Point, then, are “permanent trailer housing,” a phrase which tends to conjure images like the one below.

Not so much, as it turns out. The actual Grey’s Point homes are just a tad more classy.

The same goes for travel within Grey’s Point, which, as far as I could tell, did not involve the type of transportation one might expect to find at a trailer park.

Missing out on this, I’ll be honest, was a little disappointing.

In Grey’s Point bizarro version of a trailer park, golf carts are the preferred mode of transportation.

Of course they are.

We were aware of many of the qualities of Grey’s Point already, having visited the summer before, during the solar eclipse. There has never been a less stereotypical trailer park-ish scene than that of us viewing the eclipse from Dad’s boat.

We were lucky last summer when we came for the eclipse in that there were very few clouds in the sky. This year, however, there were dire weather forecasts predicting many thunderstorms; but, as had been the case with our earlier beach vacation, the storms stayed away from the most part, giving us a chance to go out on the boat to fish.

Fortunately, the fish were biting, which kept the children entertained. 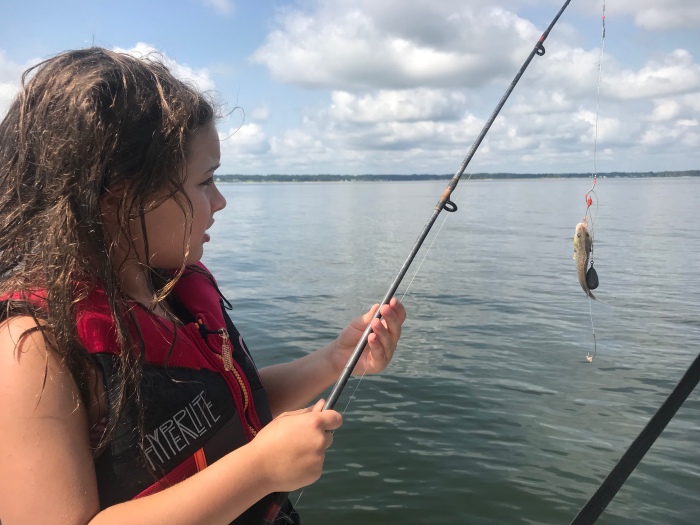 Although, for what the kids were often catching, the label “fish” may be a bit of an overstatement. 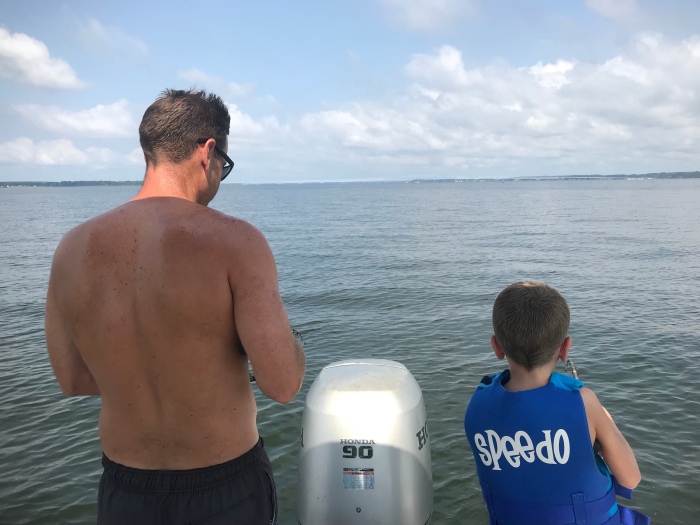 Apparently, there is only so much fishing with children that one man can take.

Since the weather remained in our favor, we returned to the shore to experience what the children believed was the highlight of Grey’s Point: the pool. 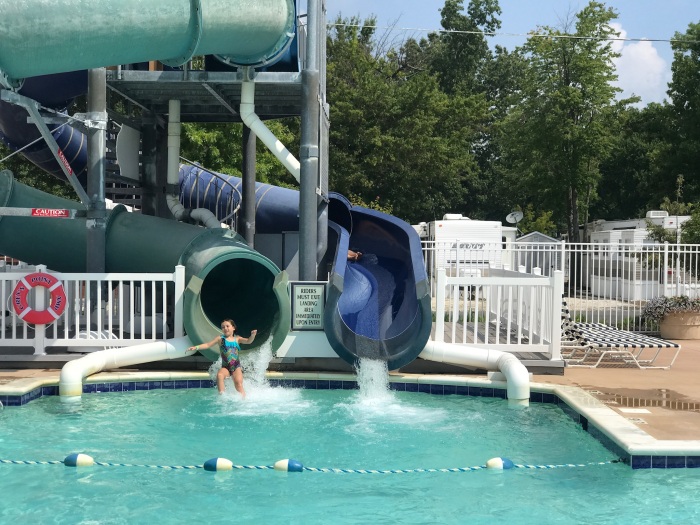 As you can see, much like at beach vacation, life at Grey’s Point follows a simple routine. In the case of Grey’s Point, this involved boating, swimming, occassionally abandoning ship, and eating. Sunday, then, was much like Saturday. On Monday we changed things up, as Mark and Jodi both had to return to the Richmond area, leaving us to handle…

It turns out that screen doors, which are a hazard even to children who have not obstructed their vision with beer boxes, become insurmountable obstacles to a child trying to use the “handle” of the beer case as a helmet visor. With the screen doors taking a beating, we chose to entrust Sir Bud-A-Lot with even greater responsibility. 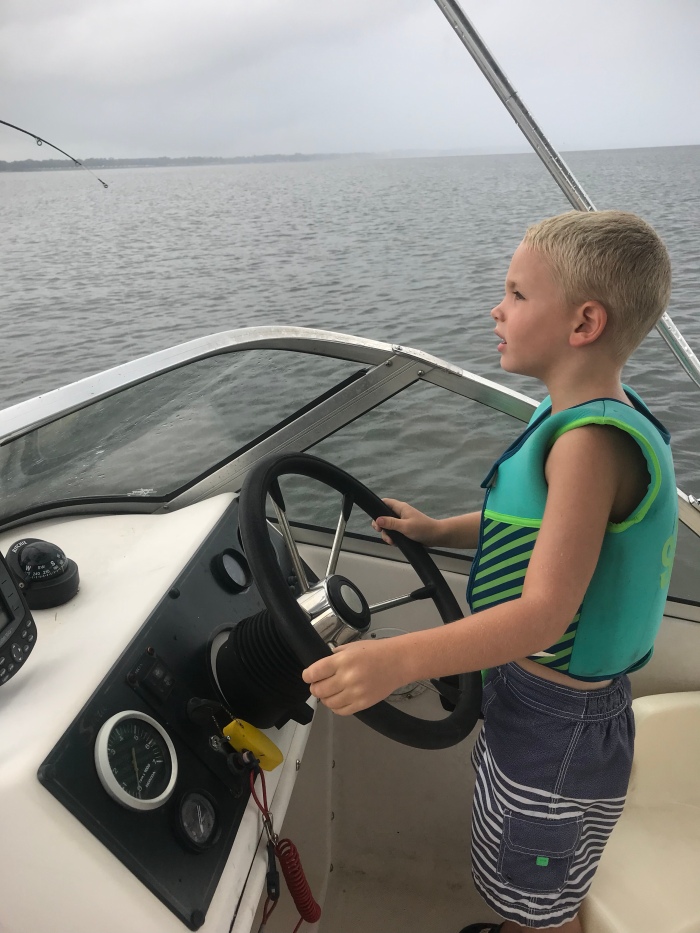 Again, there seems to be only so much of this that a person can handle before…

This time, our luck with the rain did not hold out, and the river water, which must have 80 degrees or so, was actually warmer than the cold rain.

The storm over the river was one of those odd, highly-localized storms that we see on the coast, and, as these storms sometimes do, it traveled in some kind of wierd corkscrew pattern that took the worst of it to the far shore.

In spite of everything the children did to frighten all aquatic life that might have been near the boat, we actually caught some fish, and the next step was to scale the fish, a task that inspired varying degrees of enthusiasm in the children.

‘Wait – isn’t there a way to do this without actually TOUCHING the fish? Maybe with an app or something?’ 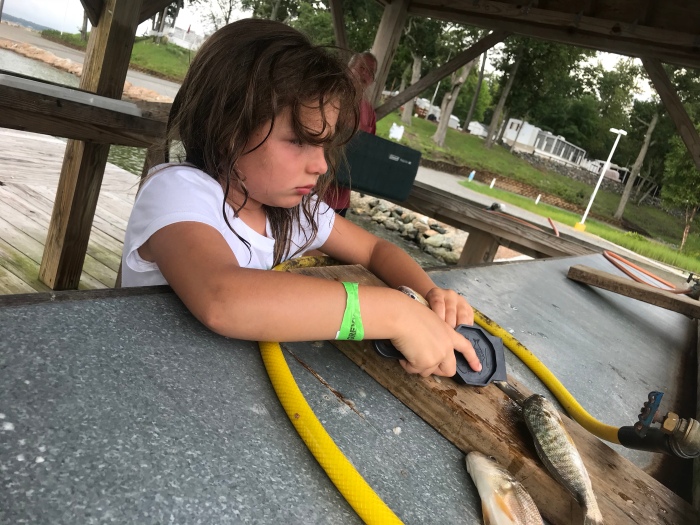 Kyle, accurately noting that the fish were slimy and that this sliminess would be transferred to his hands if he scaled the fish, opted out of this endeavor.

Kyle is applying the same common-sense approach that led him to observe, “I had fruity Cheerios. They tasted like fruit.”

Next, it was time to leave scaling and slime behind to empty the crab traps.

Emptying crab traps, which involves none of the waiting of fishing and none of the sliminess of cleaning fish, is always well received by the children. 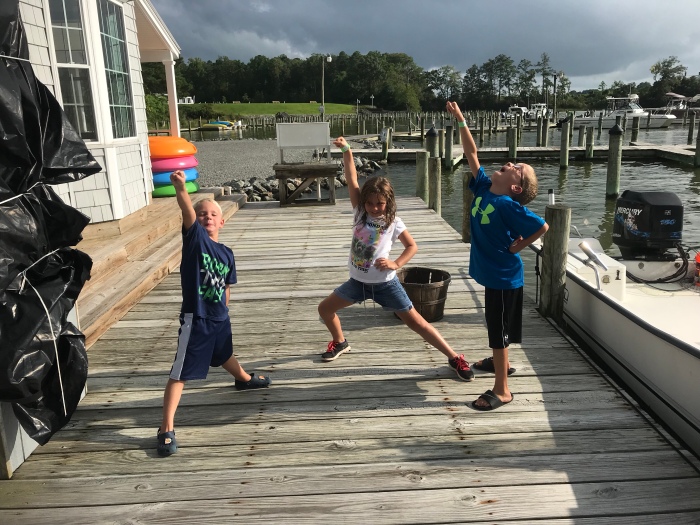 Plus, Poppy would be doing all of the hard work anyway.

And Nathan was making extra sure no hands-on help would be requested.

Clearly there was some sympathy for other creatures that had difficulty navigating screened entrances.