On July 13th, we headed north through Montana’s Tobacco Valley toward Canada. By this time, we had gone over 4,500 miles, and we were on our way to Canada’s Banff National Park in the Canadian Rockies.

After a few hours, we made it to the border, where an angry Canadian mob levied retaliatory tariffs on us while carrying placards that read, “I ❤️ NAFTA.” Ha! Actually, a bored customs agent waved us and two other families into Canada at Roosville.

Even before we reached the National Park area, the scenery in this part of Canada was amazing. 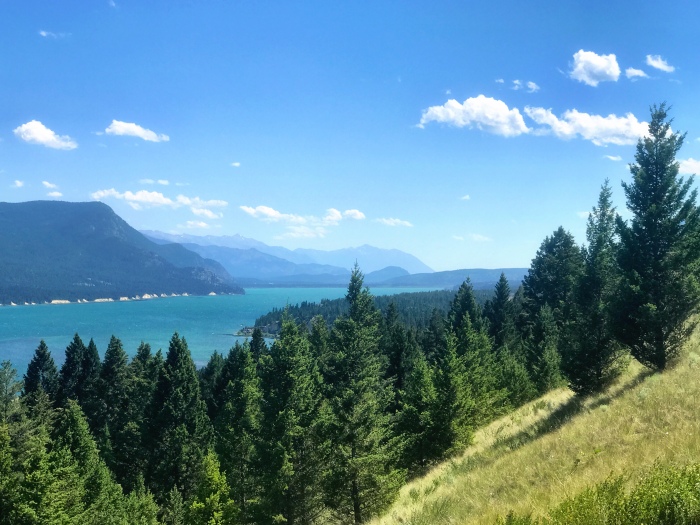 Canada’s Banff National Park is bordered by two other parks – Kootenay to the west and Jasper to the north. We approached through Kootenay Park, and the bright blue glacier water and scenic mountains were everywhere.

One of the things we noticed in Canada was that the gas pumps required prepaying, even if we used a credit card at the pump. Even worse, gas was 5-6 dollars a gallon. Overcoming the hurdle of trying to estimate how much expensive gasoline to get at each pump and the strain of the mental math of converting liters to gallons, we made it to Banff.

From Wyoming to areas north, we had seen animal crossing bridges on highways, and there were a number of these in Banff.

Apparently, such structures greatly reduce the number of animals killed on highways.

In Virginia, we prefer to trust natural selection to eventually reduce wildlife deaths on highways. Eventually.

Sunset in Banff wasn’t until 9:52, and even after 10:30, there was a bit of light. By 11:00, not only was it growing dark but it was also becoming cloudy. This was the night our weather luck finally broke, which was probably a result of the bad karma we had earned coming from a state that did not shepherd animals across grassy land bridges. The forecast said that there was a 35% chance of overnight rain, which translated to a 100% chance of continuous thunderstorms. On the plus side, the tent was mostly waterproof.

All of the night’s storms had passed through, leaving spectacular views of the mountains.

The gondola reached the top of Sulfur Mountain and we hopped off to see more amazing mountain views from the summit.

A few years ago, we had visited Mount Pilatus in Switzerland and emerged from the rail car into a cloud. We were able to see from the summit this time and avoid walking through droplets of rain, which was definitely preferable after spending the night in a damp tent, so we took the short path to the very top of the mountain.

The path was fraught with danger, and there were several close calls.

But we fought through and made it to the top.

Once we got back to the base of the summit trail, we went to the top level of the gondola terminal.

Then we went back to the bottom of the mountain for phase two of the day.

We drove north to see Morraine Lake, in the Lake Louise region of the park, and we were not the only ones to have this idea. Parking in the lake area was totally full, so we had to take this classy shuttle from the overflow lot.

After a half-hour ride, we arrived at Morraine and started the rock pile hike that oversees the lake.

When we reached the top, the views were absolutely stunning.

The bright blue is mesmerizing, even more compelling in person than in pictures. We could have stood there staring at the water for hours. McKenna, as is her way, engaged in a photo shoot on the overlook.

And she wasn’t the only one.

Returning to the base of the rock pile, we followed the trail around the edge of Morraine Lake for more views of the crystal blue water.

Then we took the shuttle back to the overflow lot and headed to our next adventure: Johnston Canyon.

The “trail” was easy to follow, as most of it was on walkways attached to the canyon walls.

These trails did provide amazing views of the canyon. 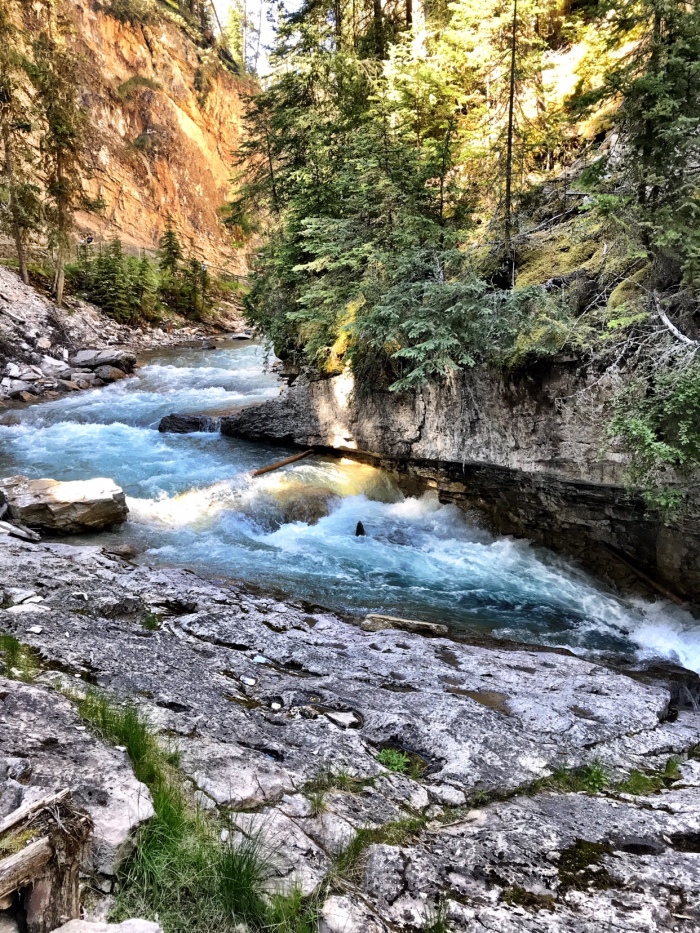 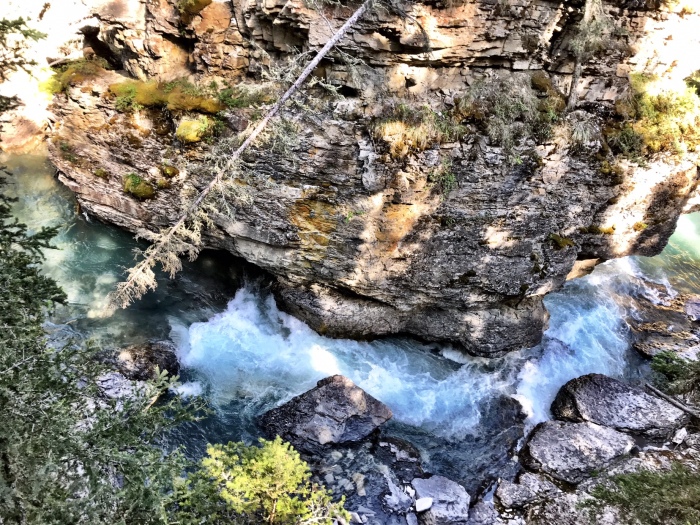 But the ease of the trail also made the hike insanely popular.

We fought through the herd to get a view of the waterfall.

There was a further hike to the upper falls, but we had had enough of the crowds, heading instead to the touristy Town of Banff.

The next night was frigid, dropping to 37. By around 8, it was warm enough for us to emerge from our sleeping bag cocoons and pack to leave the Canadian Rockies.