Following our canoeing at Signal Peak in Grand Teton National Park, we drove north to Yellowstone, where Laura had lived for three years, working as a waitress at the Lake Hotel Restaurant, which was one of the places we would be visiting during our stay there. According to Laura, July is always an incredibly busy time in the park, and we would be in the park for the last weekend of the week of Fourth of July, so it was extra crazy. There was even a line to take pictures with the park sign.

Our first stop once we entered the park was at Moose Falls, which is on the way north to Lake Yellowstone. At one time, Laura can remember being able to go in the Falls.

Before the dark times… Before the flesh-eating bacteria.

To McKenna’s disappointment, the time where people could go into the falls was gone, as too many people had brought too many diseases to the area. 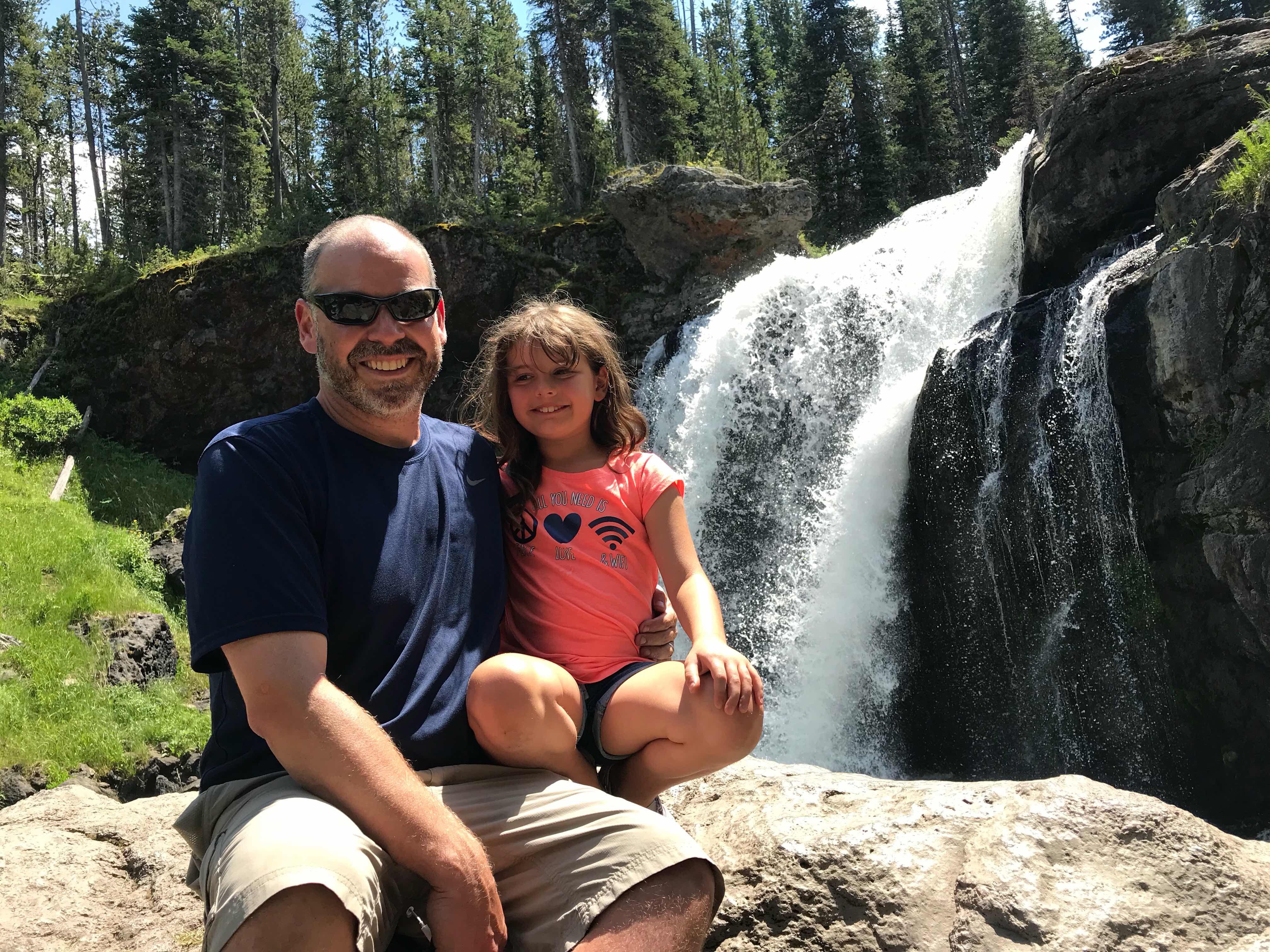 And that’s why we hate people.

So far, we have been really lucky with the weather. Aside from a brief storm in the Tetons, it had not rained at all. 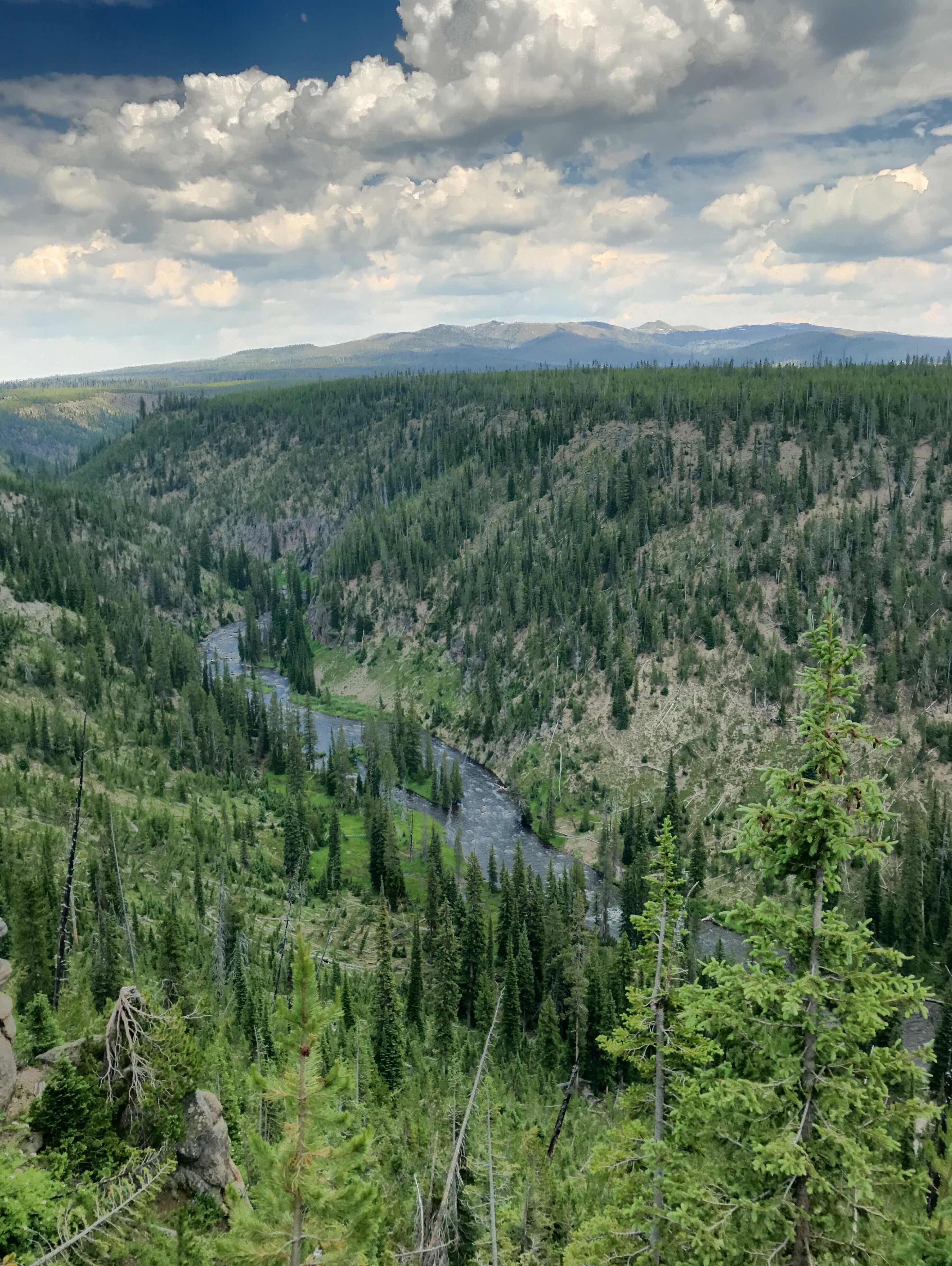 Which was great for seeing the sights of the park, not so great for washing the bugs off of our car.

On our way to the Lake area of Yellowstone, we stopped at the West Thumb Geyser Basin.

There McKenna saw her first elk. 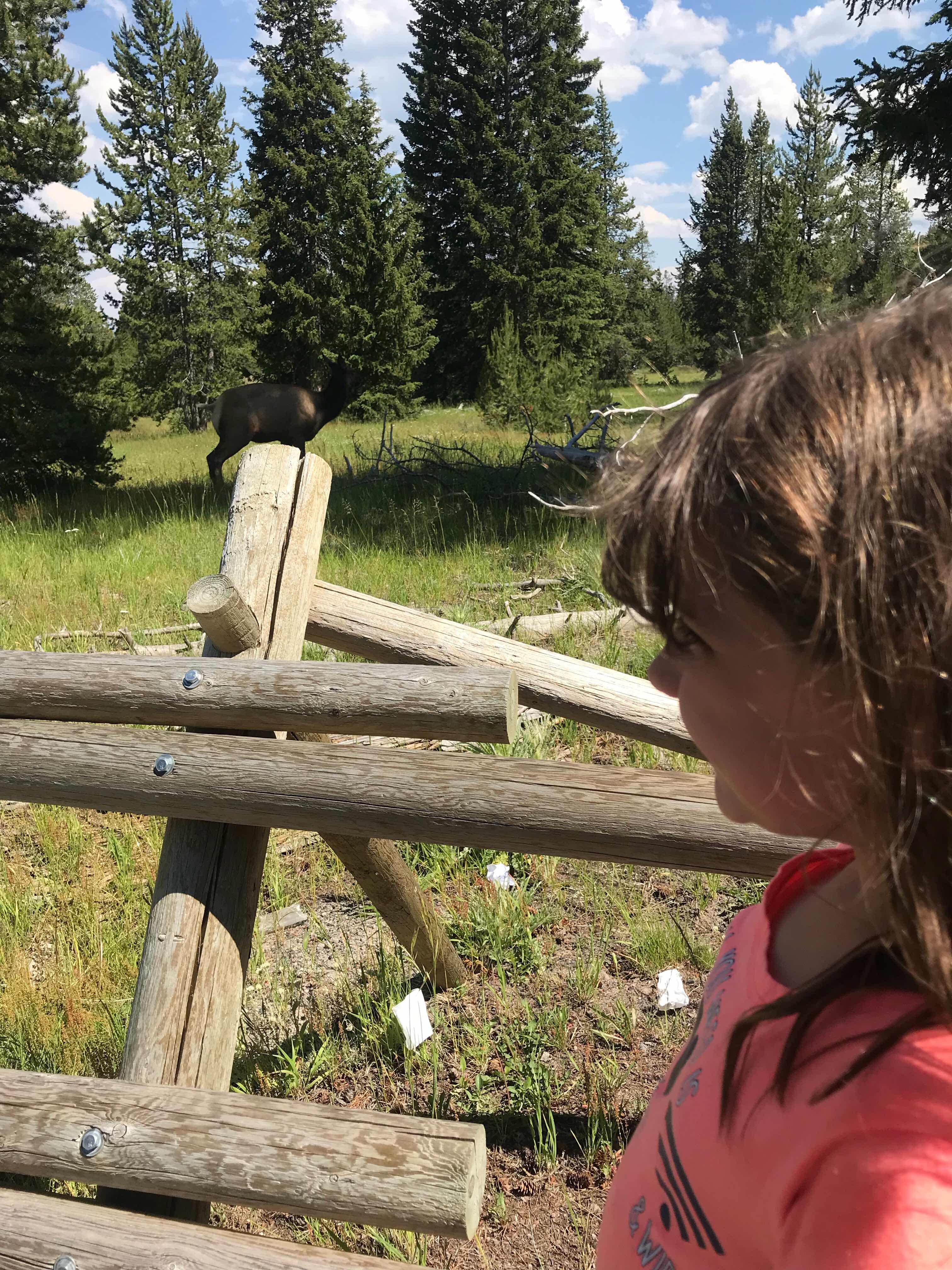 An elk which made the occasion memorable by urinating for five straight minutes.

The spectacular colors of the springs were much more to McKenna’s liking than natural features as boring as “mountains” and “waterfalls” in the Tetons.

As we moved along from West Thumb, it didn’t take long before we experienced our first elk jam, caused by this guy.

In Yellowstone, when one person sees wildlife on the side of the road, a chain reaction is set in motion, resulting in road blockages. People then deploy from their cars with the speed of special mission squads.

After we cleared the elk jam, we checked into our cabin at Lake Lodge, showered off the grime from the Tetons, and started walking over to Lake Hotel. The wildlife of Yellowstone had other ideas about our plans, as this bison meandered directly into our path.

Mr. Bison, you won’t like Laura when she’s hangry.

Circumventing the bison that had violated the Yellowstone rangers’ 25 yard rule, we made it to the Lake Hotel for our dinner reservations. Laura had brought a bottle of wine from her Uncle David’s vineyard, which we had with dinner.

After dinner, we attempted to walk along Lake Yellowstone, but the mosquitos were absolutely insane. 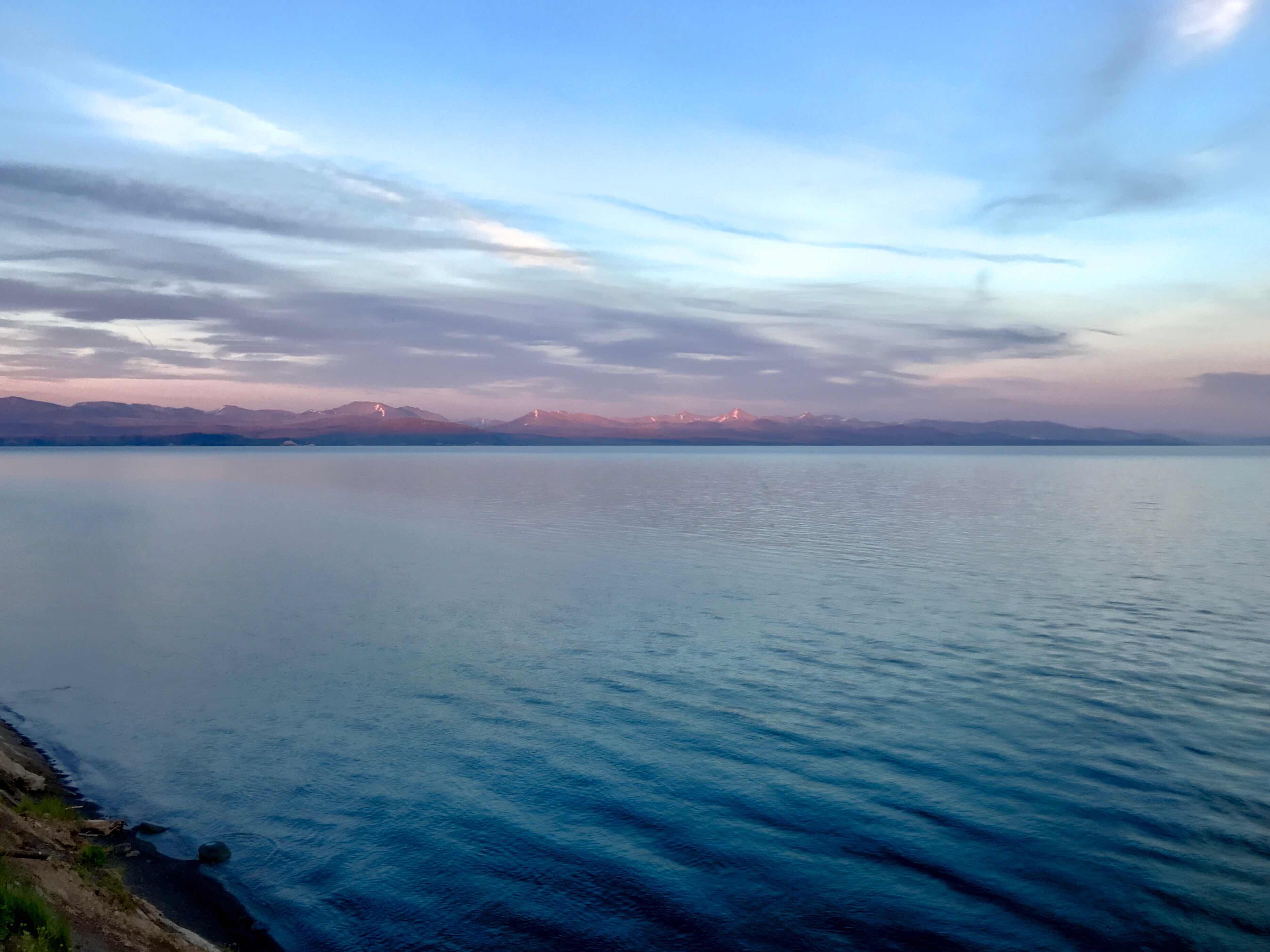 I was almost desiccated trying to take this picture.

The next morning, we once again had to get an early start in order to grab a campsite at the Tower Falls Campground, which was a first-come first-served campground in the northern part of the park. On this kind of trip, it’s easy to lose track of the days, and we had forgotten that this was last Saturday of Fourth of July Week. There were many sites open as people were ending their vacations and heading home, so we could have waited an hour or so longer to get a site. We grabbed an empty spot, ate breakfast at nearby Roosevelt Lodge, and headed to the Grand Canyon of Yellowstone.

That took us into the center of the park, which was infested with tourists. Of the National Parks I have visited, Yellowstone is the most crowded. This fact, combined with the fact that the concessioners of the park have done a great job of catering to those tourists, gives the park a Disney feel.

Our first stop in the Canyon area was Artist Point, on the south rim of the canyon, overlooking the lower falls. The view was spectacular.

At the waterfall, we encountered a teenaged girl whose short-shorts were way too short (another sign of the Disney vibe), prompting this exchange between Laura and McKenna:

These comments, of course, were made loudly enough for everyone on Artist Point to hear. Disengaging from cool teenagers, we drove around to the North Rim to see the waterfall.

In the middle of the day, we took a break from the sight-seeing to go to the Canyon area stores and lodge, one of the most Disney-like parts of all of Yellowstone, with a food court, education center, and various forms of entertainment for children. 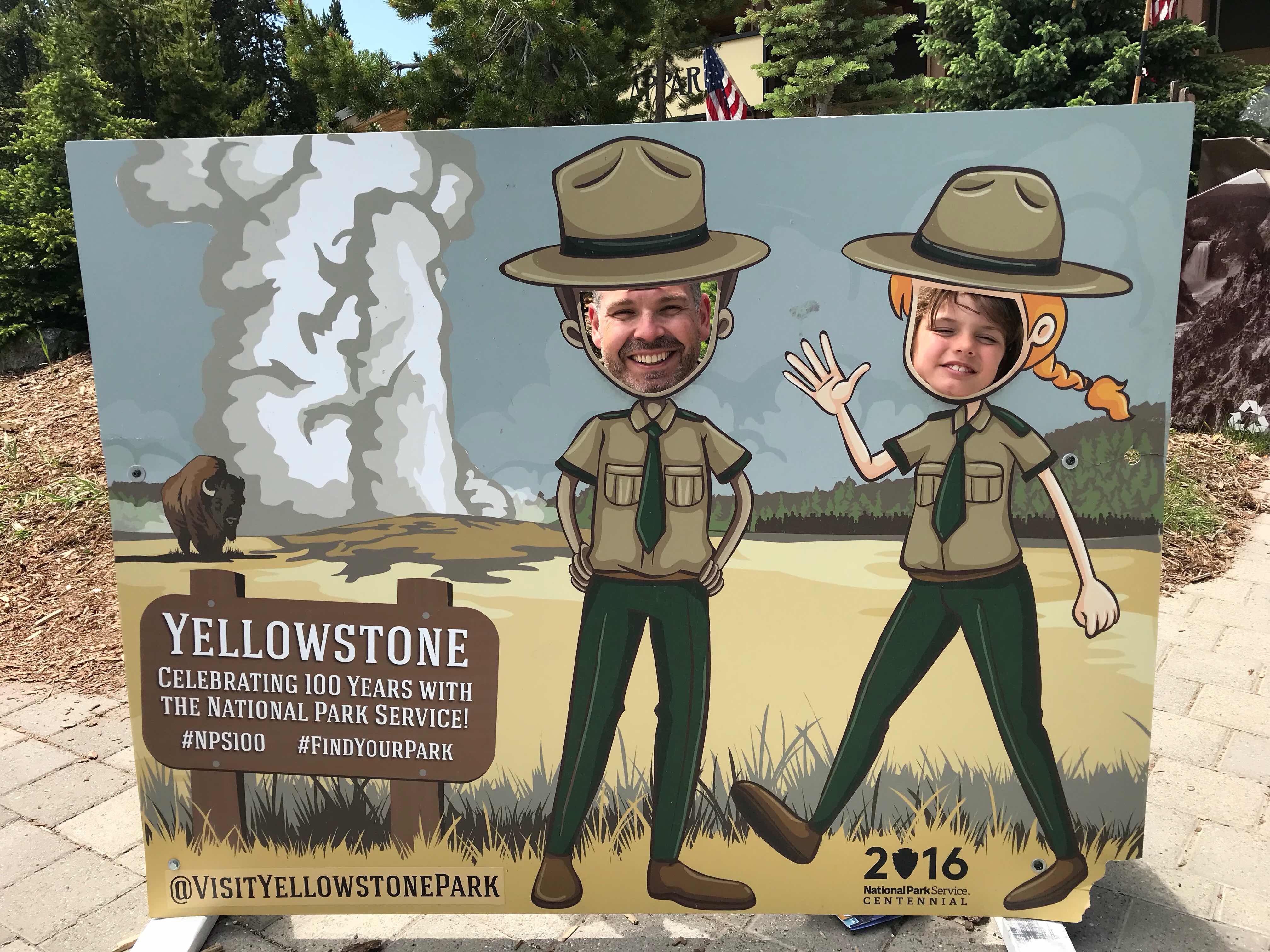 Refueled on Canyon ice cream and coffee, we drove to Lamar Valley, one of the parts of the park known for wildlife.

Turning around at the Montana edge of the park, we returned to our campground at Tower Falls. As was true of the other parks, our site had easy and convenient access to restrooms and water. McKenna rated the toilets negatively compared to the other campground due to the fact that there were “at least five flies” buzzing around, while the better toilet at Jenny Lake “only had two or three flies.”

I guess if I could start a fire with a stick and rope, I might start every class that way.

McKenna, who volunteered twice to help out during the talk, was thrilled by the experience, which included horrifying information like:

• Bears had been in our campground every night for the last six days. Maybe they rest on the seventh day?

• Bears can close 44 feet in one second, less time than it would take me to draw our bear spray but just enough time to wet myself before the bear made impact.

• Bears can smell you and your food from several miles away

On the positive side, bears avoid hikers that make noise, and I would be hiking with two of the noisiest hikers on the continent.

The next day was our final day camping in Yellowstone. McKenna could not have been more happy, since we would be staying in a lodge the next night, and she vastly prefers any kind of hotel experience to camping. In fact, she told us that her dream vacation was to stay at a 5 star hotel in Washington DC. Instead, we took her to nearby Tower Falls, which included her favorite kind of hike: a down and up.

We walked down to the river on a trail that used to go to the base of the falls. Unfortunately, that trail had been closed.

Yellowstone is massive, and the two-and-a-half days we had allotted were not nearly enough to see it all. It is so huge that it has more than one hotel, several gas stations, and a number of general stores. Still, we gave the park our best effort, and on the second day explored the Upper and Midway Geyser Basins. Just to travel from our campsite at Tower Falls to Old Faithful took about an hour. 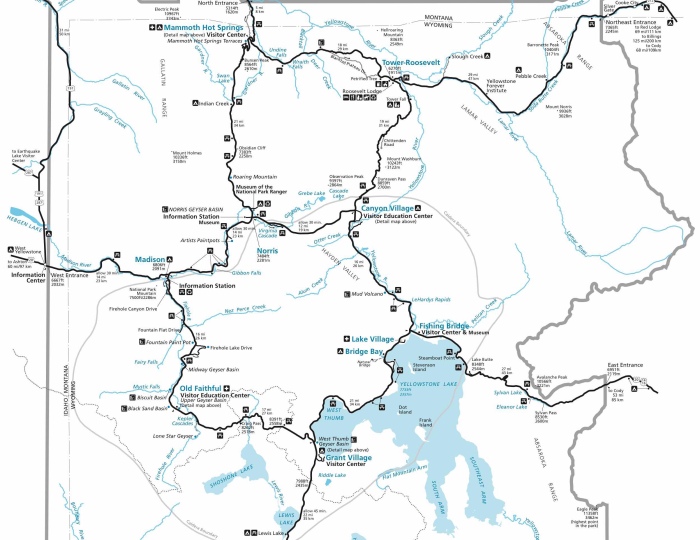 We had saved the most touristy section of the park for this day: Old Faithful. Sadly, according to a ranger, there are people who visit the park only to see Old Faithful, which is probably a sign of the decline of Western Civilization. Our tour of the region started with a visit to the Old Faithful Inn.

We fought through the mob to see the inside of the Inn, and there we found the current predictions for the geysers. 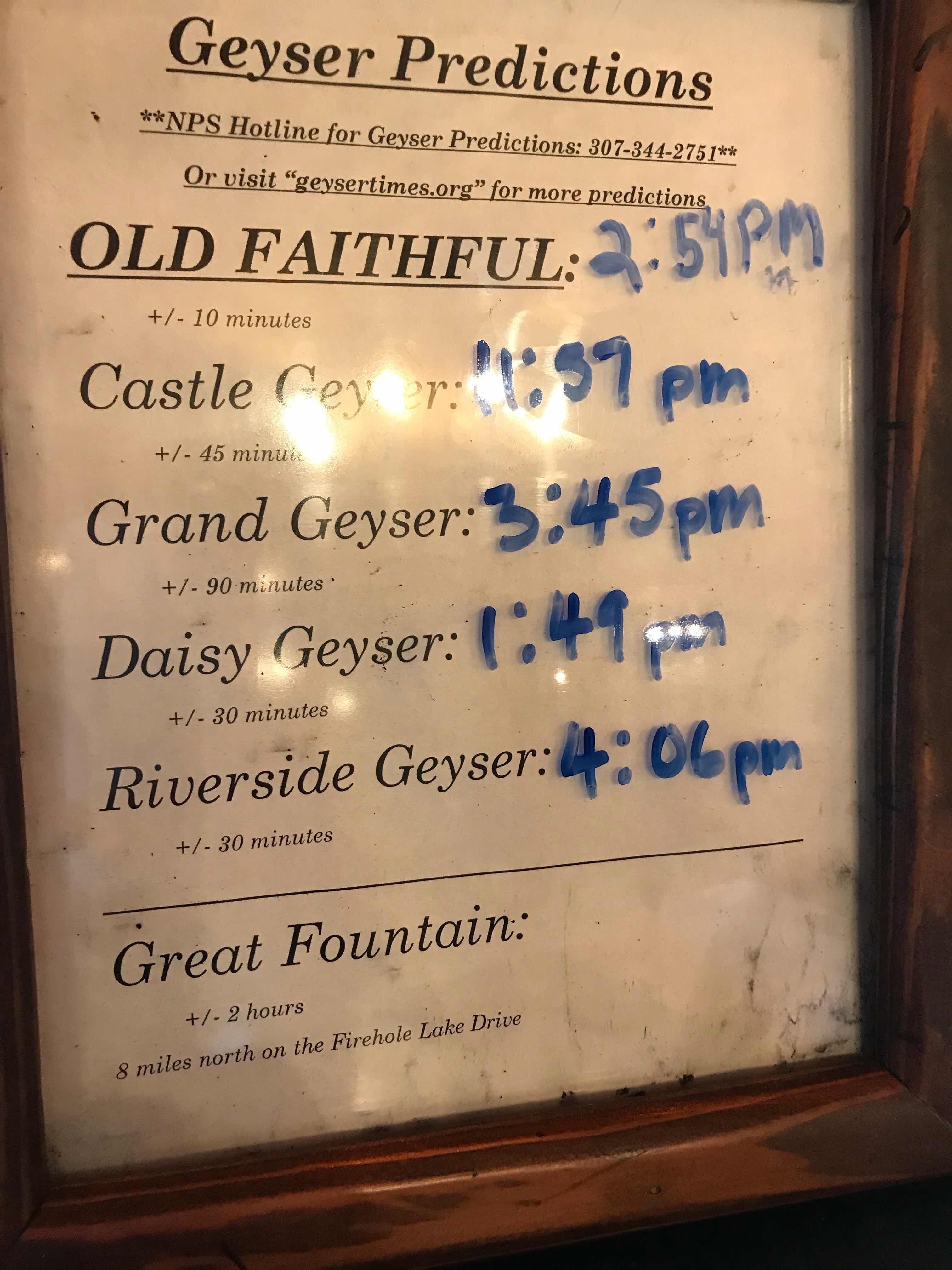 Since McKenna had actually heard of Old Faithful, she had designated that geyser a must-see. 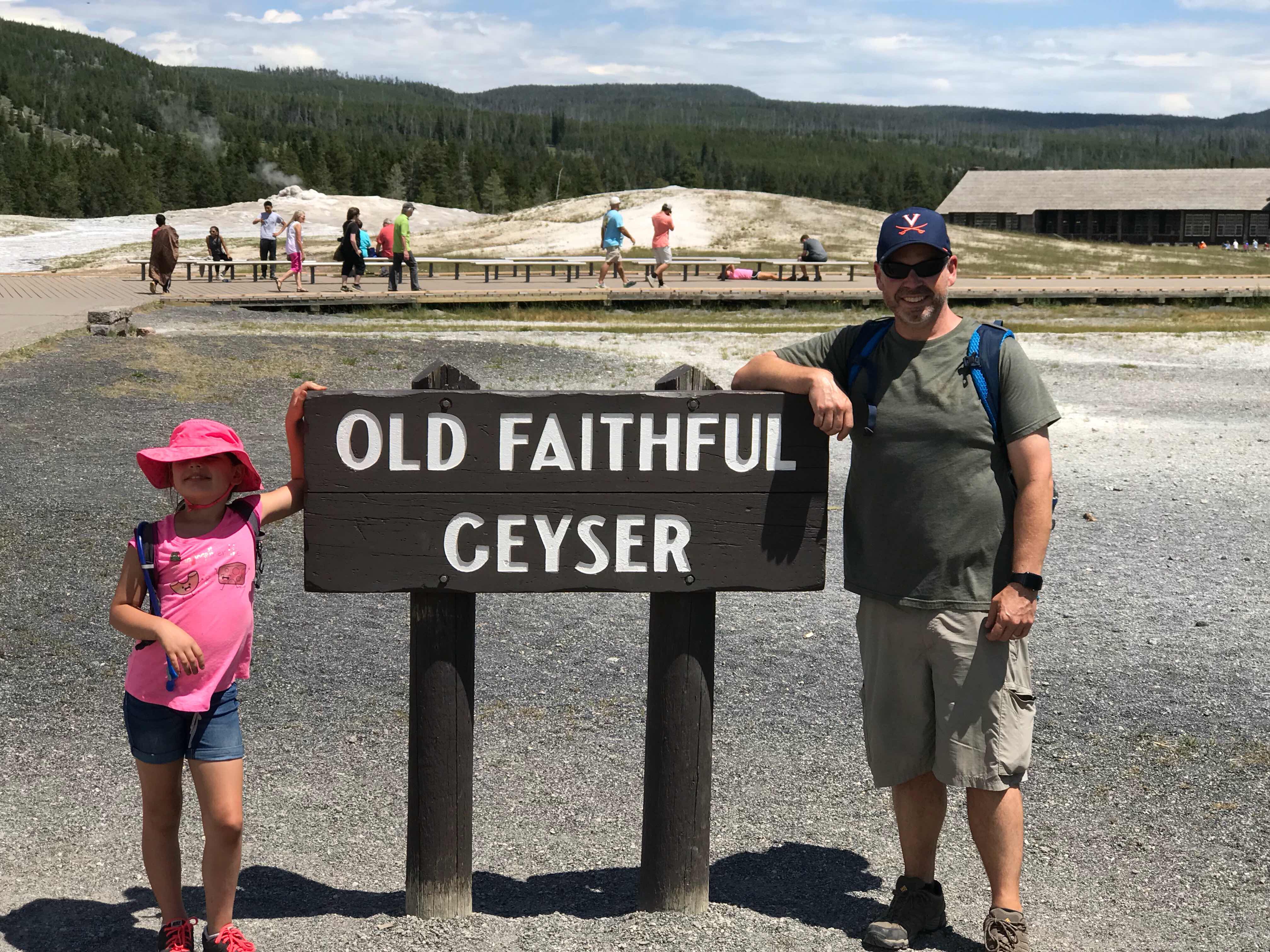 Right around the base of the geyser a crowd of a size that you would normally find at a sporting event formed, growing as the time of the geyser’s eruption neared, so we opted to view the geyser from a distance.

Because we hate people. 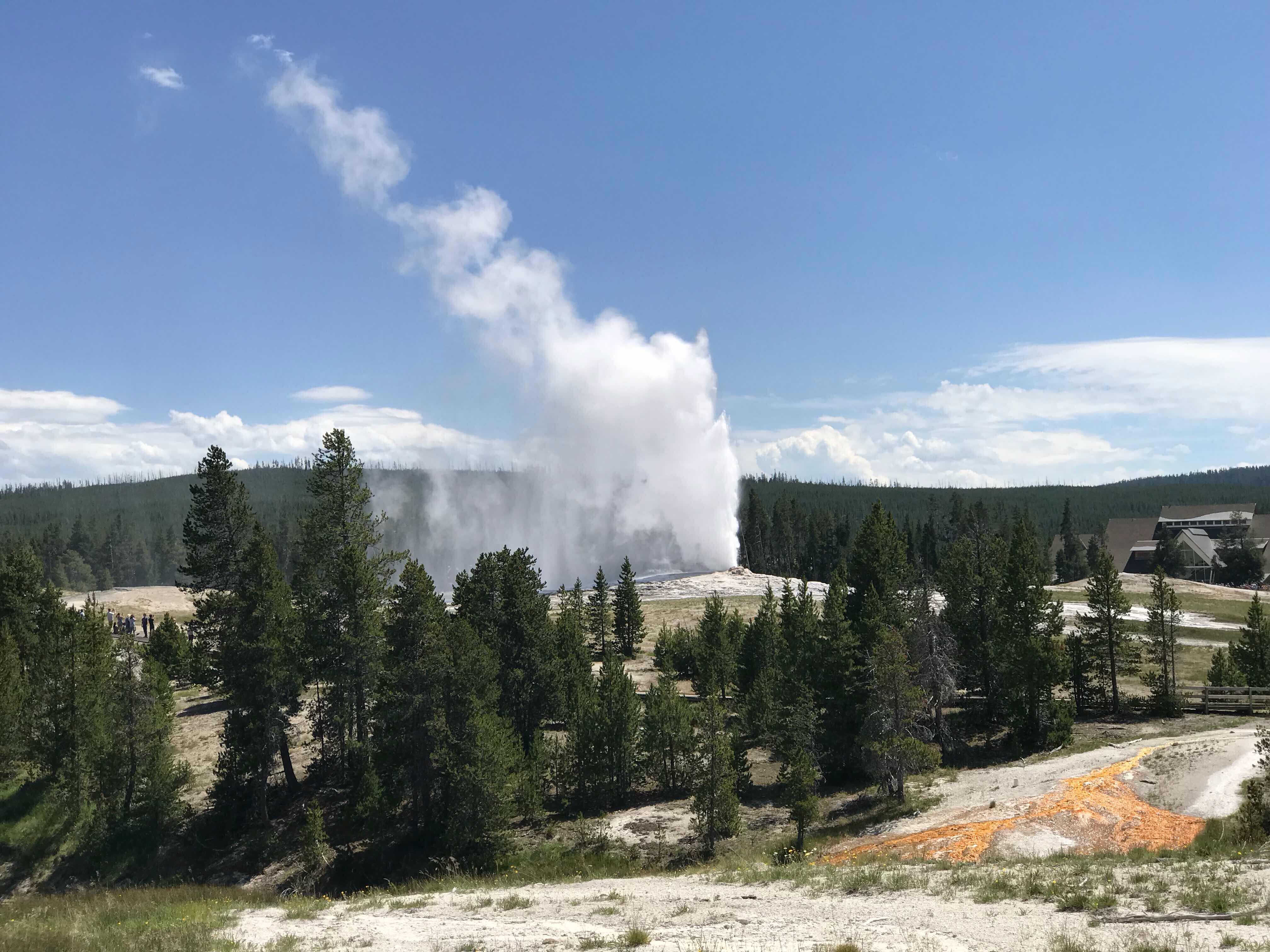 Our primary touristy obligation out of the way, we walked around the boardwalk the wound through the other geysers in the area.

We had intended to see Grand Geyser, but we couldn’t see where it was labeled on our map. We were alerted to its location by the presence of a large crowd. 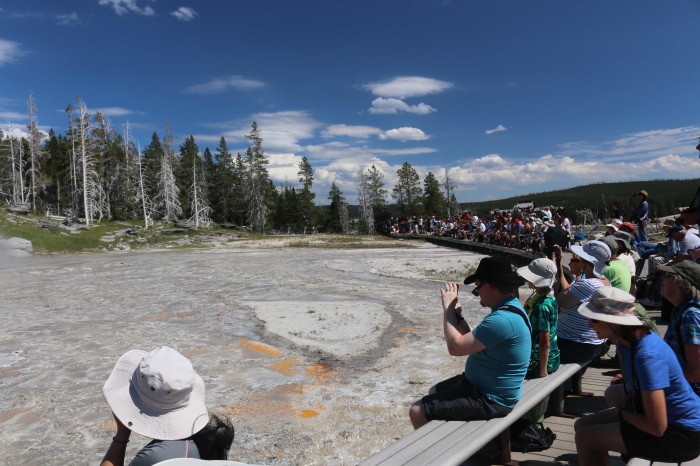 The geyser was indeed grand, grander than Old Faithful.

Although I have heard that size doesn’t matter, right? RIGHT?!

We lucked out in seeing the geyser erupt; Grand Geyser was predicated to go off at 3:45, but that estimate was +/- an hour and a half. Grand actually erupted just after 3:30, and some of the crowd were disgruntled at the luck of the late arriving geyser viewers.

One of the last springs we saw in this geyser basin was “Beauty Spring,” and McKenna wasted no time posing in front of it.

When asked by a passerby if she got her beauty from her mother, McKenna responded, “I get my beauty from my Grandma.”

We drove north to Midway Basin to see the Grand Prismatic Spring. 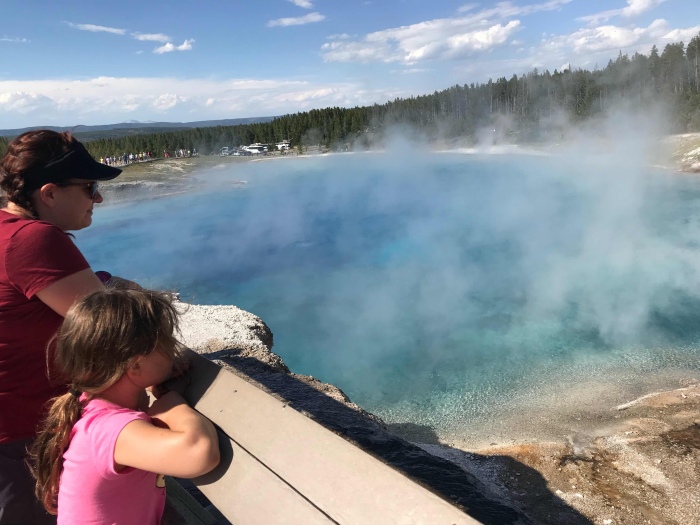 Unfortunately, we didn’t have time to hike the Ferry Falls trail, which included an overlook of Grand Prismatic, providing a view from above. The view of Prismatic and the surrounding springs from ground level was still impressive, but it didn’t give the full rainbow effect of the main spring.

Plus, the crowds around the spring were gigantic.

And we hate people.

At around 7pm, we reached our final destination of the day: Mammoth Hot Springs. Since it was late in the day, McKenna was happy to see that the boardwalks at Mammoth were less extensive than those in the Old Faithful region. 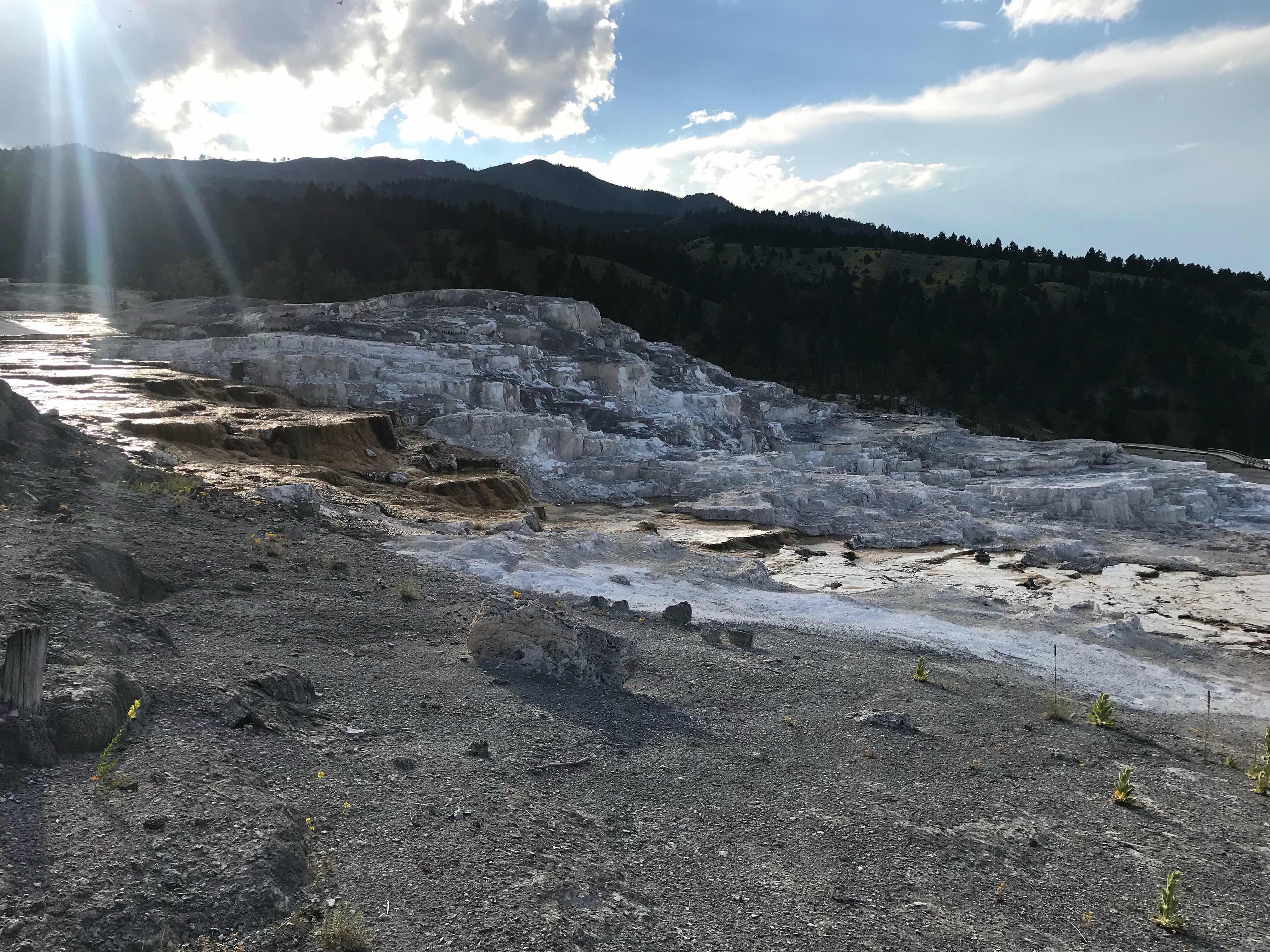 The landscape here is spectacular, looking more like another planet or the moon than something on earth. 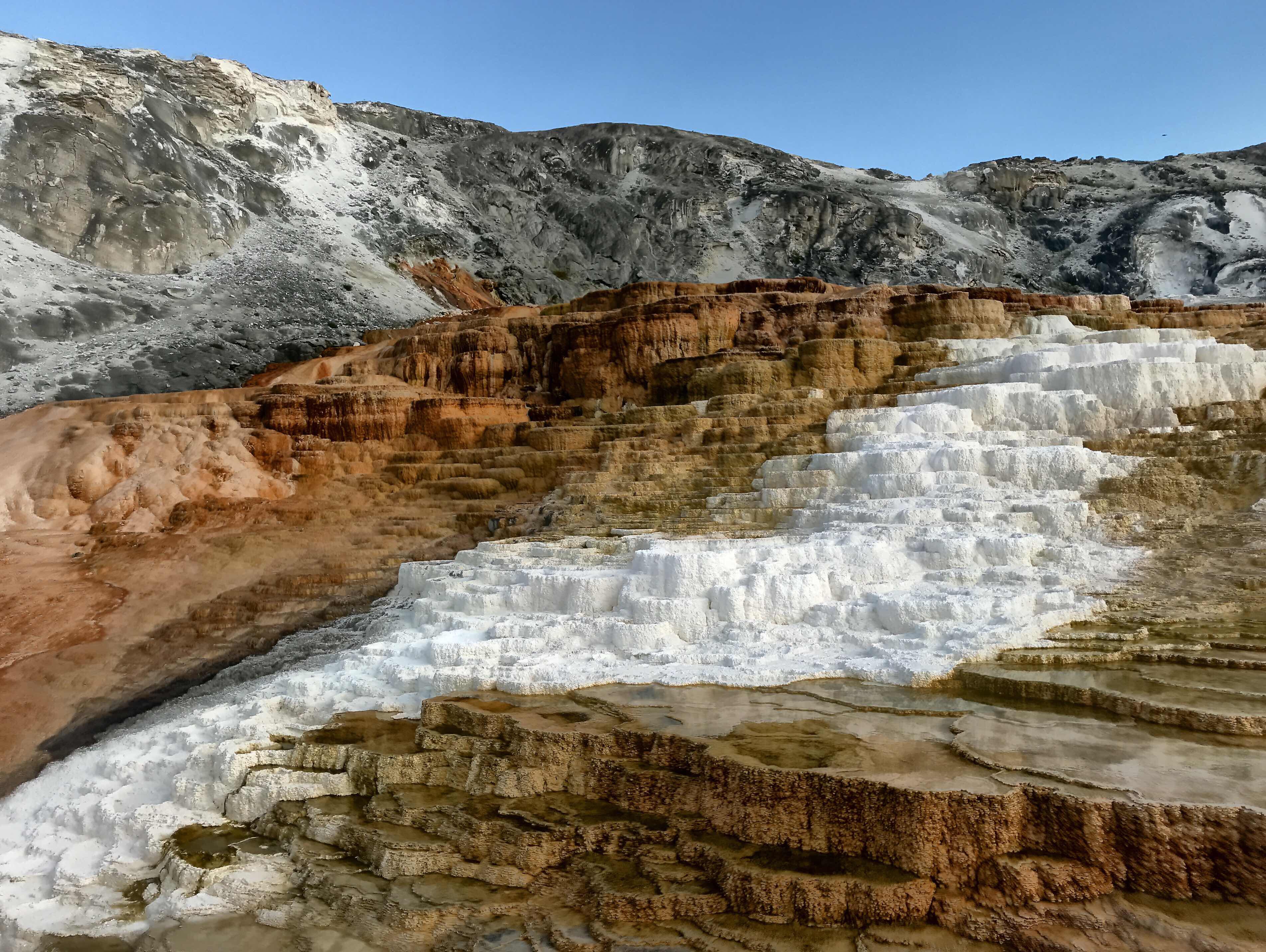 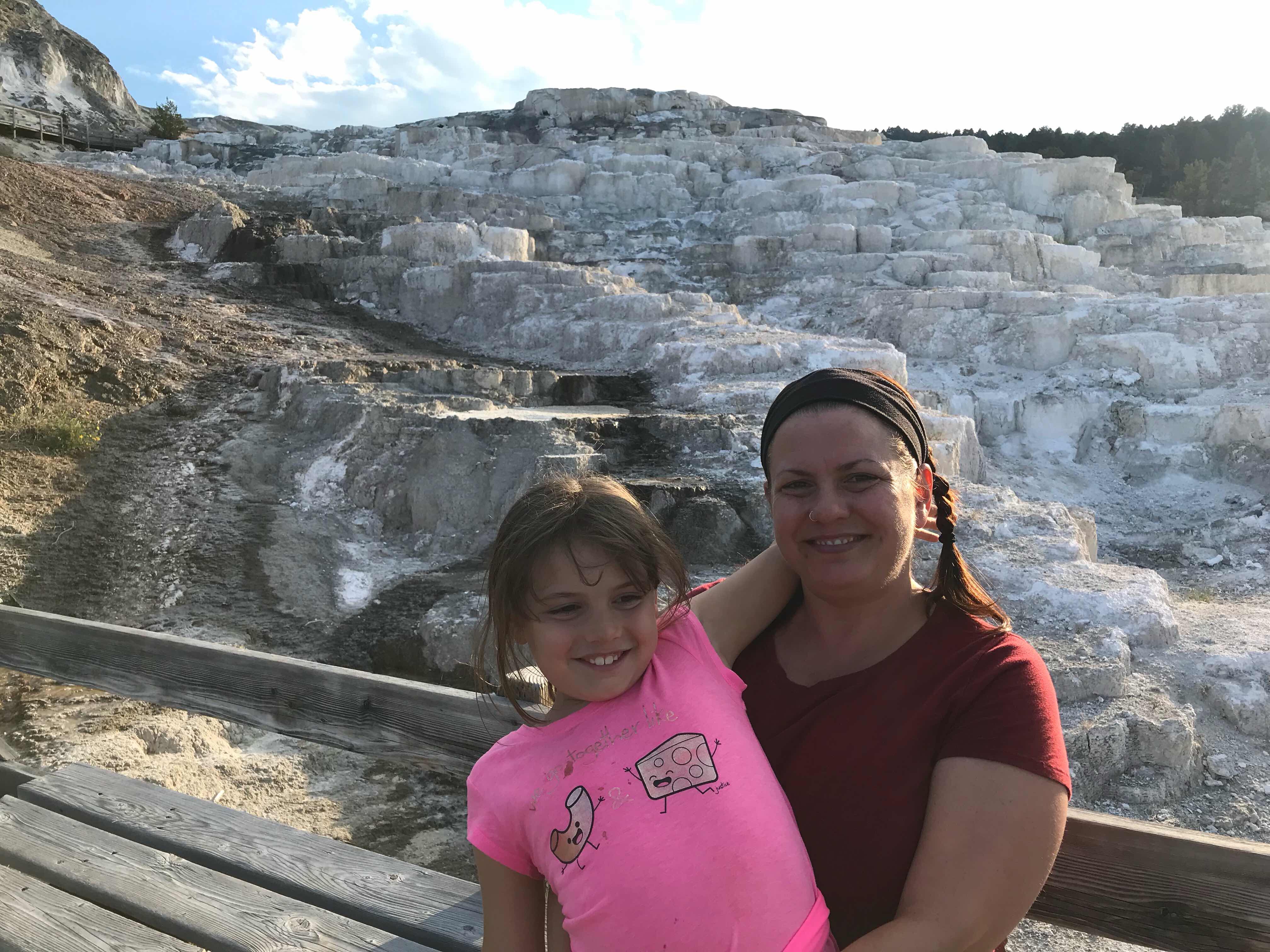 On our way back to the campground, we ran into a herd of elk.

This time, not urinating.

The next morning, we packed up to leave our campsite. Full disclosure: our camping experience is not one of deprivation and hardship. Packing our two memory foam mattress pads, air mattress, three sleeping bags, camping chairs, camping table, camping foot stool, and more was something of a challenge, but by this time we had become experts at cramming all of that into our car top carrier.

Doubling the weight of our car.

On the way out of the park, we got one last look at the wildlife of the region – a bear and its cubs. 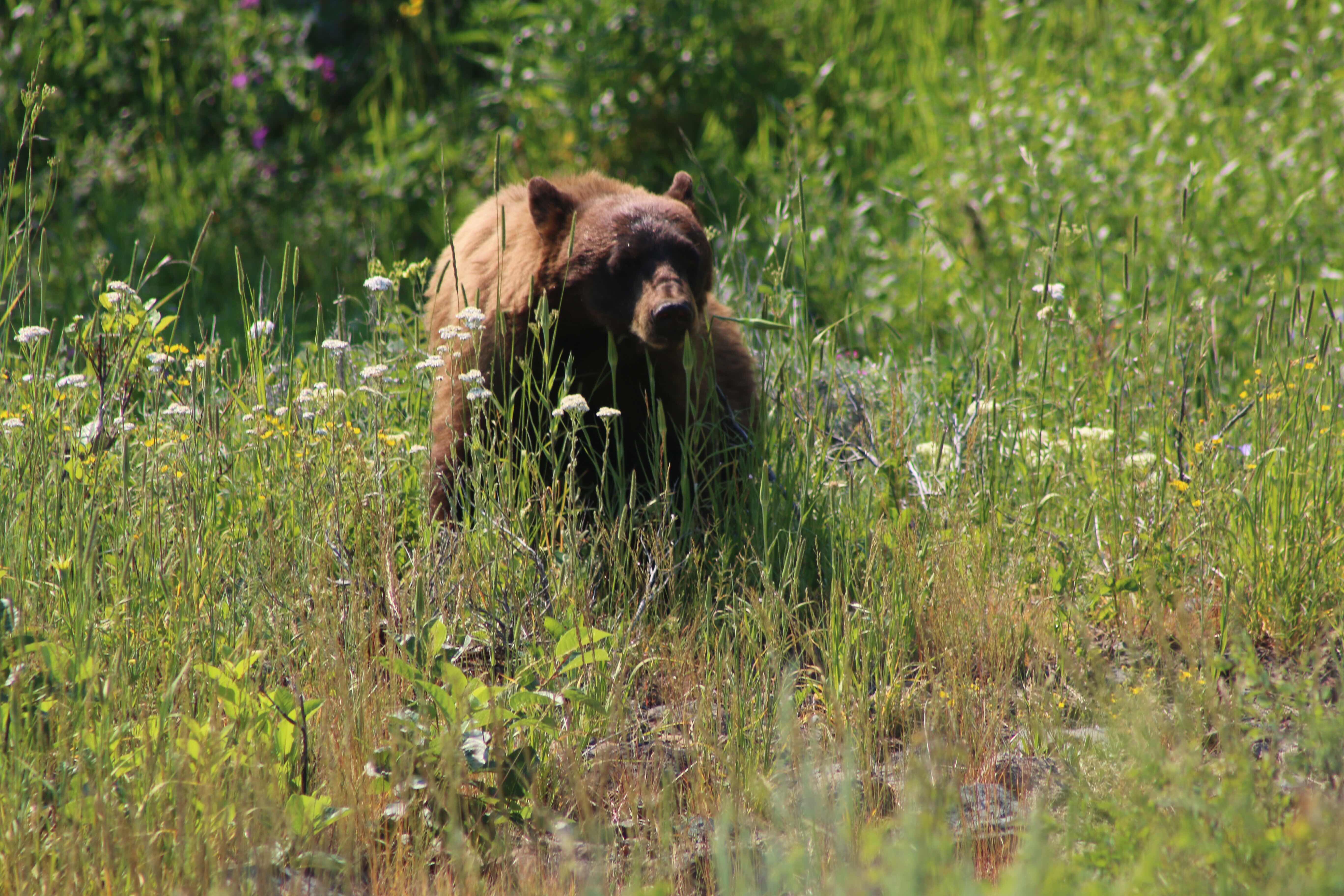 They look so cute when they aren’t in the campground.

Before we left, we turned in McKenna’s completed Junior Ranger booklet, and she was sworn in as a new Junior Ranger.

Maybe with this achievement she’ll finally have a positive self-image.