After attending consecutive wedding celebrations in the Detroit area on Friday and Saturday, on June 24th we began our ambitious camping and touring vacation. The plan was to go from the Upper Peninsula of Michigan to Banff in Canada, tent camping about 2/3 of the time.

After about five hours of driving on the 24th, we reached Macinaw City, on the northern coast of Michigan’s Lower Peninsula.

And there was much rejoicing.

We crossed the bridge to the Upper Peninsula. 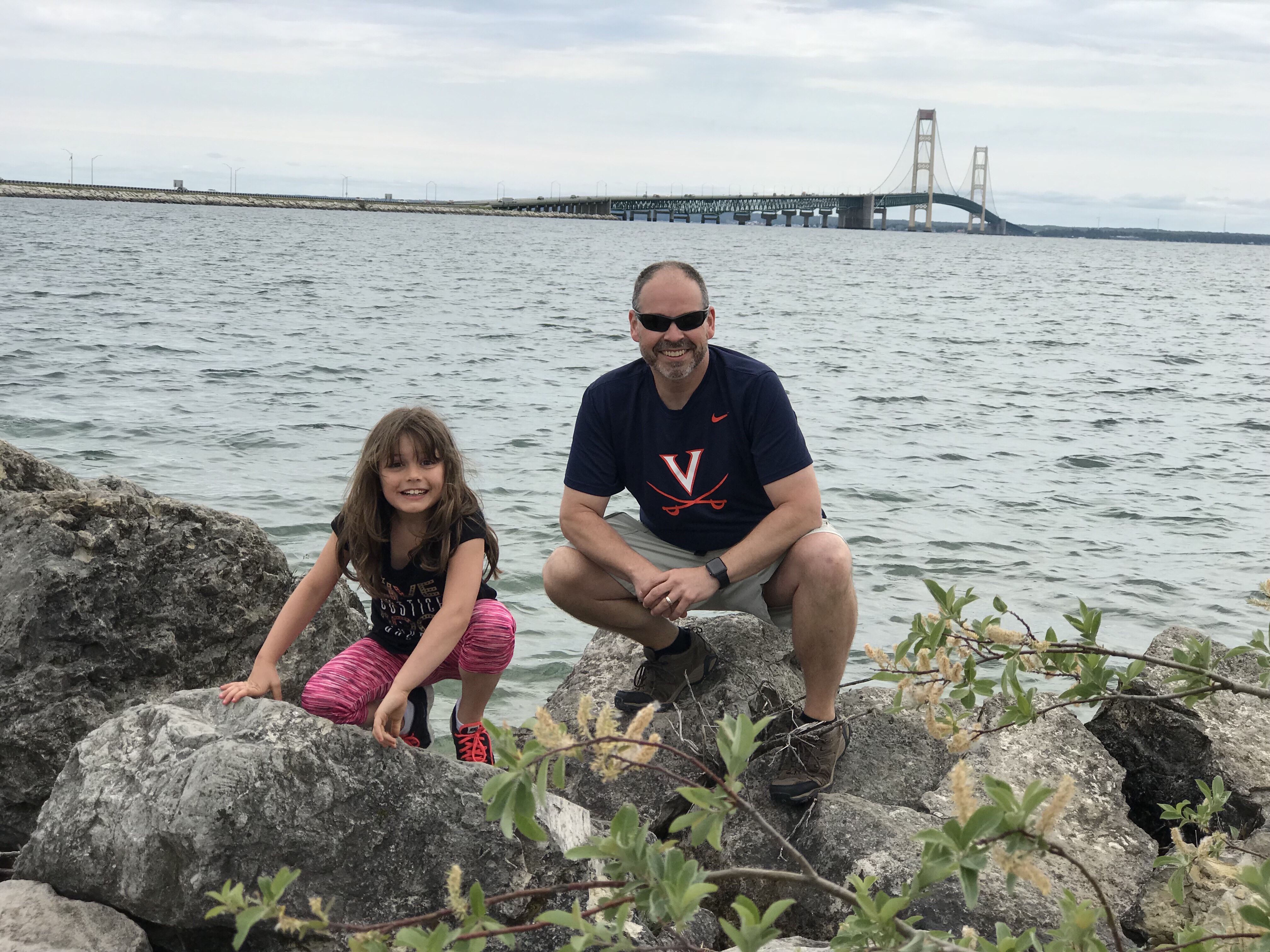 While in the Upper Peninsula, we were camping in Tahquamenon Falls State Park, in Paradise, Michigan. The drive north to the park was like traveling backward in time. 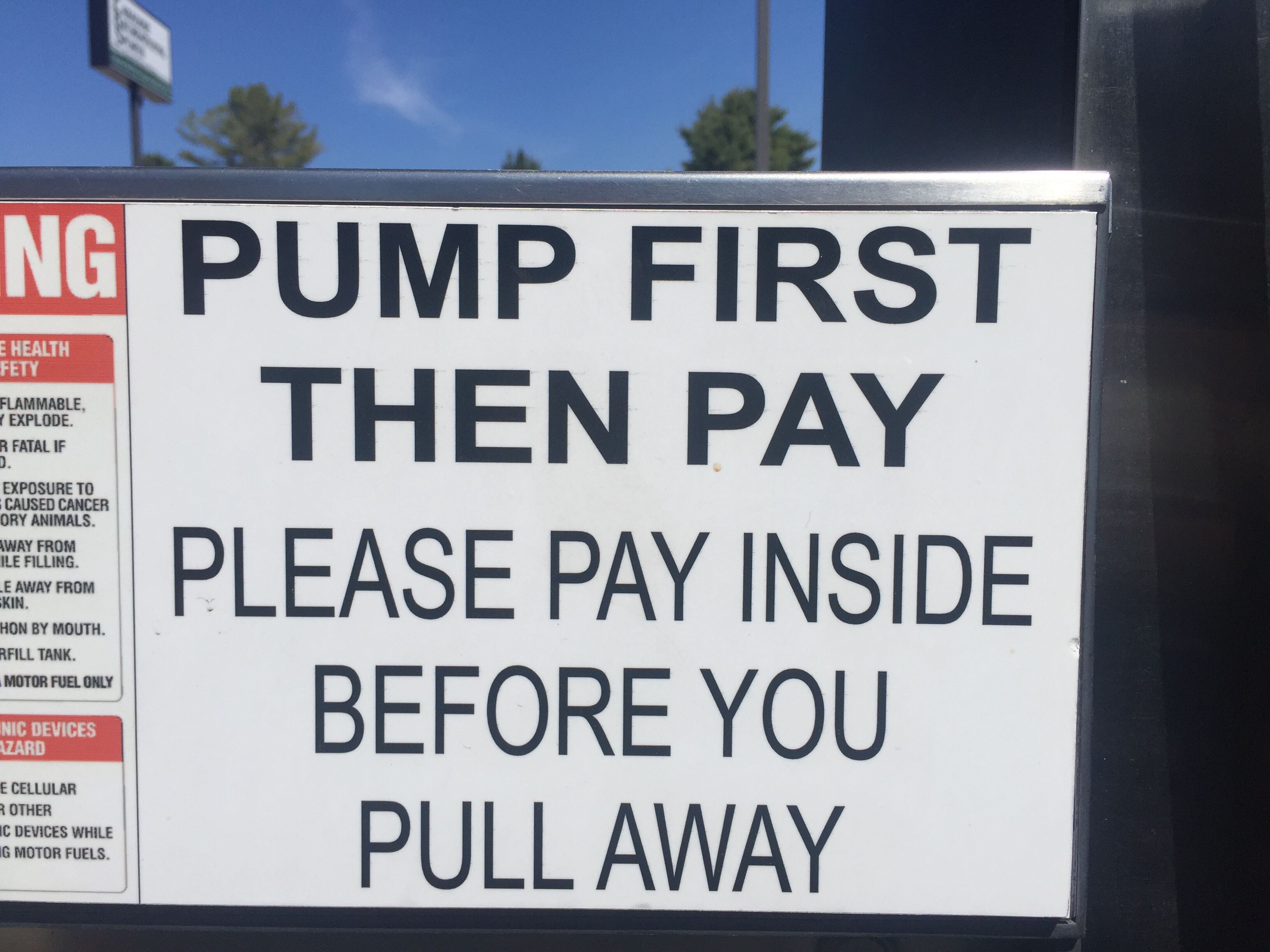 A little after four in the afternoon, we made it to the campground and set up the tent.

Our numerous camping purchases helped us to quickly organize the camp.

The lack of sleep from back-to-back late nights at wedding receptions and the long drive had destabilized some people.

Our campsite was at the Lower Falls Campground, and the Lower Falls at Tahquamenon were a short walk away, which was important because McKenna had become strongly anti-hike in recent months. During the spring, we had gone on a three mile hike in Richmond, a distance that inspired bitter complaining from McKenna. In an uncharacteristic show of restraint, Laura chose to handle the complaining not by killing McKenna, but by bribing McKenna with ice cream. The catch – McKenna had to finish the remaining half of the hike without complaining any more. This worked, as McKenna technically did stop complaining, instead exploiting the “I’m just asking questions” loophole in Laura’s bargain to complain in a veiled way, asking things like “This sure is a long hike, isn’t it?” and “How long have we been walking?”

As it turned out, the distance to the falls wouldn’t be the problem as much as the bugs. One of the things we noticed at once on the Upper Peninsula was the mosquitoes. They were omnipresent and gigantic, more like vampiric pterodactyls than normal mosquitoes.

After this, McKenna’s tongue looked like a deflated balloon.

Through the malarial haze, we made it to the Lower Falls. Falls. 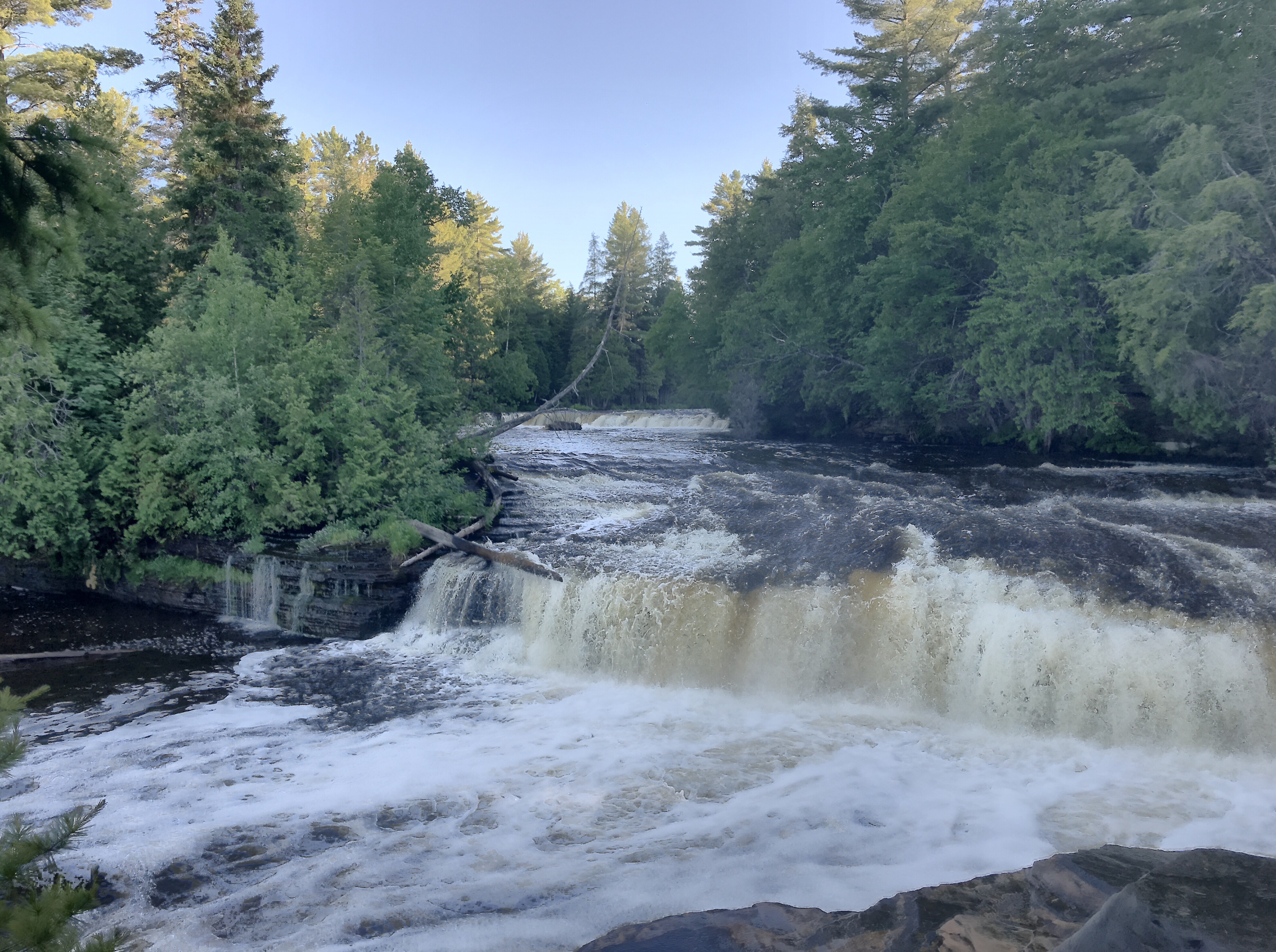 Quick! Smile before the mosquitos know you have stopped moving!

After our victory over the bugs of the Lower Falls, it was time for a celebratory s’more.

Plus, we were hoping that the mosquitos wouldn’t like the smoke.

The next morning, we woke up early to a beautiful morning.

We started to pack up early for the next leg of the trip. As it turned out, we would need the extra time to figure out how to get all of our camping stuff back into the car. 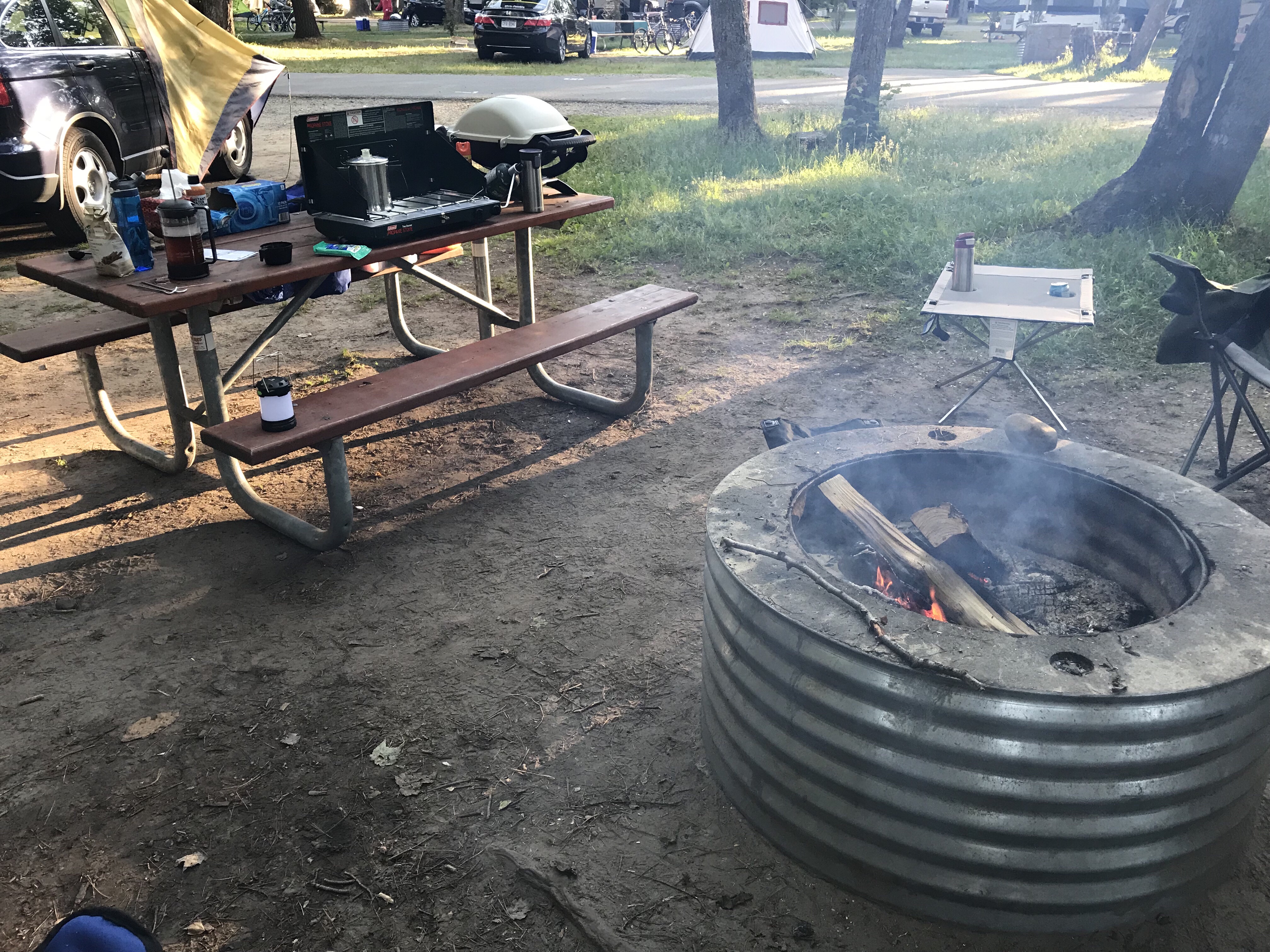 It is time for camping organization, version 3.0! Fortunately, someone in the family loves to organize.

Once we had crammed so much stuff into our car-top carrier that it achieved the density of a neutron star, we jumped in the car, hotly pursued by a menagerie of UP bug life.

Our trip could proceed once we had slain this dragon.

We were eager to get a closer look. 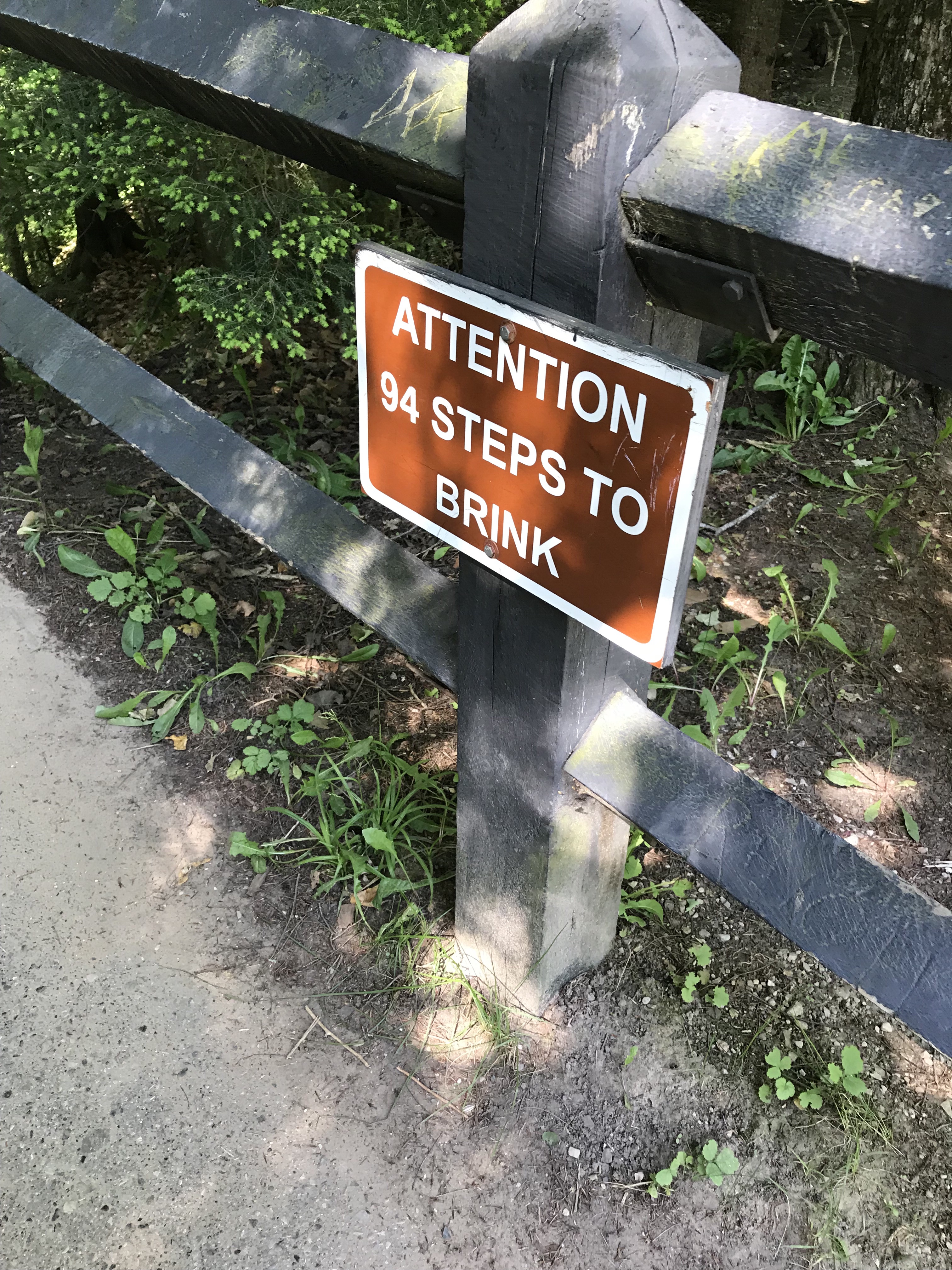 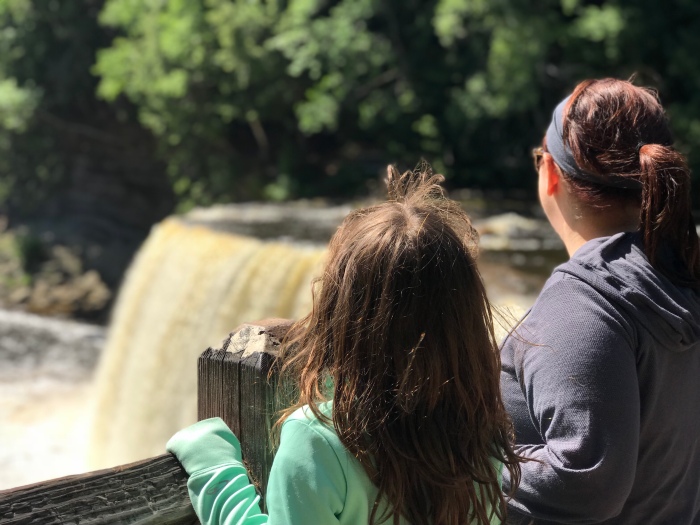 After the walk and 94 stairs down and up from the Falls, McKenna needed some enticement for the next phase of the trip. We decided to take the scenic route from Tahquamenon Falls to Pictured Rocks National Seashore, a route which did take us right along the coast of Lake Superior. The road, though, was somewhat underdeveloped.

It’s telling that of all of our rides on Michigan’s notoriously awful roads, this ride was the worst.

After what seemed an eternity of bouncing down the road, we made it back to gloriously paved streets. Soon, we were at Pictured Rocks National Seashore. One of the first stops we made was unplanned, the result of an emergency stop for McKenna to pee, a stop that, of course, came ten minutes after we left the last town for miles. Laura provided McKenna a quick lesson on squatting and then we walked to the “Scenic Overlook.” 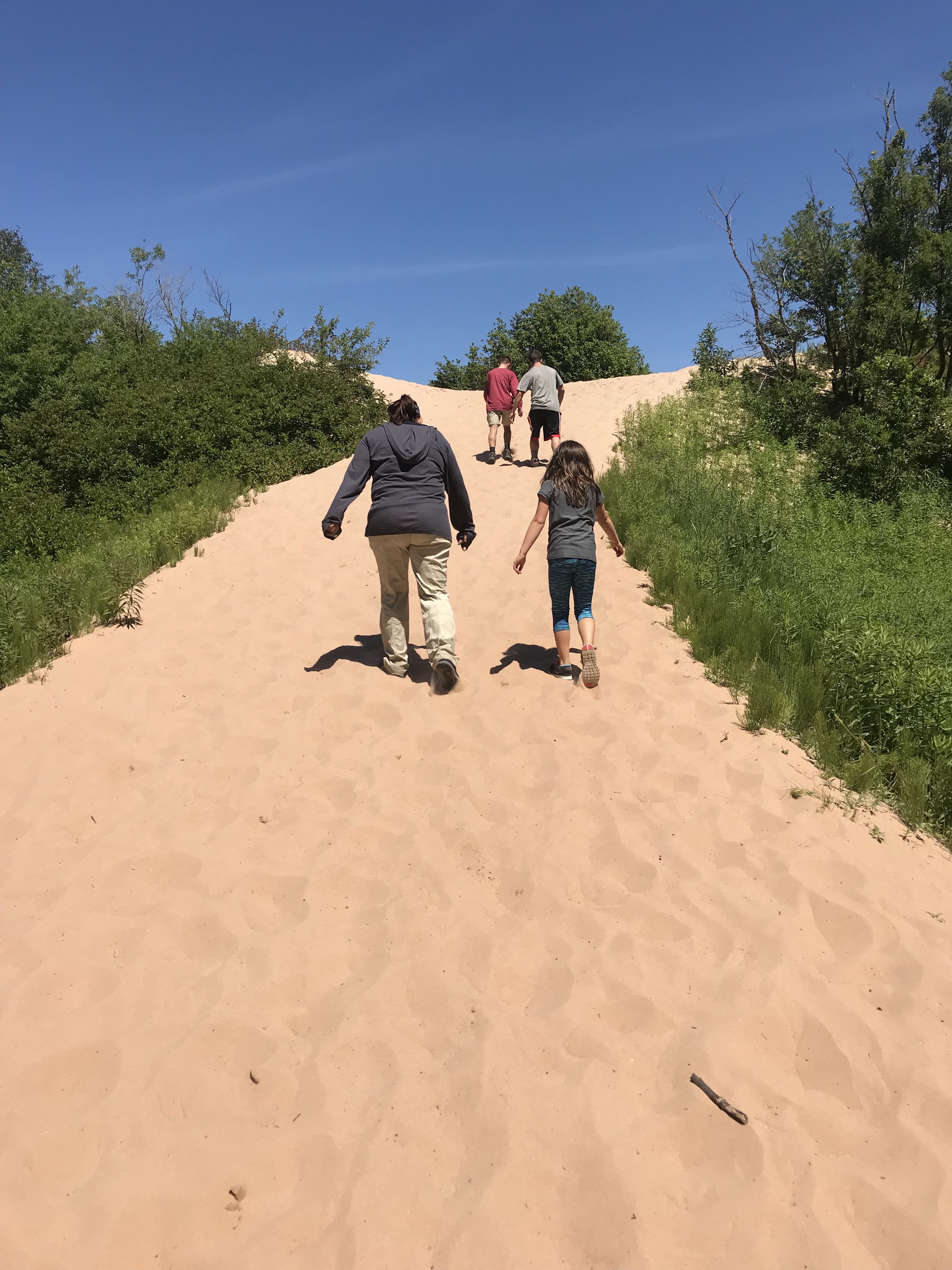 McKenna, who had been suspicious that we were trying to lure her into an unauthorized hike, was delighted to be reunited with an old friend. 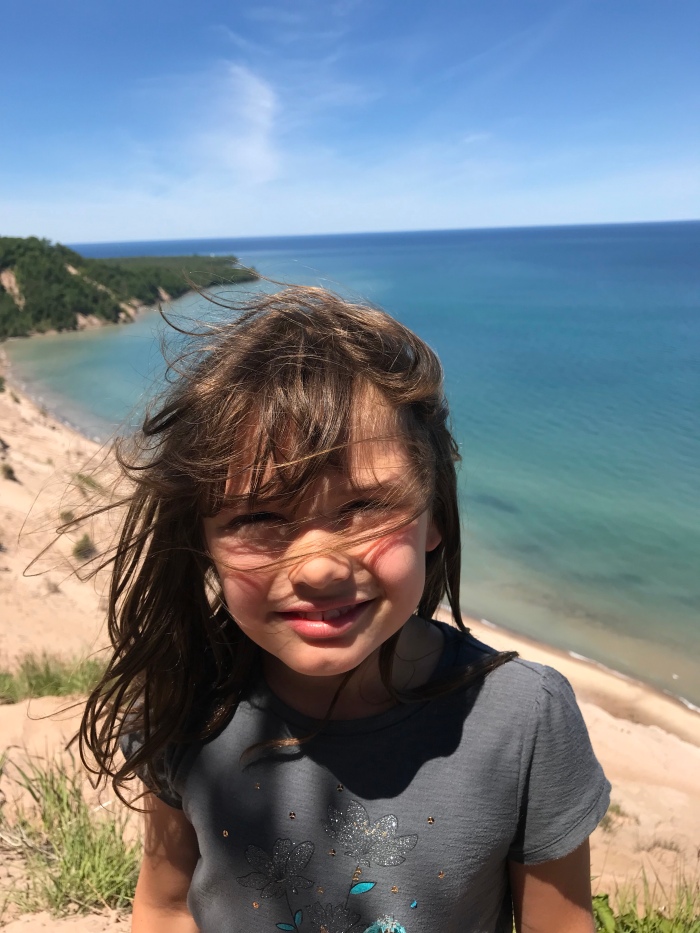 The most ambitious part of the trip was our hike by the Mosquito River to the shoreline Lake Superior. The trail we would hike was actually a loop that went from Mosquito River, to Chapel Rock and Chapel Falls, and back to the parking lot. Since the full loop was ten miles long, we opted for a scaled back in-and-out hike.

About two miles in, we made it to the mouth of the appropriately named Mosquito River, right by the shore of Lake Superior. 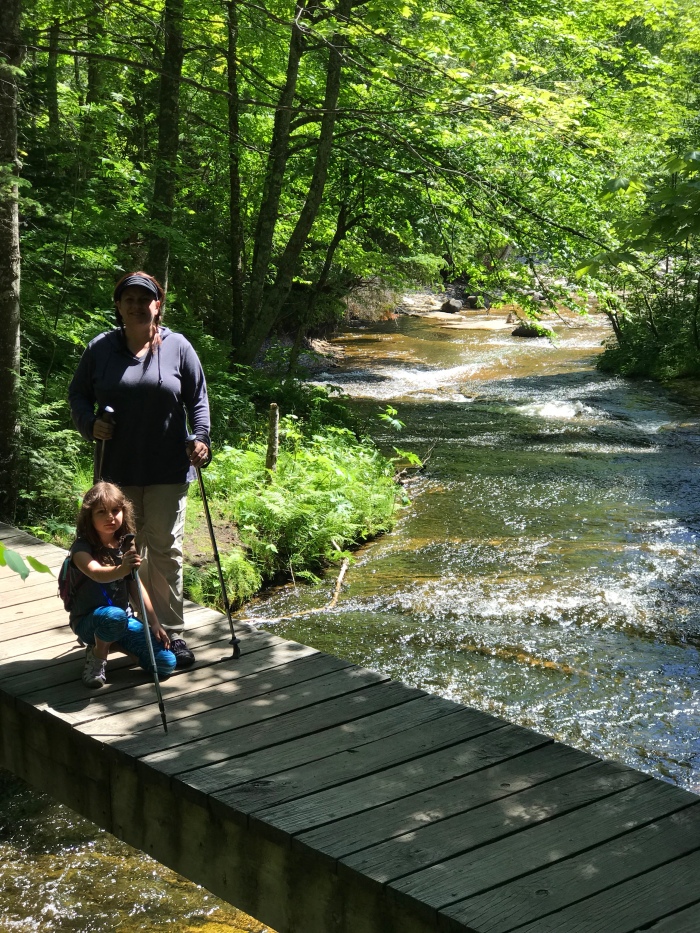 We took the trail up to the water’s edge for our first view of Pictured Rocks. 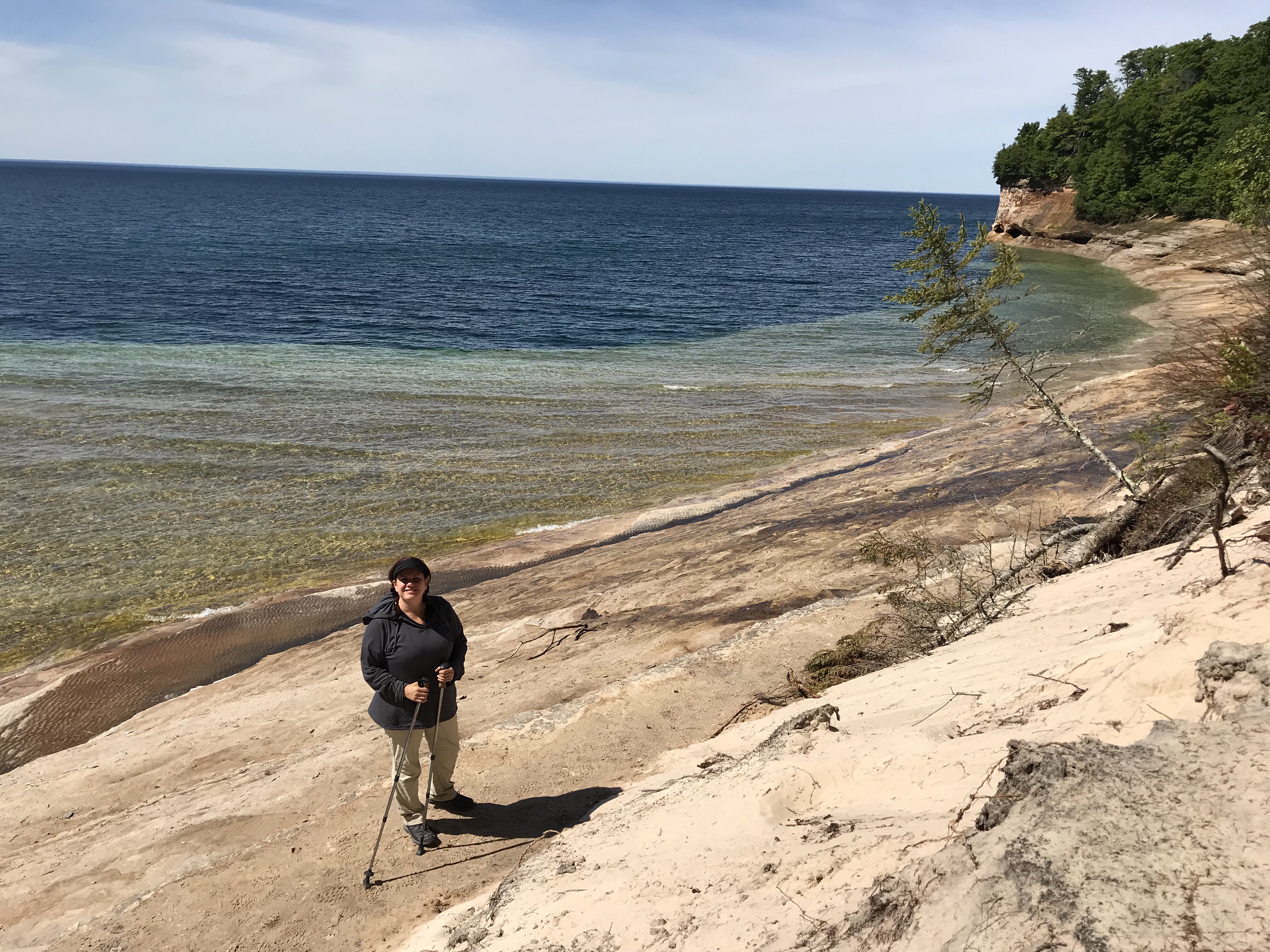 We didn’t have as much time as we would have liked to see the cliffs, and Laura and I agreed that we would have to come back to see more. What we did get to see was amazing. 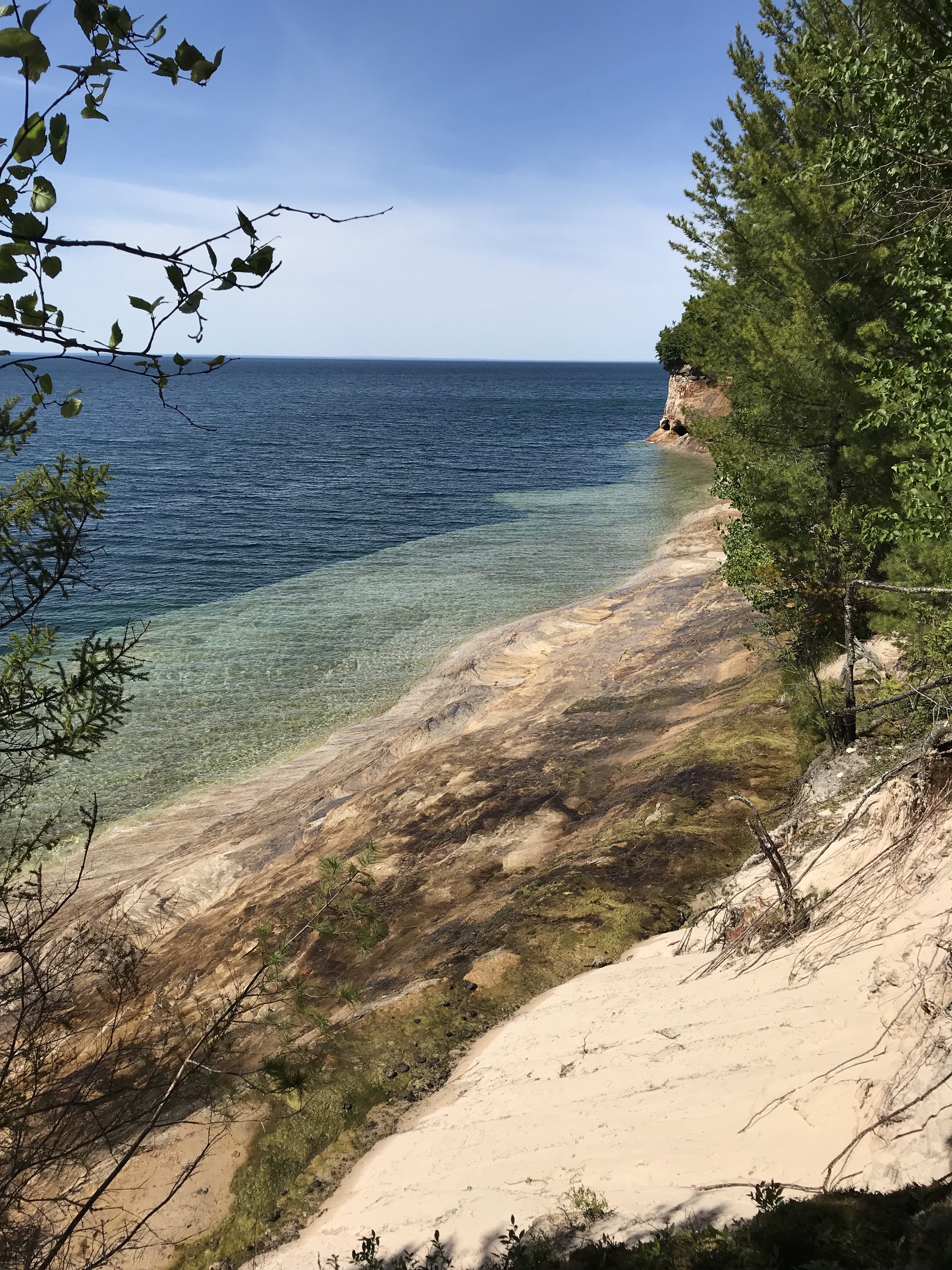 At around 4pm, we decided to turn around and go to the beach at the mouth of the Mosquito River. 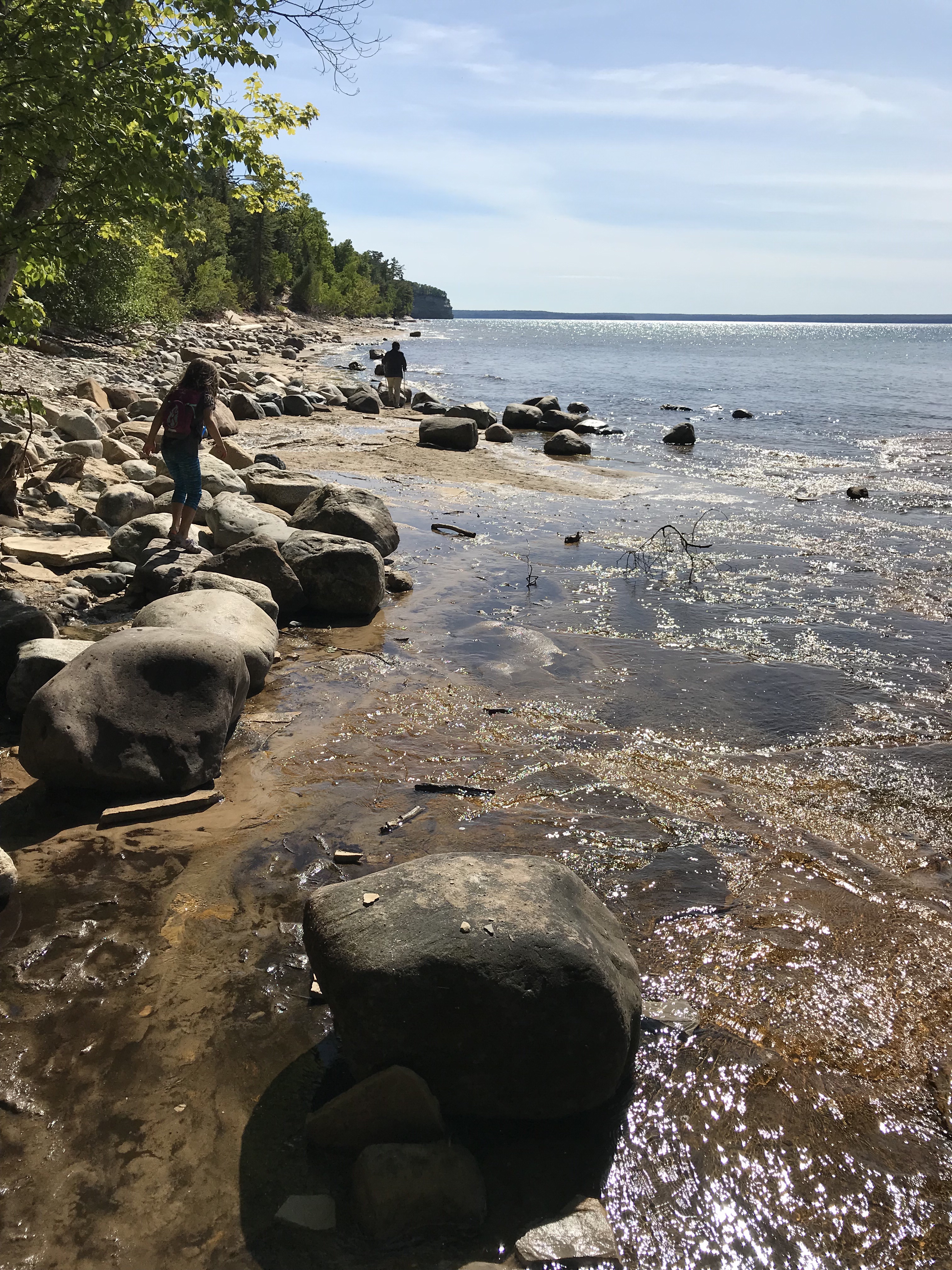 Unexpectedly, McKenna did a great job on the hike, complaining very little on the more than five mile hike. By this point, however, she was happy to go back to the car. It was time to extract ourselves from the wilderness.

The last stop of the day was at Lakenenland, where someone had put together a roadside exhibit of junkyard sculpture art.

We squeezed in Lakenenland because it had two things going for it: a strong recommendation from Laura’s Uncle Alex, and, more importantly, that it could be seen from the car.

Between the hike and our many stops, we had made it only about halfway to our hotel in Ironwood, Michigan, right by the border between Wisconsin and Michigan. By sunset, we still had a ways to go, and the bugs on the peninsula were particularly thick; at one point, the sound of bugs hitting the windshield sounded like rain. The next day… 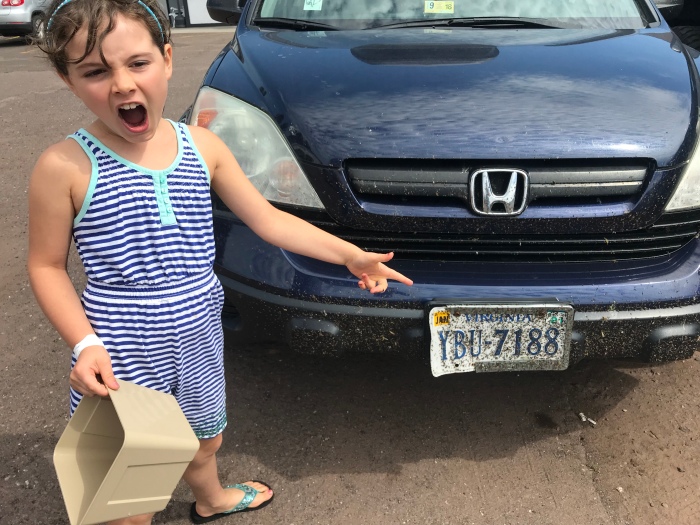 One thought on “From Weddings to Waterfalls in Michigan”