After our night of major monuments in Paris, we headed out to Versailles the next day to see the palace and gardens. We arrived early, before the palace opened at 9am, and had a chance to see the newly refurbished front entrance. While we were waiting, it was time for… 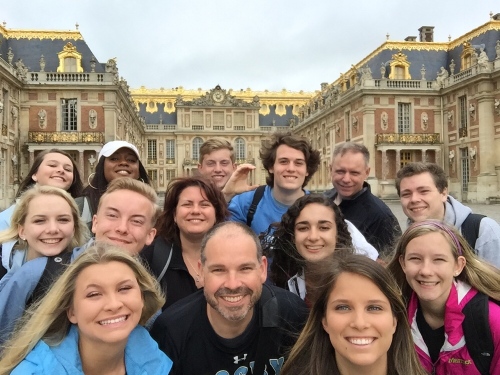 A selfie! Louis XIV, who thought of himself as God’s chosen representative, would have approved of our narcissistic impulse.

When we were able to enter, the group naturally separated. A majority of our travelers avoid reading the informational placards as if they will be exposed by the placard to the kind of reality-shattering knowledge that should be avoided at all costs. That group quickly navigated through the museum portion of the palace. The placard reading minority proceeded at a more stately pace.

This model of the Versailles grounds may have been overlooked by travellers who felt that the model was too dangerously close to a placard to risk looking at.

Finally, we made it to the largely placard-free furnished portion of the palace.

Versailles is amazingly ornate, with paintings on the ceilings as well as the walls and carvings everywhere.

Although the king’s very fancy bed has about ten pillows too few for Laura.

Check out France’s borders. Sorry, Low Countries – God’s chosen representative would really like to vacation on the Rhine.

The Hall of Mirrors is my favorite part of the palace. This is probably the most decorated of the ultra-decorative rooms, and it wasIn this room that the German Empire was proclaimed in 1871 and the Versailles Treaty ending World War I was signed.

Which made it the perfect place to violate the palace’s no selfie stick rule. 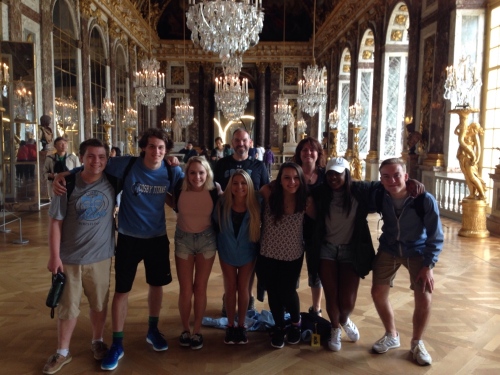 It turns out you can also ask other people to take pictures of the group.

When we finished touring the palace, we headed out to the gardens, which were in full bloom.

The main fountain in the gardens had just been refurbished, and we chose this spot for our “Cosby C” picture.

Wait. Something is a bit off here…

Having overwhelmed ourselves trying to figure out how camera mirroring works (clearly, we are not the people you want writing “AMBULANCE” on the front of rescue vehicles), we downshifted to riding bikes in through the gardens.

Everything will be great as long as we don’t have to figure out which hand to lift off the handlebars to make a “C.”

When we returned to Paris, we stopped in the Opera District, which is known for its restaurants and shops.

We split up into small groups, which enabled everyone to do their own thing.For instance, several travelers could go into the French H&M while I could maintain my vow to never again set foot in an H&M in any country. While I am told that the Parisian H&M is way different than the American H&M, I choose to simply accept this rather than verify the information myself. Just as we were about to leave, and ten minutes after there was full sun, a rain cloud swept through. 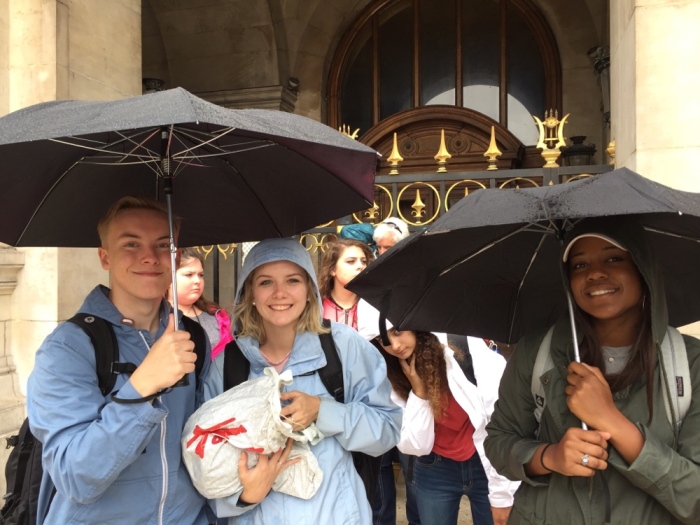 Quick, use your umbrella to protect these treasures from H&M!

We escaped the rain by taking the metro south, to the Catacombs. While we waited for our turn to go in, we used the free bathroom in a nearby McDonald’s, and I can confirm that disgusting, nostril-burning McDonald’s restrooms are a cross-cultural phenomenon. Fortunately, we were heading to a much cleaner, more sanitary place: 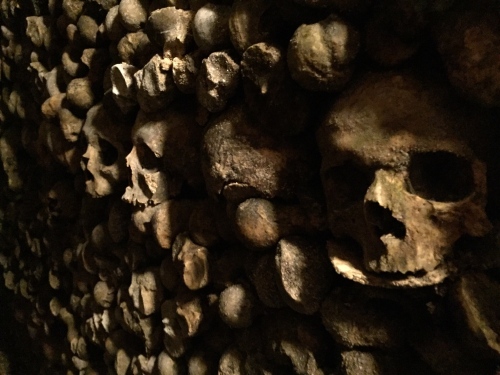 Again, most travelers bypassed the placards with their painful “reading” to head straight to the main attraction, which is what you see above. While we were in this fairly dark place surrounded by skulls and bones, Laura decided it would be a great idea to hide around the corner and scare Brian and Emma as they came close.

Here is Emma, right before Laura scared the happiness out of her. 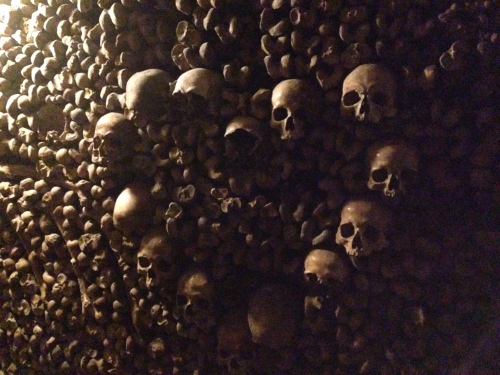 In spite of the joyful heart above formed out of human bones, the Catacombs could be a bit unnerving.

When we emerged from the Catacombs, we took the Metro back to the hotel and then walked to Montmartre. On this night, ACIS had given us vouchers so that we could pick our own restaurants, which was a great way for the travelers to try new things. 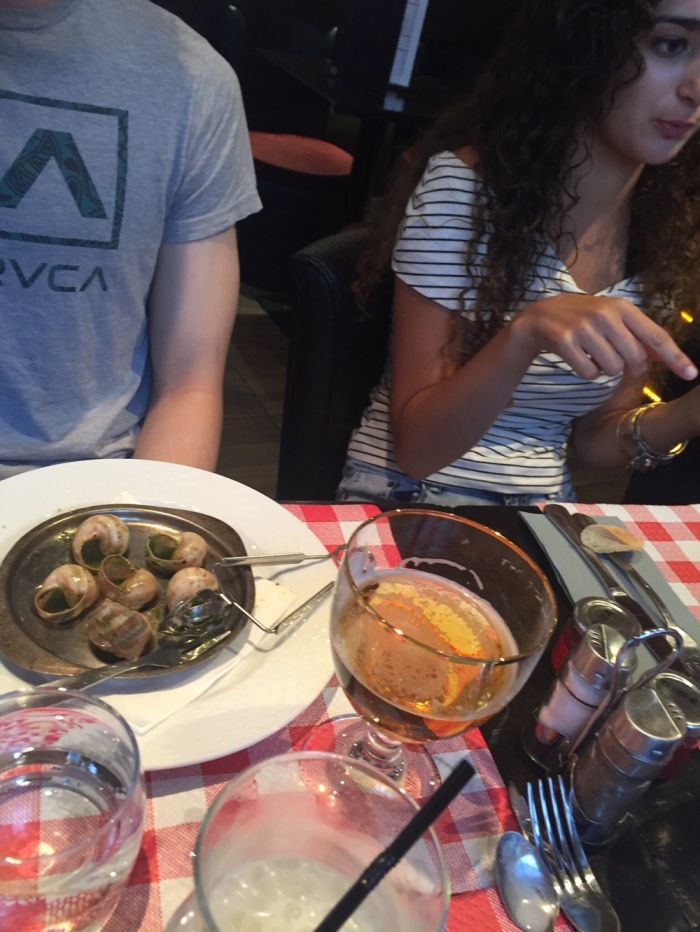 Our travelers learned that almost anything can taste good as long as you saute it in enough butter.

Sacre Cour on Montmartre has awesome views of the whole city, and one of the things to do in Paris is to watch night fall over the city while sitting on the church steps.

At this point, it was after 10pm and still light. We had hoped to see the Eiffel Tower light sparkle effect from the hilltop, but the Europeans had inconsiderately scheduled a soccer game the same night. Since the base of the Eiffel Tower was a fan zone where people could gather to watch the game, there would be no sparkle.

It was a real first world problem.

Before walking back to the hotel, we had a chance to see a street performer juggle fire sticks.