Once again, Jim and I went to Salt Lake City in June for the AP World History Reading, where we score many, many essays and make observations and discoveries that are only possible after destroying your brain by scoring many, many essays. The trip started on a high note, as on our way out to Utah, a dream came true for me on our flight from Dallas to Salt Lake. Due to delays, the seat next to me was open. In fact, the reality was even better than my dream because there was a bonanza of open seats. 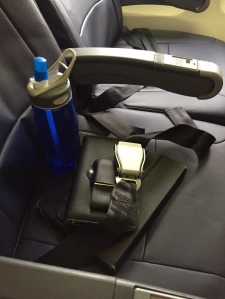 The iPad and Kindle buckled in for safety on the dream flight.

The most noteworthy development of the Reading happened on day two. After we got back from the reading that day, it occurred to Jim that he had heard this phrase “Netflix and chill” and wasn’t sure exactly what it meant, so he decided to look the phrase up on his iPad. Unfortunately, this came AFTER he had used the phrase in class, thinking that it meant to simply watch Netflix and relax with a friend. Nope. The nervous laughter in his class after he announced that, now that the AP World History exam was over, they would all have more time to Netflix and chill was a signal that there was an alternate meaning.

This is actually the second “Netflix and chill” classroom mishap that I’ve heard about this year. Laura had one of her classes brainstorm by writing on the board things that they would miss if the the Industrial Revolution had not occurred, and one student wrote “Netflix and chill.” Apparently, this made some students feel awkward (two classes later of course), and one of them gave Laura a heads up that she should erase the phrase. Laura responded, “Why? I like to Netflix and chill.” This reply evoked more horror than laughter, prompting Laura to ask, “What? I watch Netflix and chill all the time.” If only that were true.

2 thoughts on “Netflix and Chill and other Utah Revelations”