Over Memorial Day Weekend, Jason, Jim, and I decided to do some “easy” hikes around the Blue Ridge Parkway. Jerry, Dave, and John could not go, prompting Jason to label them as “losers,” which sounded very Trump-like, so I suggested giving them all Trump nicknames. Jerry, with his short attention span, should be Jittery Jerry. We’ll make John, with his land in Dinwiddie and chickens, Farmin’ John. Dave is Crazy Zune Dave, to commemorate the fact that he was the only owner of Microsoft’s ill-fated iPod competitor on the East Coast.

Anyway, free of sad losers, we focused on trying to find some hikes that would work. Most of the longer hikes in the area either have a lot of elevation gain or follow a river, so we opted for some mini-hikes that would give us a chance to see both rivers and mountains. It doesn’t get much easier than the “hikes” by the James River Visitor Center, which is located kind of in between I64 and Roanoke, so we started there.

I was led to believe this would be a “short” hike. Don’t make me regret leaving my hiking poles in the car by forcing me to cross an entire river. 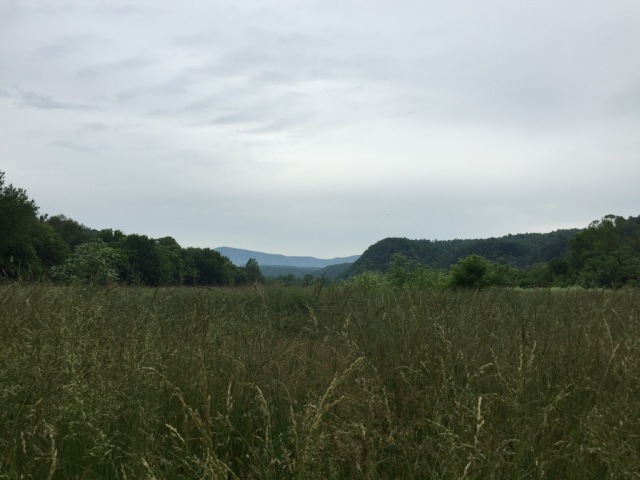 The trailafterlife scene from the movie Gladiator was basically a path mowed through this high grass. Had we been a little less mature, we might have recreated the afterlife scene from the movie Gladiator in the grass. Yes, it was either our maturity as 40+ year old males or the fear of snakes that kept us out. The highlight of this trail was an old river lock used to help barges transport goods to and from the mountains.

And another likely home of snakes.

I have discovered a tree!

Next, we headed north to Yankee Horse Ridge, an old portion of train tracks I found when I was in the area with Laura in the fall.

We walked along the trail of trees from the tracks to a waterfall a little ways up.

Imagine the disappointment hikers must feel realizing that they walked the 100 yards to this waterfall and forgot their hiking poles.

After Jim overcame his disappointment, we jumped back in the car to drive to the trailhead for White Rock Falls.

Again, if we were slightly less mature, Jason would pretend to hold up that giant rock as if he was the Incredible Hulk.

We navigated the trail of trees to the waterfall, which was a great spot with actual falling water (falling water is no sure thing at Virginia waterfalls).

And if there’s one thing that improves a waterfall with actual falling water, it’s…

We hiked back to the car through the trail of trees and continued north, stopping at Raven’s Roost overlook.

At the overlook, there is a tree by the edge of a cliff. On this day, this was the site of a lady hectoring her mother into standing by the tree for a picture. The exchange went something like this.

Lady with thick southern accent: Go ahead maw, stand by that there tree for a picture.

Maw: That seems close to the edge…

Lady: Oh, just get by the tree!

Maw: <tentatively stepping over tree roots> Aren’t you too far to take the picture?

Lady: I can work magic with this camera! There’s a button that will zoom in or out lickity split! Oh, the lens cap is still on…

Maw’s photo shoot took so long that I took a picture of this instead of the tree.

Near the infamous tree, we found a stone-topped picnic table that looked kind of like an altar. If we weren’t mature adults in our forties, we’d…

We were nearly to the end of the Blue Ridge Parkway and wanted to do one more short hike. Initially we had ruled out Humpbacked Rocks, a popular Blue Ridge hike, because Jason had hiked it a few weeks earlier and the hike is basically astraight incline up the mountain. Now we changed our minds.

It had started raining, converting the trail of trees into a trail of mud. But the trail was listed at only 8 tenths of a mile – how bad could that be? 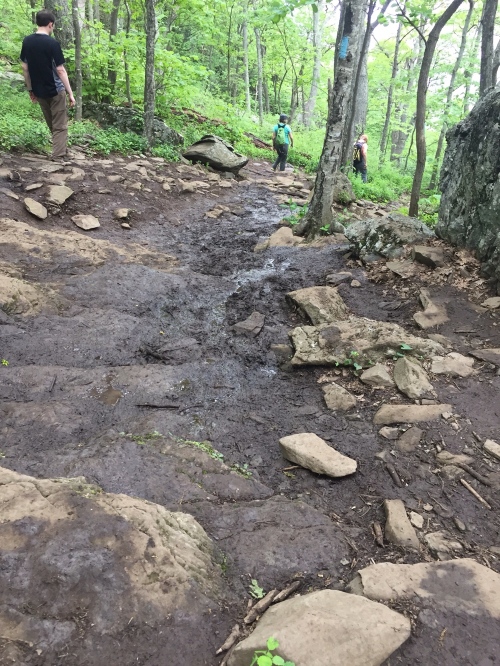 We overcame slick rocks, muddy trails, and a steep incline to make it to the peak, where we had the liberty to meditate on life’s important questions. 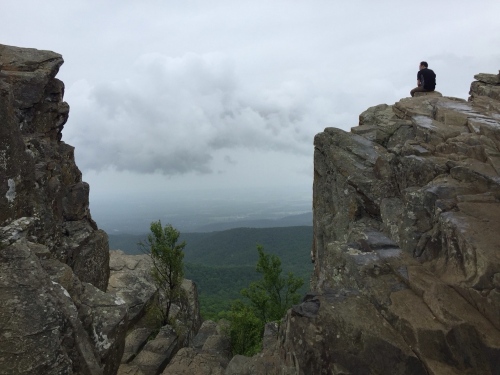 “How the hell am I going to navigate those muddy rocks without hiking poles?”

Good thing we have this blog entry detailing exactly where we went.

The beer was good, but not great – it certainly won’t challenge Jim’s love for Devil’s Backbone beers. The fried Oreos dessert, on the other hand, was all that I had hoped it would be. 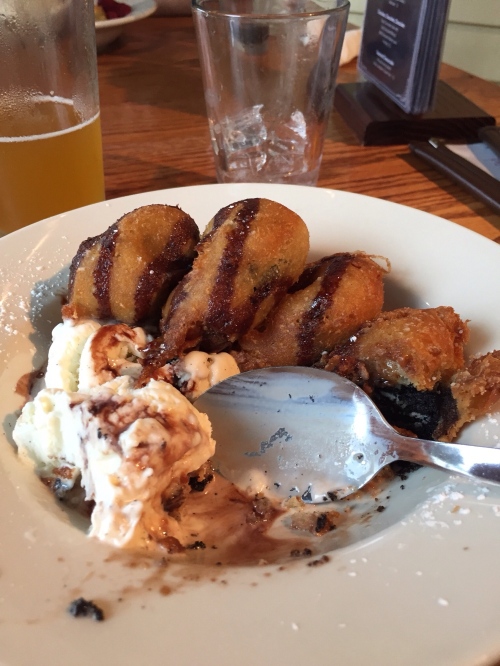