On August 18, we disembarked from our cruise ship and took a cab to the train station in Basel, Switzerland. The cab fare was our first clue as to how expensive Switzerland was. People had warned us of the expensiveness of Switzerland, but it is so expensive that we didn’t really grasp the expensive nature of Switzerland until we were there, witnessing firsthand its expensivity. 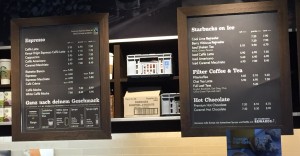 How expensive? A grande Starbucks latte was almost 7 bucks. Two lattes literally cost more than a steak dinner at Outback.

We went to Zurich from Basel, mainly because that was the best place for us to fly out of since our cruise ended in Switzerland, although the place to go to see cool things in Switzerland is the Lucerne region. At this point in the trip, we were too tired to take another train out to one of the mountains around Lucerne; the fact that it was actually snowing on Mount Titlis was tempting, but we were done with train travel. Plus, the tickets would likely have cost even more than two lattes.

So instead we walked around Zurich seeing the sights, which were free, I’m sure in spite of the best efforts of the Swiss. 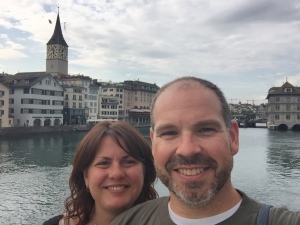 This view is $14 cheaper than two lattes.

Most of the cities and towns we had visited over the previous two weeks were fairly flat, but Zurich was hilly. That meant that there were some great hilltop views.

We followed the canal to Lake Zurich. 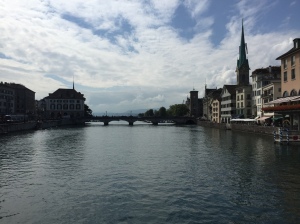 The plan was to simply walk around the lake, but, as it turned out, a short boat trip was surprisingly inexpensive, running just over two Swiss lattes in cost.

I’m not sure why, but the Swiss REALLY love cranes. There were cranes everywhere.

The Swiss have accumulated such vast wealth from selling $7 lattes that they apparently use cranes to move everyday things like groceries and laundry.

We had good seats on the front of the boat and were enjoying a peaceful ride… until the Swiss version of “crazy guy who talks to himself loudly” came out there.

It’s at least moderately disturbing to hear someone hold a full conversation with himself in English. But when that monologue is spoken in German, by a man with a deep voice, it’s downright terrifying. He was giving off a vibe like this:

After a more peaceful ride in the back of the boat, we disembarked and grabbed a delicious street bratwurst.

No, swan, this is my street bratwurst. SWAAAN!!!

Like people on boats who talk to themselves, the shopping district in Zurich is insane, and, unsurprisingly, expensive. This banking thing is apparently working out for the Swiss

The CHEAPEST watch in this display was $4,000. So I could either buy that watch or make a quarter of a year’s mortgage payments on my house.

I chose to take a picture of this four floor toy store instead of the $560,000 necklace. And yes, that is a salon for children in the back.

Finding dinner in a restaurant that wasn’t expensive was a bit of a challenge.

Those chicken nuggets better be laced with steak or something.

It wasn’t unusual to see burgers and fries for $30 (!). On the plus side, the restaurant scene in Zurich was surprisingly diverse – in just the Old Town, there were Japanese, Chinese, Falafel, Italian, American, Indian, Argintinean, and Mexican restaurants. We finally settled on pasta that was about the same in cost as it would be in the U.S.

We made up for the dinner savings by purchasing two drinks more in line with typical Swiss pricing near this Cathedral.

The next morning, our flight left Zurich at 7am, and we left the hotel at 5. It was a rainy day, and rainy days always make it easier to return home from vacation. 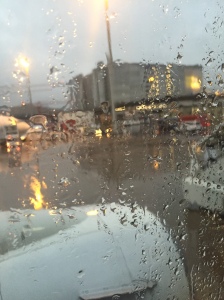 We flew out of Europe through Amsterdam’s highly entertaining airport, which had a store where we found these cigarettes for sale.

22 hours of travel later, complete with airplane engine trouble and temporarily lost luggage, we were back in the the land of the free and home of the affordable lattes.

One thought on “A day in Super Expensive Zurich”