On Sunday we woke up early to take the train to Bruges. We managed to navigate both the metro by the hotel and the train station, in spite of naming conventions used by both that seemed designed to confuse tourists. For example, our train left from the “Midi” station in Bruselles (their central station), but the station is also known as “Zuidstation,” which means south station. Maybe it just exists in both the center and south of the city like some kind of magic Harry Potter train station.

On the train, the European version of Obnoxious Public Phone Talker sat behind us, talking on her phone at rock concert volume levels. She was using her headphones to have the conversation, and maybe she just didn’t realize that the speaker in her ear wasn’t also the microphone. Fortunately for this woman, her phone call ended right before Laura would have killed her. Vigilante train justice was narrowly avoided.

Train stations are really, really convenient in Europe in spite of the occasional language difficulties. There are actually lockers for rent that are big enough to store luggage, so travellers can stop in a place for the day, see some sights, and then hop back on the train.

We used the pay bathroom at the Bruges train station, and then bought coffee from the Starbucks in the station. I love European coffee, but there is a reason that Starbucks has taken off in Europe – they offer more portable and larger quantities of caffeine than the majority of European cafes. Most European coffee shops don’t offer coffee to go (although more and more are), and while there are times that I don’t mind sitting in a cafe, drinking coffee, and wondering if the waiter will ever bring the bill, sometimes I need to get coffee in the morning and then beat the horde of grandparents from Florida as they descend from their bus to a popular tourist sight.

After fueling up, we walked across the street to Minnewater Park, which was beautiful in the morning. We got to the park early enough that most of the tourist buses had not yet arrived, so it was nice and quiet. Nine o’clock on a weekend seems to be the absolute crack of dawn for the Belgians and French, and the shops were almost all closed.

The serenity was broken once again by bees.

The rest of the morning was much more peaceful. Bruges in the morning is ridiculously idyllic. At one point, two swans swam down the misty canal as if someone was filming a tourism commercial. 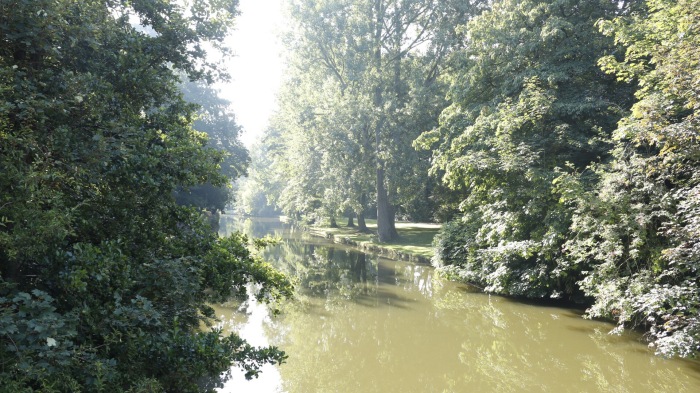 in taking this picture, I just missed the Disney animatronic swans that swim by every so often.

Beware, though, of the most unfun treehouses ever devised by humans.

Like other places in Europe, opening times were loosely adhered to in a way that would have provoked outraged Yelp reviews in America. However, the boat tours were definitely underway as scheduled, so we got in a line for a boat tour just before the line got REALLY long. Although there was a crowd in front of us, we made it onto the boat due the boat company’s policy of allowing almost enough people on the boat to sink it.

More people were squeezed onto this boat than I have in a high school class.

That gave us a chance to see those idyllic canals from another vantage point. 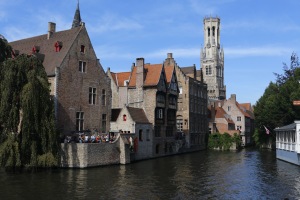 After the canal tour, we grabbed a sandwich and headed to the Markt, the central square in Bruges.

We noticed that the line for the Belfort was growing a bit long. The narrowness of the 366 stair spiral staircase that goes to the top of the bell tower limits the number of people who can climb at one time, so we got in line and waited. 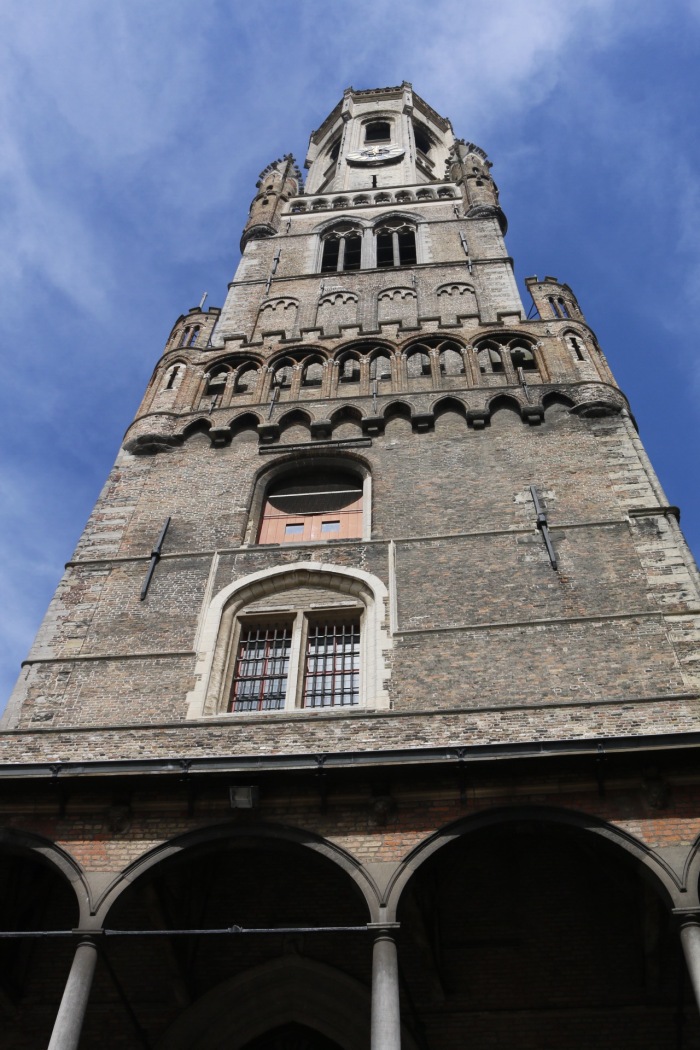 Once we entered the tower, we found that in claiming that there are 366 “stairs,” the tour directors of Bruges seem to mean that there are about 300 stairs and 66 ladder rungs.

There really isn’t a railing on the stairs; instead, there is just a rope. In addition, the narrow staircase/ladder is the only way up and down, so from time to time you have to squeeze in a corner so another person can get by. Still, the climb isn’t so bad because there are several stops along the way.

And the views at the top were pretty nice. 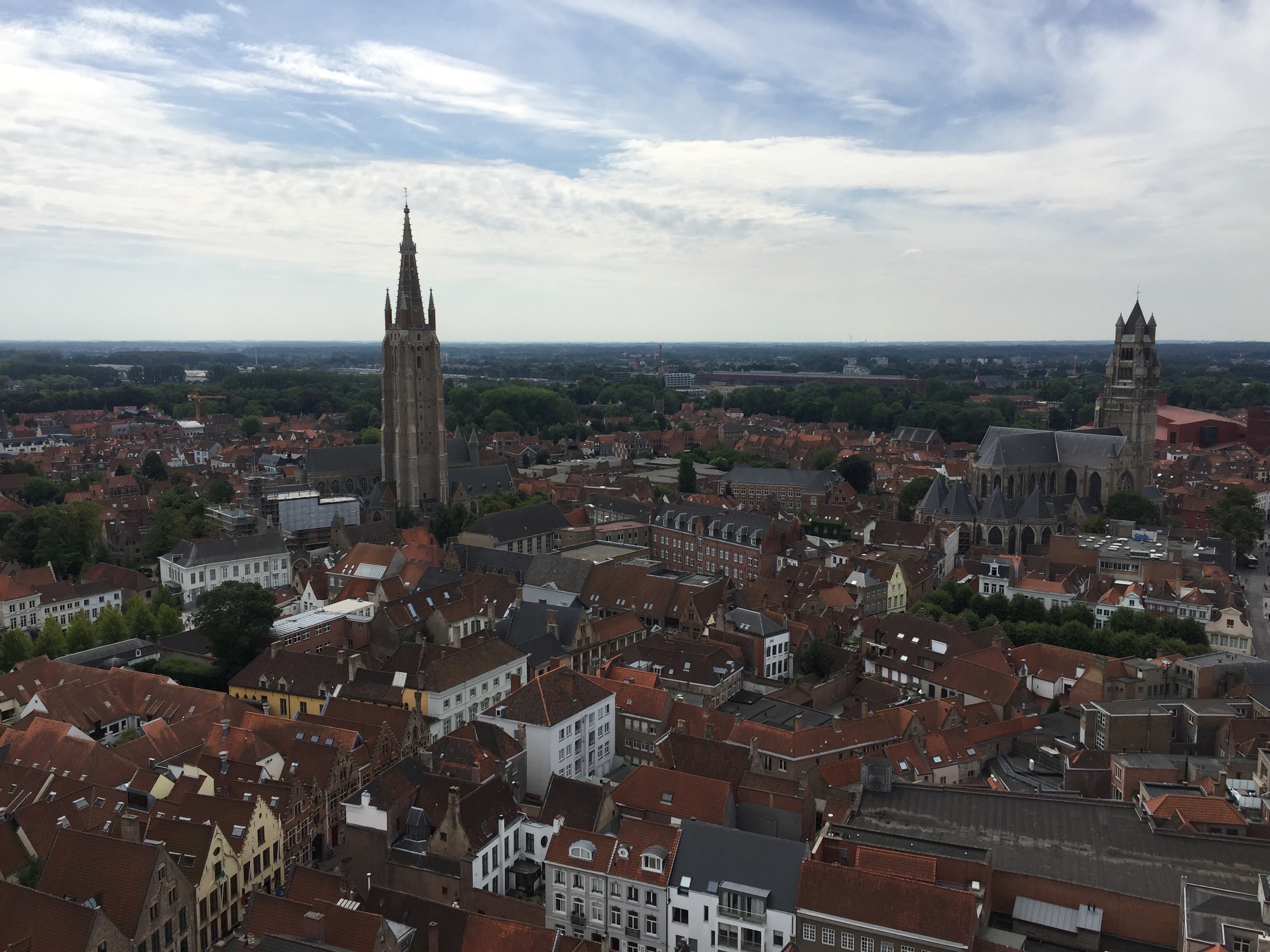 Some day, we may also climb those other towers. But not this day.

Back at the bottom, we had earned some street frites and curry ketchup, a surprisingly good combination.

Bruges helped to crystallize my dislike of large, bus-based tourist groups. On our previous trips to Europe with students, we had always been part of those groups, and I could feel the hatred other people had for us as we monopolized the most crowded tourist areas. The main problem with those groups is that most people in the large bus groups seem to have a pathological fear of losing contact with their group, so they will do ANYTHING to stay right behind the person in front of them, including running out in front of cars and trampling young children. Surely there was a way to escape the tourist hordes…

Bikes are cheap to rent in Bruges, and there are excellent bike-only trails. The trick is to get out of the crowded area of the city while relearning how to ride and not colliding with an oblivious tourist.

There are no people here! I can see the ground! 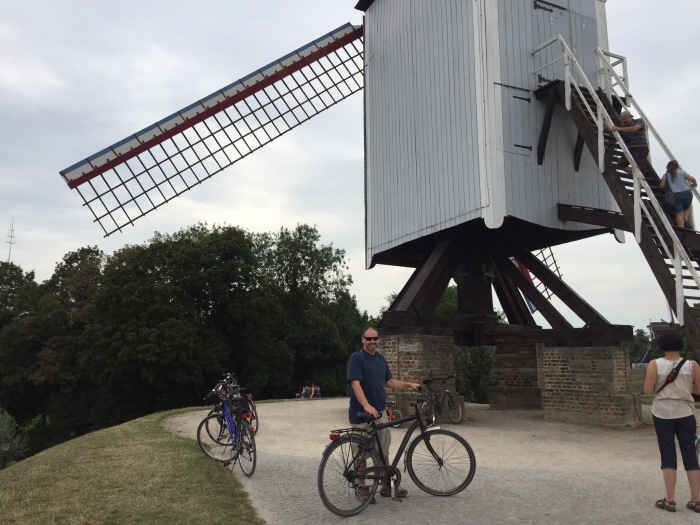 The other advantage of taking a bike trip around Bruges was escaping the smells of the city. For some reason – maybe because  it has been a hot summer – many parts of the city literally smelled like a sewer. So it was nice to ride through areas that didn’t smell like a month’s waste from a house boat had just been pumped out.

After a head-clearing bike trip, we went to Lizzie’s Waffle House, which is an outstanding little restaurant owned by two locals. It’s the type of restaurant where the owners love what they do and love helping patrons out. The waffles at Lizzie’s are supposed to be excellent, but we did not have a chance to try any since we had already had lunch and the waffles are enormous. Lizzie’s husband, who makes the waffles, did patiently answer Laura’s 73 waffle-related questions. We were there instead for a late afternoon hot chocolate; at Lizzie’s, this is made by melting a chocolate flower in hot milk. 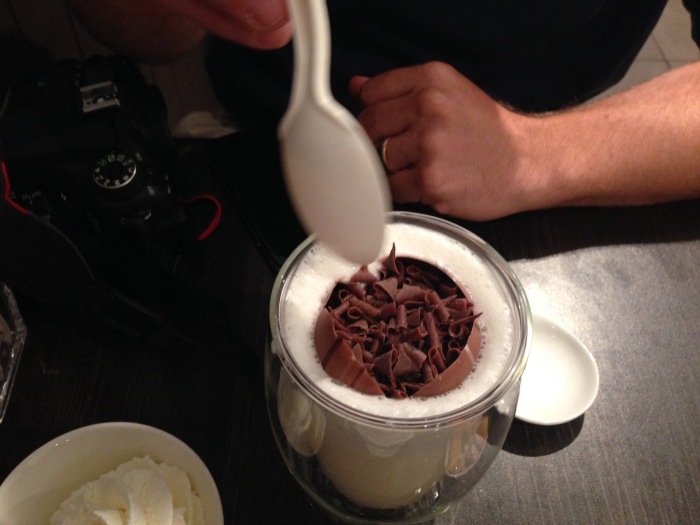 It was even more awesome than it looks

After the hot chocolate, we went to dinner, where I had another chance to try Belgian beer. Belgian beer is very good, but I think the notion that it is so much better than American beer is dated, coming from a time when American microbrews weren’t so widely available. You heard me, Belgium – your beers are overrated! They have been rated too highly!
Dinner was great, with two Englishmen at another table explaining how everyone in Europe still loves to hate the Germans. The conversation was so enjoyable that we almost waited too long to start walking back to the train station.

On the train, we inadvertently got on the first class car and were sent back to our proper seats in second class. At eight at night, the second class cars are another world, with people sitting everywhere, including between cars. The cars themselves were like being in a really bad movie theater – some super sticky drink had been spilled on the floor and there were random loud noises coming from certain populations. It was no Bruges.

One thought on “In Bruges with Thousands of Our Closest Friends”