Last weekend, while Laura was in Michigan for her cousin Rebecca’s wedding, I had to take McKenna to the doctor. Deciding whether to actually take McKenna to the pediatrician can be a bit of a challenge, partly because she’s four and treats any pain as critically urgent and partly because she may be a bit of a hypochondriac. Rumor has it that hypochondria runs in the gene pool. I’m not going to name names to identify potential hypochondriacs, but I will say that Laura once asked my dad, who is a doctor, if some dry skin on her face was skin cancer. As it turned out, this trip to the doctor was one of many where we paid money to find out that McKenna was fine. You’re welcome, medical profession.

So on Friday McKenna and I arrived at Pediatric Associates uncharacteristicly early, and we actually got in to see a doctor in a reasonable amount of time. Things were looking good. After receiving the same diagnosis that we had been given on at least a half dozen previous trips (“She looks fine”), the doctor wanted to run a urine test to confirm that McKenna was completely healthy. Since McKenna, like most four-year-olds, holds her pee until she’s ready to unleash it with firehose pressure, we were apparently in luck – McKenna had to go to the bathroom. 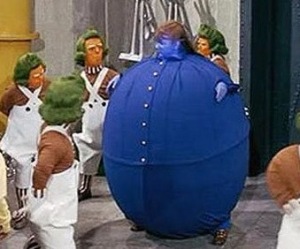 It’s amazing that McKenna doesn’t look like this after going hours between bathroom trip.

We went into the bathroom, and I explained to McKenna how the whole peeing-in-a-cup process would work. Then I set her on the toilet, picked up the cup, and… saw that she had already peed. There has been some premature urination, I thought, but surely that wasn’t all of it. Nope – McKenna assured me that there was nothing left. As a teacher, I have been to enough educational meetings to know that any breakdown in the comprehension of directions was totally my fault, so I focused on finding a way to salvage the situation.

I stared at the yellowish water for a while, trying to think of a way that I could extract the urine from the water and put it in the cup, where it belonged. Nothing came to me, so we went out and told the nurse, who had clearly dealt with similar issues before. She got a glass of water for McKenna and we started to pump her full of water. About fifty minutes and 5,000 false alarms later, McKenna peed in the cup, which gave the doctors the evidence they needed to confirm that, in fact, McKenna was just fine.