After running through zoos and theme parks for the past few days, we chose to have a more relaxing day in downtown San Diego on Friday. We had promised McKenna we would take her to the pancake house before we knew that there would be a 30 minute wait, and she is now old enough that we can't just casually disregard those promises the way we could when she was younger. I miss those days when we could just break inconvenient promises to our child. 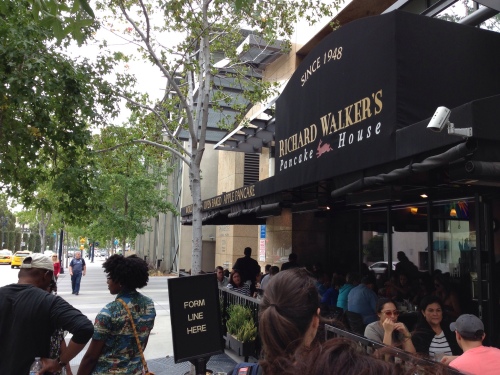 The line for the Richard Walker's Pancake House actually moved pretty quickly. The line inside the restaurant for the single-user restroom, not so much.

Thanks, elderly woman who spent ten minutes in the restroom for not observing this guideline. Even the woman with two toddlers who had to go potty and the man who ate an entire German pancake took less time than you.

The line for the restaurant was worth it though. McKenna ordered the chocolate chip pancakes, as is her way, and Laura and I split the Santa Fe Omelette, which was awesome.

That is the face of desire.

From the restaurant, we walked along the marina back to Seaport Village, where we had parked. Along the way, we saw something of the lifestyles of the really, really rich. 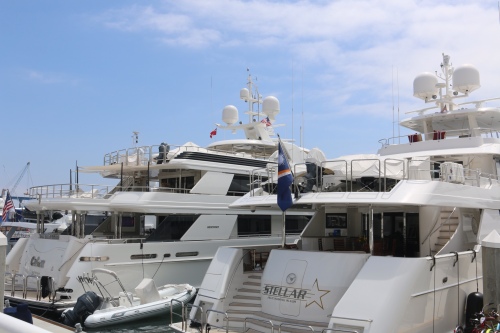 I'm pretty sure those two yachts have more square footage than my house.

Seaport Village is full of shops and restaurants, but McKenna was more interested in climbing the trees.

And by climbing trees I mean ascend approximately 3 feet before the fear of heights kicks in, which is usually when McKenna announces that she doesn't really like climbing THIS tree.

This area of San Diego, like every other place we visited, was full of purported psychics. 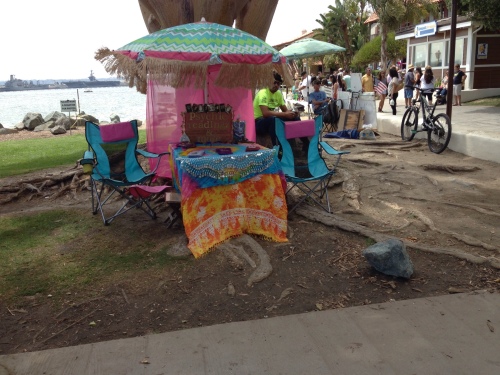 After picking up some chocolate at Seaport Village, we infiltrated the Hyatt at the marina to go to the 40th floor, which offered excellent views of downtown San Diego. 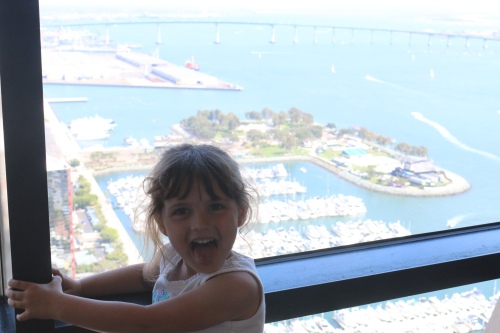 Fortunately, McKenna was unaffected by her fear of heights.

After the traffic jam we faced coming back from Legoland, we were wary of the traffic situation on any Sany Diego highway in the late afternoon, so we evacuated the downtown area at about 3:30. That gave us ample time to get to Mark and Margo's for the kids to act out that classic fairy tale, “The Prince, the Princess, and the Ninja.”

Drew wisely chose to wear full armor for the event.

For dessert, we finally had a chance to try the cherry pie that Margo had picked up from a bakery the previous Friday. While the taste was excellent, the presentation was a little shaky.

Unless, of course, we were going for the entrails of man disemboweled by zombie look. In that case, the presentation was an A+

On Saturday, we tried one more time to have a family beach day after the last try was washed out in a rare summer rainy day in San Diego. This time, it was cloudy and a bit cool, but we made it to the beach by Torrey Pines anyway. The water was nice, and the kids had a great time in the surf.

And the cloudy day was actually safer for babies and tourists from Virginia who sometimes forgot to apply sunscreen.

The seagulls in San Diego are bold, and McKenna still had not forgiven the entire species for the transgressions of a single seagull at Coronado, which stole half of her peanut butter and jelly sandwich. So when one of the seagulls stole some vulnerable goldfish that McKenna had brought for a snack, she leapt into action.

The seagull escaped four-year-old justice, and Uncle Mark proved to be just as elusive. 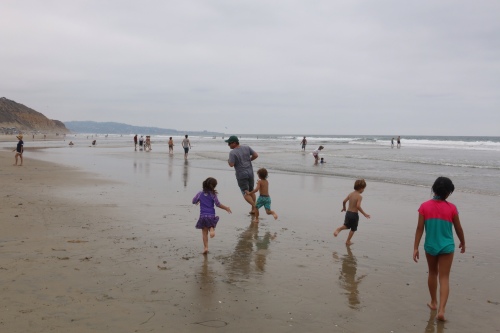 That night, Laura and I babysat Miles and Drew so that Mark and Margo could go out. Everything was going great until we demonstrated poor judgement by introducing a game during the time when the kids were supposed to be winding down for bed. In this case, the game was Sugarland, a Candyland knock-off that can be played on the TV through an Apple TV, and playing the game was like giving the kids a deep fried Snickers laced with crack.

This is what a complete loss of control looks like.

The following day was a bit calmer. I took McKenna to Mount Soledad, which overlooks the beach and city. McKenna took the opportunity to strike some poses, including this odd hair flip. 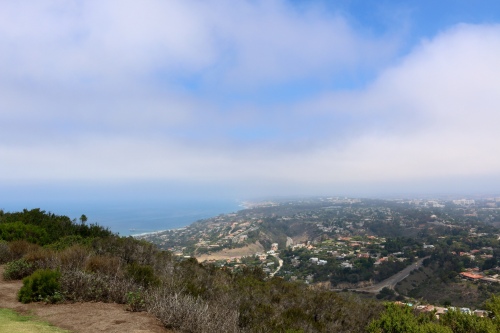 For lunch, Laura, McKenna, Mark, Julia, and I went to Stone Brewery in Escondido for some great beer. In fact, they had so many great beers available that my only regret in visiting the brewery is that I don't have a better alcohol tolerance. 23-year-old me would have been so disappointed.

Theres a nice garden area at the brewery where people apparently get married. And where McKenna unveiled Blue Steel.

A look which apparently runs in the family.

August 11 was our final day in California; we would be leaving on a red eye flight that night. During the day, we went hiking at Torrey Pines, which has some amazing views of the ocean, as well as some impressive rock formations. 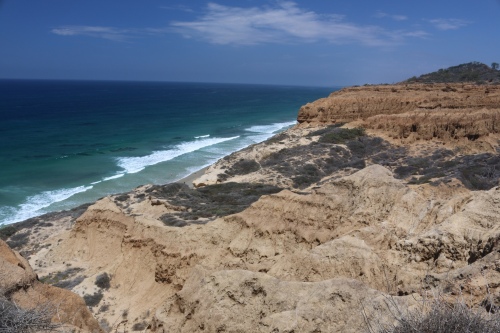 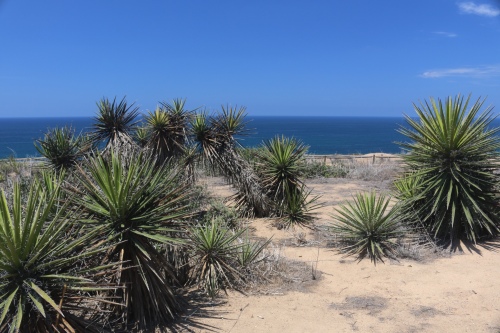 From the overlook pictured above, we took the trail down to the beach. That trail is a bit windy with a good number of stairs, prompting Laura to repeatedly warn McKenna that she could fall to her death. No, really.

After Laura's fourth warning about falling, I was pretty sure I had figured out the source of McKenna's fear of heights.

The beach at the bottom was one of those nice, flat California beaches, and it was so shallow that kids would have a hard time drowning. And that makes it…