In recounting our escape from O’Hare, it has been pointed out that I neglected to cover the on-plane experience. Having boarded and disembarked from so many planes lately, I have had a chance to study my fellow travelers, most of whom are just fine. The following people, though, not so much. Here are the top carry-on offenders that I have seen in my recent flights.

Max-Carry-On Guy – motto: I didn’t check a bag because I’m traveling light – Captain Carry-on has managed to bend all of the carry-on rules, in part by strapping together multiple carry-ons using bungee cords or whatever tethering material was available. And like a hipster who won’t stop telling you that they don’t have a tv, this guy brags constantly about not having to check a bag while transporting a metric ton of gear.

Yeah, I was able to pack pretty light…

Sociopathic Purse Lady – motto: I’m immune to shame – This person knows the rules; she just assumes they don’t apply to her. Multiple announcements by the flight attendants don’t stop this jackass from storing her purse in the overhead compartment, taking up just enough room to force you to have to check your legit carry on.

Fast Lane to Nowhere Guy – motto: Out of the way, peasant! – A close cousin of the Beeliner, this person is clearly more important than you and shows it by jumping in front of you to grab his carry on even though he has no connecting flight.

The Incompetent Packer – motto: how do I get this square peg in this round hole? – This person ignores tthe laws of physics as they try 25-50 times to cram oversized luggage into an undersized carryon bin. God only knows how this person managed to pack their carry on in the first place given how incompetent they are at filling containers.

The Wormhole Creator: motto: I can fit one more shirt… – This person found a piece of luggage that fit within carry on guidelines and then packed so much crap into the carry-on that it has swelled to five times it’s normal size. At any point, this piece of luggage is in danger of collapsing upon itself, forming a black hole.

After dealing with the awesomeness of air travel, we made it to Salt Lake City by about 8pm, and Jim and I miraculously were able to check in to the AP Reading before everyone went home for the night. This is the third year the reading has been in Salt Lake, so I’ll try not to repeat things I’ve already written about. Yes, there is beer in Salt Lake City. No, it’s not a normal place.

For one thing, all of the streets are gigantic. While that’s nice for thinning out traffic, it also means that blocks are longer than the average American walks in a day and you have a better chance of traveling by air without meeting any of the above carry on offenders than you do of making it to a crosswalk in time to hit the “walk” signal.

Odysseus completed the odyssey in less time than it takes to cross the average Salt Lake City street.

Plus, our hotel, the Little America, is laid out like a medieval keep, with choke points everywhere, either to be prepared for a zombie apocalypse or to keep out the surprisingly large homeless population in the city. As Jim pointed out, the hotel’s layout is like a first person shooter multiplayer map.

Don’t run around that corner too fast or Dave will assassinate you with the sword from Halo.

As far as the AP reading itself goes, I’ll say only this – when you put 1000 adults in a reading area and give them unlimited mediocre cafeteria food, bad things are going to happen gastrointestinally. There are only so many mass produced egg casseroles that a man can eat before something goes horribly wrong. In fact, my study of the reading has revealed that a single casserole may suffice. SCIENCE. 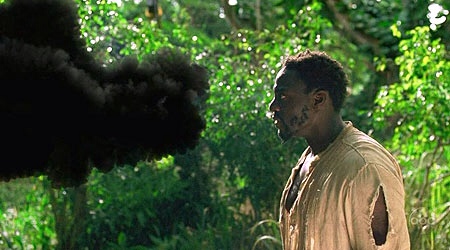 And the clouds of gas are more lethal than the smoke monster from Lost.

Although grading hundreds of essays isn’t as bad as it sounds, when I get out of the aircraft hanger-like grading area, I feel like this: