On the way to the Paris, I had a bit of a “Trains, Planes, and Automobiles” type day. Everyone experiences bad weather and delays when traveling by air, so I won’t bother you with the details. I will say, though, that the delays were strategically spaced in such a way as to make rescheduling difficult while not creating the type of panic that would have led me to reroute the trip through another city (which, in hindsight, would have worked). At the end of all of the delays, I ended up in the worst airport I have ever experienced – JFK in New York City. In order to spread awareness about the abomination that is JFK, I will now answer some frequently asked questions.

Is JFK the most poorly organized structure in the nation?

Absolutely. JFK comes in first in this category, just ahead of the killer’s house in True Detective.

The lack of organization at JFK: worse than the home of a Cajun serial killer.

I just looked at a picture of the layout and it looks pretty organized to me.

Don’t be fooled by this illusion of order. All of those terminals are like the separate districts in the Hunger Games. Sure, a survivalist like Katniss can jump the electrified fence to move from one district to another, but I have difficulty even jumping over non-electrified obstacles. And you are more likely to be struck by lightning while winning the lottery during a shark attack than to find this map in the interior of a terminal at JFK. On this Memorial Day weekend, I am saddened that such an airport stands on American soil.

What about O’Hare in Chicago? Isn’t that a worse airport?

I used to think that O’Hare Airport in Chicago was the worst airport. No. O’Hare is a an organizational masterpiece compared to JFK.

How can it be that JFK is worse than O’Hare? I despise O’Hare.

I hear you. This should give you an idea how bad JFK is – it has forced me to defend another awful airport. While O’Hare is a sprawling mess with no good restaurants, it does have adequate signage. 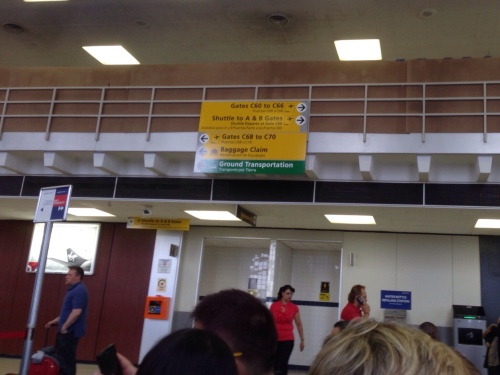 It sure would be great to know where the other terminals are. So I can escape District 12

In spite of JFK’s award-winning awfulness, I managed to escape to Boston’s well-signed airport today. Barring another catastrophic set of delays, I should be in Paris tomorrow.