Saturday was game day at Jim’s house, and the game of the day was A Study in Emerald. The site selling the game provides this description:

The premise is simple, the year is 1881 and the ‘Old Ones’ have been ruling the earth for over seven hundred years. Although most of humanity has accepted these monstrous rulers, there is a growing underground movement to overthrow the regime, labeled the Restorationists. A secret war is being fought around the cities of the Europe and the New World between agents of the Restorationists and those loyal to the powers that be.

That’s a simple premise? Huh. Maybe it’s just me, but I feel like a game like Memory can claim a simple premise because, my experience as a high school teacher notwithstanding, most people know what a memory is. On the other hand, a game that assumes a working knowledge of “Old Ones” probably shouldn’t be making any claims to simplicity.

As detailed in an earlier post, Jim’s games are notoriously complicated and typically obscure, with rules that are so involved that they are often hotly debated on the website Board Game Geeks. You heard me – HOTLY DEBATED. These are the game lovers, after all, who discuss the best ways to fix Trivial Pursuit. In the case of A Study in Emerald, the issue confronting the board game experts was whether there was some sort of double scoring at the end of the game. Needless to say, learning the rules is something of an ordeal. Learning a new game of this sort can take 45 minutes to an hour, or about 40-55 minutes longer than certain people can focus on a rules explanation (I’m looking at you, Laura and Jerry). Here’s a photojournal of the game explanation from today: 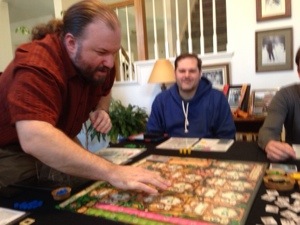 “As you can see, this game employs a variety of wood pieces.” 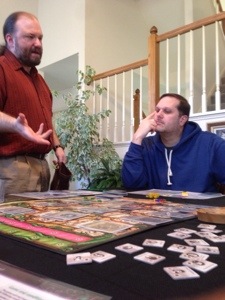 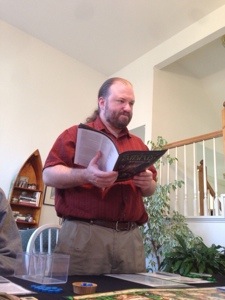 “I will now read from the Book of Rules about the square wood.” 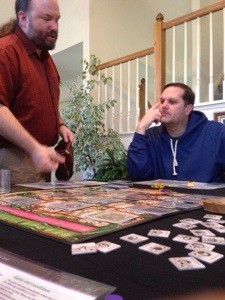 After the game explanation, Allen, Dave, Jim, and I were ready to play. That’s a lie – Jim and Allen were ready to play, having played already. Fortunately for the rest of us, the random player selector on Allen’s phone chose him to start, so the rest of us could stall while the more experienced players took their turn. Since Jason, Dave and I rarely know what to do with our first few turns playing a new game, a common strategy in our group is to simply block Jim from accomplishing whatever he’s trying to accomplish, with the understanding that since Jim knows what he’s doing, whatever it is he’s trying to do will be bad for the rest of us. Dave, having his turn just after Jim, immediately applied this strategy by playing a blocking disc on the card Jim was trying to select. The disc was cleverly renamed by the group the “cock-blocking disc.” That’s right – we are forty-year-old college educated men. 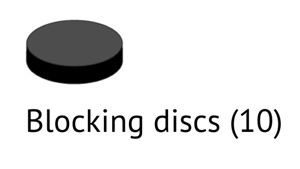 That’s a black cock block, for those of you scoring at home.

Somehow, Dave’s assertive play convinced Jim that he knew exactly what he was doing, when, in reality, this was the case: 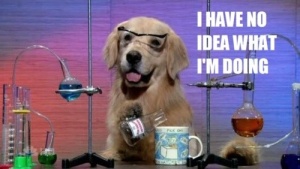 Dave was, in fact, struggling with something much more basic than figuring out how to beat Jim – figuring out when it was his turn. In his defense, spacing out during Jim’s lengthy turns is a common pastime in our group, and at least he didn’t fill the void by playing Candy Crush. 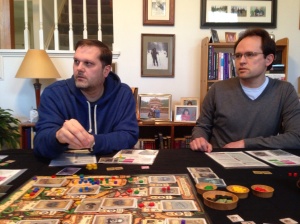 Or maybe Dave is playing Candy Crush IN HIS MIND!!!

Consequently, Jim concluded from Dave’s first move that he was playing for one faction when all of Dave’s subsequent moves indicated that he was playing for the other faction. In spite of Jim misreading the loyalty of every single player in the game, he scored the most points, triggering the end of the game. Tragically for Jim, the game includes what he described as a “cutting-edge mechanic,” which states that the winner’s faction must not include the lowest-scoring player. Jim had not correctly identified any of his faction members, so he could not have known that Allen, who had the lowest point total, was on his faction. The rumors on Board Game Geek notwithstanding, there were no double points to be had at the end of the game.

Riding his assassination of Moriarty (somehow Sherlock Holmes and Moriarty are part of that simple premise) and Jim’s inability to figure out who was on which faction, Jason won the game. 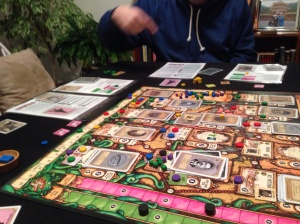 You
can tell from the colored wood pieces who won the game. No, not those wood pieces. Not those, either. The pieces by the numbers. The other numbers.

One thought on “Losing at Complicated Board Games”