The only downside to the DVD plan  – out of all the DVDs she had, she wanted to watch Little Einsteins with its FIFTY SOLID MINUTES OF TRAILERS.

Anyway, the DVD plan worked for the most part. In fact, things were so peaceful that Gayle was able to sleep. And sleep. And just when you thought Gayle was waking up, nope, she was just rolling over to sleep some more. That lasted until we approached some stopped cars, and the slowing of our car prompted Laura, who experiences a bit of anxiety as the passenger, to shout “WE ARE ALL GOING TO DIE!!!” This was shouted directly in Gayle’s ear, waking her up for almost two minutes.

On such a long car ride, you really take pleasure in the little things. Like the fact that the Pennsylvania Turnpike Service Station bathrooms had been upgraded to include seats for little kids. 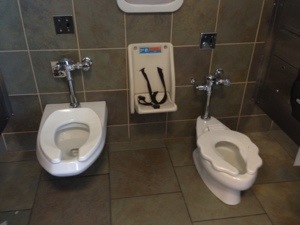 This is the most AMAZING thing I have seen since Breezewood!

Just before we reached Toledo, Ohio, we ran into some construction.

Two hours later, we had traveled the eight miles through the construction. At this point, we were so hungry that we actually stopped a Bob Evans. Pro tip: never stop at Bob Evans.