By the time we toured Rome, most of the group was exhausted. Making the crankiness worse, we had to wake up even earlier than usual to beat the rush hour traffic in Rome. At this point, the fast pace of the trip had really worn most travelers down.

Stop one was the Colosseum. Since we have so many huge sports arenas nowadays, I thought that the Colosseum might seem a bit small. That, however, was not an issue, and the Colosseum is an amazing structure, especially considering that the huge stones were placed with none of our modern machinery. Our guide, though, was less impressive. She was knowledgable but had no feel for her exhausted audience; between the sun and the lengthy descriptions, we almost had a few students slip into a coma. 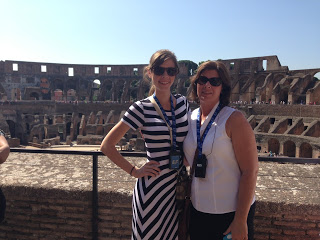 They may be this happy because I pulled them away from the guide to take this picture.

From the Colosseum we went to the nearby Roman Forum. We had the same guide for this tour, unfortunately, and I’m sure some of the kids would have preferred to be back in a classroom with one of my awesome powerpoints to spice things up rather than listening to our guide. At least that’s what I tell myself. Finally, we just began to completely disregard the guide and take a look at the Forum. It was a beautiful day, in the upper eighties, which is cool for Rome in early July.

One in three travelers liked the tour guide at the Forum. 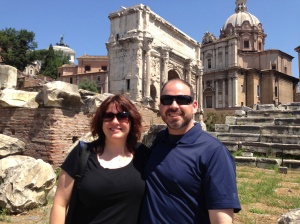 We had a brief period of free time to find lunch before our trip to Vatican City, which gave us our first test at crossing the Roman streets. The Roman traffic is a bit crazy, and many of the crosswalks don’t have crossing lights. Instead, the pedestrian has to enter the crosswalk and hold out a hand to let the oncoming cars know to stop. This process is made even more nerve wracking because most of the cars don’t stop until close to the last minute, and some continue to creep forward while people are crossing. I prefer a bit more certainty when stepping in front of a moving automobile, but, fortunately, all of the motorists did stop. Still, my street-crossing strategy normall involved allowing someone who wasn’t part of our group to step out into the street first so that I could use that person as a buffer. Don’t judge me.

I would have moved closer to photograph this, but that would have involved crossing the streets of Rome.

At the Vatican, we met up with a new guide and then began the herding process through the museum to the Sistine Chapel. Thousands of people were going to see Michelangelo’s masterpiece, which meant we could only shuffle through the museum with people ahead of us, behind us, and beside us. After we saw the chapel, there was some debate as to whether it was as impressive as people thought it would be. I can only speak for myself – I was very impressed. I hate to paint ceilings in my house, and typically I just painting the whole ceiling white with a roller. The ceiling of the Sistine Chapel was big, over 5000 square feet, and Michelangelo decorated the whole thing with much more than white paint and a roller.

We couldn’t take pictures in the Sistine Chapel, so here’s
a picture of the ceiling of the Vatican museum, which was
also decorated in a more elaborate way than the white
ceilings in my house.

After the Sistine Chapel, we toured St. Peter’s Basilica, which was spectacular. No picture or video can convey what it feels to stand in there – the place is humongous. It was very impressive, with even more ceiling decorations. 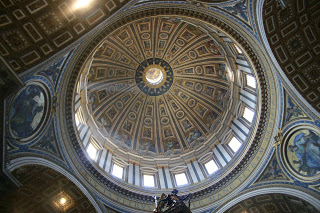 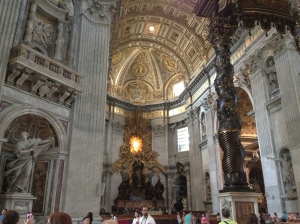 During our free time, most of the travelers got a pre-dinner gelato, which was the start of the biggest problem of the trip. Apparently, one of the gelato servers used the same scoop to serve both chocolate and nutella gelato, and one of our travelers, Molly, has a nut allergy. After Benadryl did not help her improve, off we went to the University of Rome Hospital. At least we think it was a hospital; the scene there was bizarre. First of all, in a city where English speakers are so plentiful that I encountered a barista at a coffee bar who spoke flawless American accented English, the hospital was strangely devoid of fluent speakers. Only a paramedic at the hospital spoke English. Molly managed to check in using a combination of charades and semi-translations from the paramedic. The check-in process was highly informal, with no ID bracelet or forms to sign. We were directed to the waiting room; when we got there, we had to double check that we we in the right place because the were three people in hospital beds in the room waiting to be examined, and two of them looked like urgent medical attention would be appropriate. It was like five Italians had decided on the fly to set up a fake hospital to trick Americanos. Everything turned out all right in the end, and we were able to rejoin the group for the end of their night bus tour of Rome. 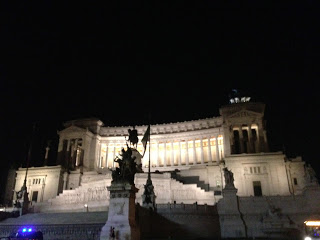 By the end of the night, our travelers were really, really done with sightseeing and ready to catch up on all of the sleep that they had missed over the week. 24 hours of travel back to Richmond provided lots of opportunity for rest. 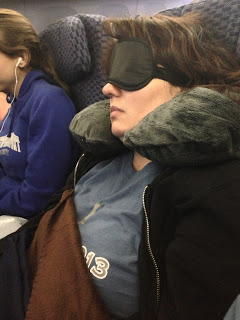 At about 10pm, we landed in Richmond. It was a great trip, but we were all completely exhausted. Fortunately, we have Summer Break to overcome the jet lag.