I initially thought I’d be able to blog this while we traveled in Europe, but, as it turns out, free wifi access in Europe is awful. On top of that, the pace of this trip was very, very fast. So I took some notes and used the pictures to jog my memory a bit. I highly recommend that anyone going to Europe take an unlocked phone and buy a European sim card with a data plan.

After the Florida group arrived (their first flight was cancelled), we headed downtown for dinner. And nothing says dinner in London like…

Some of the people on the trip were genuinely outraged that the tour company had served a hummus and chicken dinner, mainly because, never having eaten hummus, they wondered if they were being served paste. I actually liked the dinner, but I will have to agree that it was an odd choice for London fare.

After dinner, we went to Covent Gardens, a shopping, dining, and theater section of London. That gave people who, say, weren’t satisfied with the hummus dinner a chance for a second dinner.  In addition, there were also some people doing things like singing through traffic cones, giving those students who have been to Carytown a taste of home.

Here’s Laura, right before we realized that the only public restroom in the area was a pay restroom. There was even a turnstile to prevent people from breaking in. Fortunately, in London, there was always a Starbucks nearby with a free bathroom. 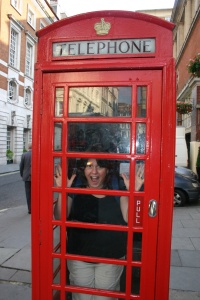 Or, if there was no Starbucks around, there were plenty of phone booths.

The following day, the tour really began. We woke up for a continental breakfast at 8 and then took a bus tour down to Buckingham Palace. Along the way, we saw many of the sights that we missed as a result of the wait for the Florida group – the Tower Bridge, St. Paul’s Cathedral, the monument and more.

When we got off the bus, we followed our pink umbrella carrying guide to Buckingham Palace.

Once there, we unleashed our teenaged paparazzi on the Palace guard.

After a glimpse of the Palace, we split the party. Some people had signed up for the Windsor Castle trip and went with Laura.

Most of the rest of the kids stayed with me for a more modest tour. After perilously navigating through a park with only a paper map and no access to Google Maps (another reason to get a European sim card), we went to Westminster Cathedral.

Walking from Westminster, we saw Big Ben and headed along the river to the Strand. 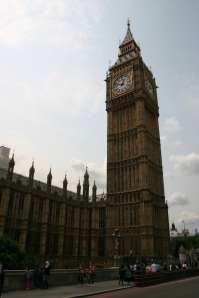 As we were making our way up the river, some members of the group realized they were hungry.

The Eye does not interest me. FOOD interests me.

When teenagers say they are hungry, they mean it is time to eat NOW. Some members of the group began to look longingly at every street stand that we passed; the only thing that stopped them from eating there was their lack of ready cash.

Once we reached the Strand, we stopped at literally the first restaurant that we came across, a Pret A Manger with one open table.

After lunch, we continued down the Strand; about 3/4 of the way to the end of the street I made a serious tactical error and allowed the group to go into H&M because they insisted that there were special British clothes in this store that were unavailable in the States. In the day’s second miracle, the girls were finished shopping in about a half an hour and we walked through Trafalgar Square to Piccadilly Circus.

The pace of the trip, as I said, was very fast. Unfortunately, because of the problem with the Florida group’s flight, the pace of the London trip was REALLY accelerated, and we saw almost nothing in depth. 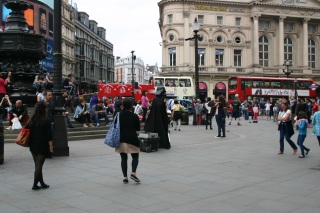 Along the way, the kids realized that they were suffering from severe Internet withdrawal, and we ended up, against all odds, in a bookstore that provided free wifi that worked.

Finally, we walked down Picadilly to dinner. By that time, most of the group were done with walking for a while. 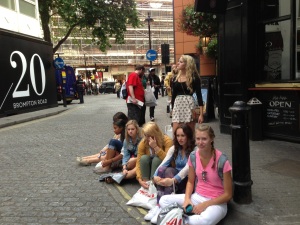 Dinner was fish and chips, which was more favorably received than the hummus. However, one of our students had some interesting ideas about how to improve the dish by spicing up the batter and some kind of marinade. So, get on that, British.

We wrapped up the evening with a Jack the Ripper tour. As I said, there had been a lot of walking on this day, so there was a varying level of attention paid to our guide.

Next up – our Eurostar train ride to France and the first evening in Paris.