Jim and I started the day at Joe’s Cafe. The very friendly owner/cook insisted that we come into the kitchen to see him prepare his specialty: biscuits and gravy. Needless to say, we were not hard sells and immediately ordered the very meaty biscuits and gravy. 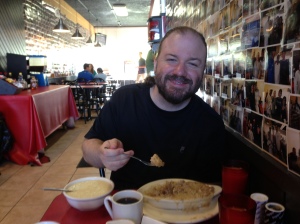 Jim, shortly before his biscuits and gravy, grits, and hash browns induced a tragic food coma.

After filling up on ultra-meaty biscuits and gravy, we headed out to our first hike, Fifth Water Hot Springs in Diamond Fork Canyon, carelessly neglecting to bring toilet paper. I had found out about this hike form someone I know very well, someone who, in fact, hiked this trail naked, wearing only hiking boots. There are several reasons I can’t imagine doing this. First, this is a crowded hike, and the Mormon youth group that consisted of about 20 teenaged girls would have been terrified by my unadorned manliness. Second, I need a certain amount of support and shielding from chafing when I’m hiking over 2 miles that only the appropriate clothing can provide. The Mormon youth group probably would have been even more appalled by my raw thighs than by my unadorned manliness. Third, the powerful sun would have reflected off my pale body, setting forest fires everywhere. 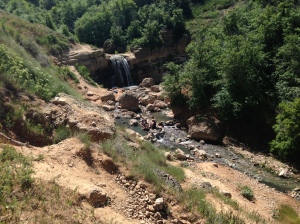 The hike was easy and scenic, and we made our way to the hot springs pretty quickly. The hot springs are depicted above, and the springs were very popular on a Saturday morning. Apparently, though, they were not popular on this day with the naked, skinny-dipping hikers that I’ve heard about. 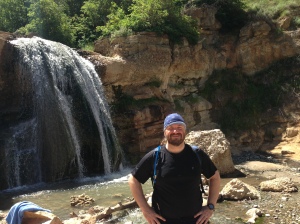 Jim, appropriately clothed, in front of the waterfall at the hot springs.

Oh… I thought we were skinny dipping here…

While hiking back out, Jim and I had a collective “Jerry moment,” named in honor of Jerry Kuthy, who does not have a working short term memory. After Jerry’s last hike, I pointed out the road that Jerry had walked across during the hike. Jerry’s response: “We crossed a road?” In the case of the hot springs hike, neither Jim nor I had created a memory of the bridge we had to cross, which inspired a moment of panic. After taking a minute to consider that we were still on the trail and that there were no other trails, we made our way to our car, counting ourselves fortunate to remember its location.

On our way to the next hike, Stewart Falls, we passed Bridal Veil Falls. That’s how much of Utah is; you will just be driving around and see something that is spectacularly awesome.

The Stewart Falls hike does involve about 1000 feet of elevation gain (and loss), but web sites describing the hike claimed that it was “mostly level.” It’s more accurate to say that the hike is level in stretches with some steep elevation gain, especially near the waterfalls.

One guy we saw was doing the hike with a rolling suitcase. I neglected to take a picture of him, so here are some mountains instead.

The falls were incredible though – the most amazing waterfall that I have seen up close. It’s a two-tiered waterfall, and when the water hits the ground it sends out spray that you could feel from where I am standing in the picture.

See those people on the ledge behind me at the second tier of the fall? That’s how people die.