This picture I took of the ocean is the only way that some people will ever see the water. No, really.

Next on the Odyssey was the annual journey to the Outer Banks with Jason, Jim, Charles, John, Dave, and Jerry. Laura refers to this weekend as “Big Geek Weekend,” but we refer to it more succinctly as “Big Weekend” to emphasize its awesomeness. However, Laura is correct – the weekend is about geekiness of several types – video games, board games, and worse.

These activities are all held in a beach house owned by Jason’s dad in Duck, in the Outer Banks of North Carolina, and there is so much of a focus on geekiness that some people never see the ocean. In fact, one member of the group who had attended Big Weekends for years was surprised one year to find that there was a pool at the Beach House.

Where did THAT come from?!

Obviously, a lot of time is spent indoors away from the cancer-causing light of the sun doing things like playing games. This time, so many of Jim’s board games were making the trip that we were concerned that we wouldn’t be able to get all of the people to Duck. That’s right – two SUV’s didn’t have enough storage room for seven guys and their luggage for a three-night stay in Duck. Fortunately, we could keep Jim’s games safely in the car and use my car-top carrier to store non-essentials like clothes and toothpaste. And Dave. 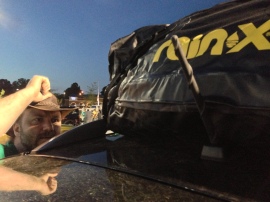 “There’s some unwanted touching of my antenna. No means no, car-top carrier.”

The car top carrier helped Jim get all of the games he wanted down to the beach, enabling him to continue the tradition of losing at his own games. Jim is pictured losing at his favorite game of all time, Dune. Earlier, Jim lost at Spartacus. Later, he lost at Cards Against Humanity. Thanks to the car-top carrier, all of the losing that Jim loves was possible. 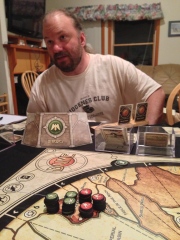 “There are two ways this can end. I can lose painlessly, or I can lose very painfully”.

One problem this weekend – the air conditioning was broken. How would we withstand the brutal April temperatures without AC? Not even our skilled attempt to solve the problem by turning the air handler off and then turning it back on (Jason is an IT guy, after all) had any effect. Fortunately, after enduring the 83 degree temperatures for almost 12 hours, the weather turned in our favor. Crisis averted. 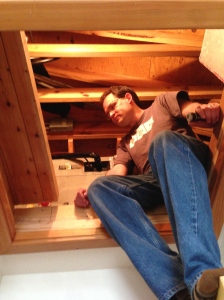