Saturday, June 26 was game day, a day fully planned by Jim. This included the creation of an elaborate system for choosing the games, a system designed below in O’Hare airport after we missed our flight to Richmond from Colorado.

Why was a system needed? How else can you decide whether to play the Battlestar Galactica board game, Arkham Horror, Last Night on Earth: the Zombie Game, The Age of Conan, or some combination of the above? Needless to say, Laura stayed home, in part because Jim’s ambitious game-playing schedule did not explicitly set aside time for dinner. 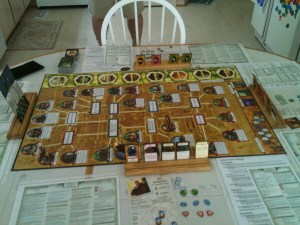 That’s the Arkham Horror board. After the requisite hour of instruction on how to play the game (Ok, it was 45 minutes) we managed to seal enough gates to prevent Nyarlathotep from coming to this world. Take my word for it, that would have been bad. Stores would have closed and stuff. 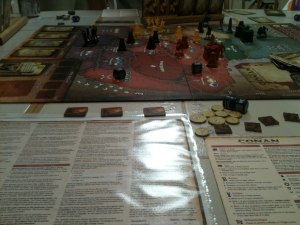 At the end of the day (almost literally), I won the game, and that made it all worthwhile. At least that’s what I told myself as I left to get groceries from Walmart at midnight.